Priti Patel has been cleared of bullying staff by the Cabinet Secretary just days after a former Home Office mandarin who sparked the inquiry launched legal action against her.

In addition the review, presented to Boris Johnson on Monday, found the Home Secretary had not breached the ministerial code.

‘They have looked at all the claims and found nothing,’ a Whitehall source told The Daily Telegraph. ‘They trawled through lots of material but found no evidence.’

Priti Patel has been cleared of bullying staff throughout government departments after a probe by the Cabinet Secretary was launched last month  (pictured: speaking at the coronavirus daily briefing earlier this month)

A formal investigation into her treatment of Sir Philip Rutnam, formerly the most senior civil servant in the Home Office, and other staff was launched last month.

He had resigned alleging that he was the victim of a ‘vicious and orchestrated’ campaign in a dramatic televised announcement on the BBC.

Sir Philip’s claims had prompted an avalanche of claims against Mr Johnson’s highest ranking female minister, all of which she denied.

Among them, were that she ‘dressed down’ staff in front of their colleagues and asked: ‘Why is everyone so f***ing useless?’ 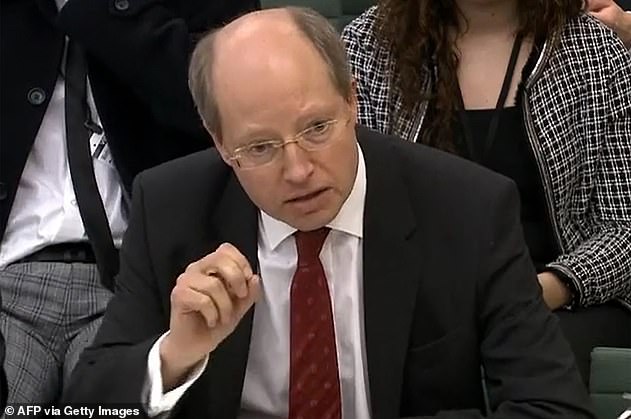 The Prime Minister gave his full backing to Ms Patel, telling the Commons last month: ‘The Home Secretary is doing an outstanding job … and I’m sticking by her.’

In an email to staff last week Ms Patel thanked Sir Philip for his work but added that it was ‘time for the Home Office to come together as one team.’

In the message, Ms Patel said she ‘deeply cared’ about the ‘well-being’ of her mandarins and held them in high regard.

Sir Mark’s report is to be announced later this week, however the full findings are unlikely to be revealed to the public. It comes after Labour urged the Government to publish the dossier in full.