The Democratic governor of Michigan, Gretchen Whitmer, has announced she is to rescind a state contract on tracking the spread of coronavirus that had been awarded to a Democratic consulting firm.

Whitmer’s decision to hire a Democratic political firm to run a public health project drew an immediate backlash after it was announced on Monday.

The firm, Great Lakes Community Engagement, is run by Mike Kolehouse, a Democratic political consultant who had made unsavory comments about President Trump in recent weeks. 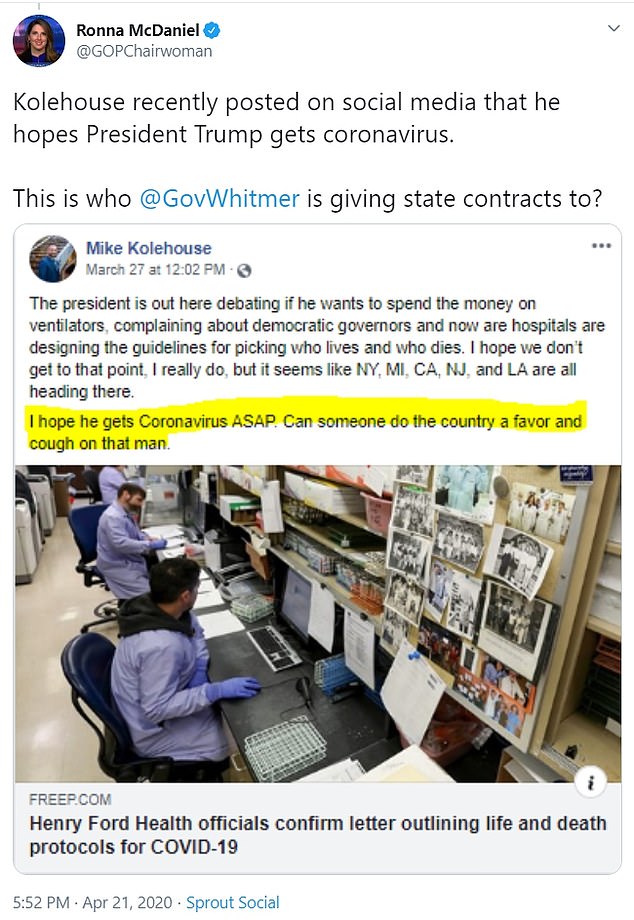 Kolehouse wrote in a tweet regarding Trump in March: ‘I hope he gets coronavirus ASAP. Can someone do the country a favor and cough on that man?’

The consultancy firm had planned to use software that is also used by a Democratic data firm that is also working to help get the governor reelected.

Republican’s then weighed in and accused the governor of surreptitiously obtaining data that might be useful for her political campaign under the guise of a healthcare project.

Whitmer’s profile has grown in recent weeks mainly through clashing with President Trump.

The issues over the coronavirus contract began on Monday evening after Republicans questioned why Democratic political campaigners had been hired to run a public health project.

Whitmer’s office has acknowledged that usual protocols for selecting vendors were  bypassed when the no-bid contract for coronavirus contact tracing was awarded by to Kolehouse’s firm.

Michigan’s State Emergency Operations Center then stated that the firm, Great Lakes Community Engagement, had not been approved for the contract and that another organization would be selected instead. 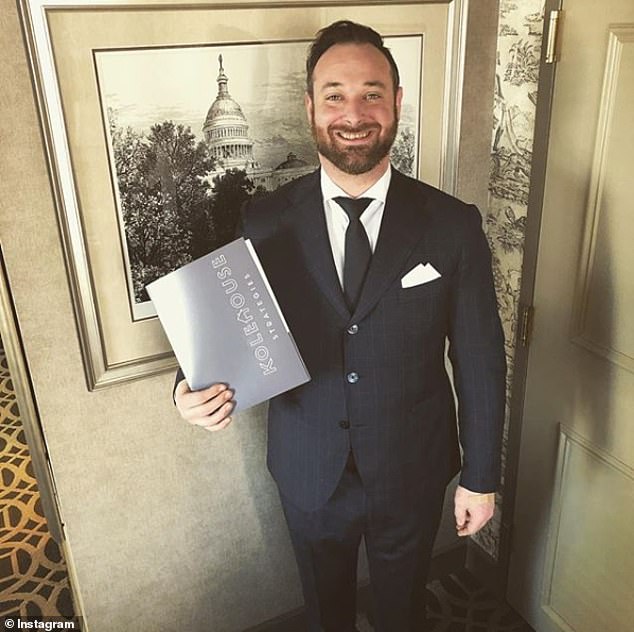 The firm, run by Democratic consultant Mike Kolehouse, pictured, was going to help track down contacts of infected people 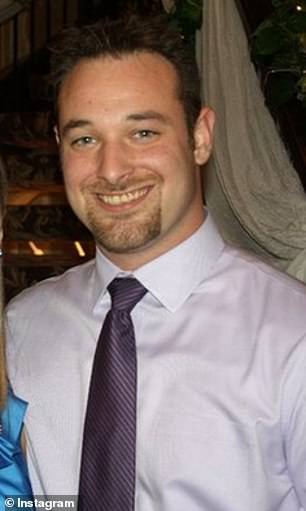 Kolehouse, a Democratic political consultant had previously tweeted in March: ‘I hope he gets coronavirus ASAP. Can someone do the country a favor and cough on that man?’

‘This contract should have been approved by the State Emergency Operations Center,’ a Whitmer spokesperson said to Fox News. ‘This issue is being corrected, and a different vendor and software platform will be selected by the SEOC. The state is committed to ensuring this important tracing work can begin quickly to help save lives, while also ensuring that public health data is safe and secure.’

However, according to Crain’s Detroit, Great Lakes Community Engagement had already been working on the project for the past three weeks despite not being announced in public.

The firm was using software by NGP VAN which is also used by a number of Democratic nonprofit organizations. although the company has said it did not have a direct contract with the state of Michigan.

‘We were not contracted with the state of Michigan at any point,’ Kamin-Cross said. ‘Beyond that, we’re unfortunately unable to provide details on specific clients.’ 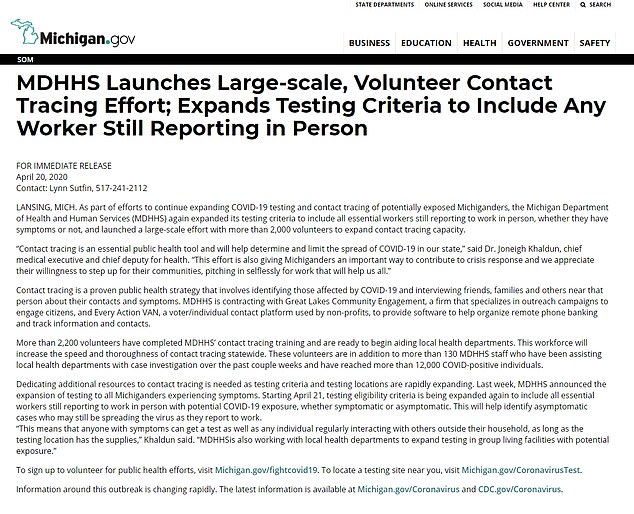 The decision to use a Democratic consultancy firm was made public in a press release on Monday, but it was revealed the firm had already been working for three weeks on the project

NPG VAN is a privately-owned technology provider to Democratic and progressive campaigns and organizations and boasts on its website of helping to elect President Barack Obama and Senator Elizabeth Warren.

One local county commissioner, Wes Nakagiri who was a Tea Party activist, accused the state of politicizing the contact-tracing project and raised privacy concerns to the Detroit Free Press.

Nakagiri accused the state’s contact tracing effort as a way to collect ‘confidential personal medical information of Michigan citizens and share it with Democrat candidates.’

He called the scheme an ‘insidiously clever and deceitful way to take political advantage of the biggest public health crisis of our lifetimes.’

Nakagiri found out about the software after being trained to work in the program as a volunteer, and has  accused Whitmer of using the coronavirus tracking project for political gain adding he was ‘troubled to see health information was being stored in a Democrat-aligned database.’

Whitmer, meanwhile, has insisted her focus now is on managing the crisis that has devastated her state’s economy and killed 2,700 people.

In an interview with Associated Press on Tuesday she said Michigan, along with other states, is struggling to conduct sufficient testing and urged Trump to use all his powers to force manufacturers to produce more test swabs. She spoke as some Republican governors have begun the process of reopening the economy without waiting for more testing, moves that gives her ‘great pause.’

‘I know that we´re going to have to be really methodical and data-driven about what sectors of our economy we engage in when it is going to be a slow re-entry. Our biggest concern, of course, is a second wave,’ said Whitmer, who may relax her stay-at-home order beginning May 1. ‘The worst thing would be for us to spike the football and think we are outside of the danger zone, and to re-engage and find another peak of COVID-19.’

More than 1 million Michigan residents – about a quarter of the state´s workforce – have filed for unemployment since the outbreak began. Whitmer said the state has the resources to pay jobless benefits ‘for now’ but that Michigan, like every other state, will need more help from the federal government.