Belinda Mulcahy, 46, and Joanne Sheperd, 41,ere left ‘speechless’ after a barman wrote ‘lesbians’ on their bill at a holiday resort pub

A gay couple were left ‘speechless’ after a barman wrote ‘lesbians’ on their bill at a holiday resort pub.

Belinda Mulcahy, 46, and Joanne Sheperd, 41, were disgusted when they saw the note during a night out at Hafan y Mor holiday park near Pwllheli, North Wales.

The pair were celebrating Ms Mulcahy’s birthday when they asked for their bill and saw the description printed under their table number.

Ms Sheperd, from Whixall in Shropshire, described the barman’s behaviour as ‘horrifying’.

The pair have no idea why he made the assumption they were lesbians as they were not acting like a couple.

NHS worker Ms Sheperd told the Sun: ‘We hadn’t done anything overt.We hadn’t been kissing or holding hands. We could have been friends.

‘So the fact he decided to identify us as lesbians was a bit horrifying. We were shocked.’

After seeing the note, the couple complained and were given free drinks by way of an apology by management. 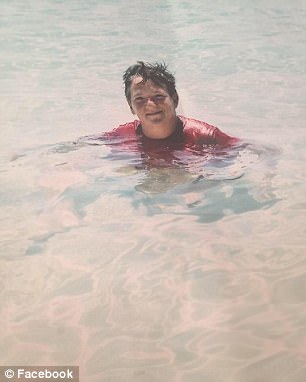 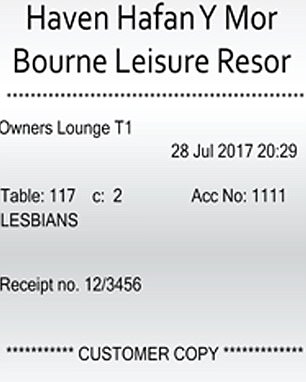 The couple were out celebrating Ms Mulcahy’s birthday, when they were given the receipt

Haven site Hafan y Mor has formally apologised for the incident and has vowed to launched an investigation.

A spokesman said: ‘This incident should not have occurred and we are sorry for any distress caused.

‘Following an investigation conducted by management, the individual concerned has been subject to internal disciplinary action.’