Who cares about Thanksgiving! Shoppers are already camping outside stores to bag Black Friday deals

Diehard bargain hunters have already lined up for Black Friday, passing on Thanksgiving dinner in favor of deals.

Nearly every major retail chain will open its doors on Thanksgiving Day this year, in an arms race to lure holiday shoppers that seems to creep earlier and earlier every year. For some shoppers, being first though the door has become a tradition.

In Gastonia, North Carolina, John Chapman and his childhood buddy pitched a tent outside of the Best Buy on Monday night, ensuring their first spot in line in a tradition they’ve carried on for 15 years.

‘You don’t really need to camp out anymore. You can get everything online before Black Friday,’ Chapman told WCNC. ‘But we just enjoy doing it. We cook out, watch football and have a good time.’ 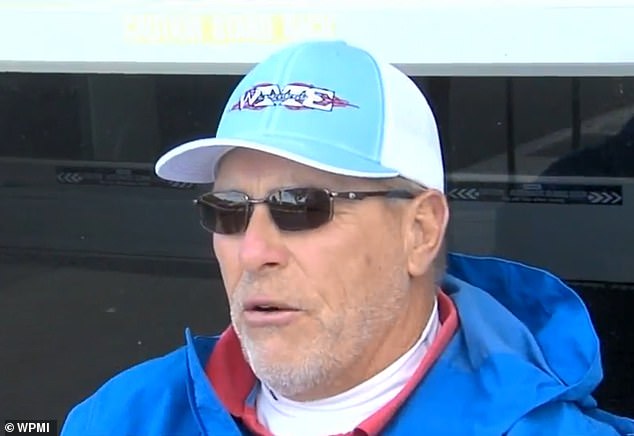 ‘About four years ago, or five years ago, I was number four. And I told ’em, if I come back I’m going for number one,’ Powell said

In Spanish Fort, Alabama, softball coach Wren Powell set up camp outside of Best Buy on Wednesday morning at 8am, securing first place in line in what has become an annual tradition for him.

‘About four years ago, or five years ago, I was number four. And I told ’em, if I come back I’m going for number one,’ Powell told NBC15.

Powell came prepared for the chilly weather with a portable heater and blankets. He said he planned to buy laptops and a new TV for his grandchildren.

Early lines and campers were also spotted outside of Best Buy stores in Florida, Hawaii and Missouri.

A row of tents spotted near a Best Buy in Los Angeles on Tuesday was thought to consist of Black Friday deal seekers, though this could not be independently confirmed. 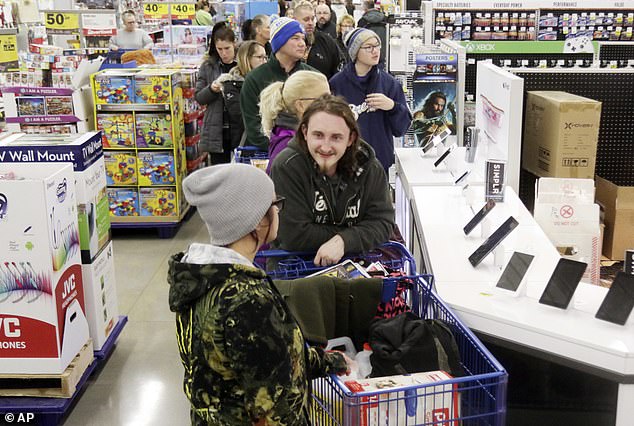 Troy Kemp smiles while waiting in line in the electronics department while shopping for Black Friday deals on Thursday at Meijer in West Bend, Wisconsin

This year, JC Penny is among the earliest to open, throwing open the doors to eager shopper at 2pm on Thanksgiving and remaining open all the way until 10pm on Black Friday.

Holdouts to the trend of opening on Thanksgiving Day include Costco, Home Depot and Nordstrom, all of which will remain closed for the holiday until Friday morning this year.

A National Retail Federation survey projects that 164 million people will go shopping over the five-day holiday weekend – with 21 per cent, or 34 million, planning to shopping on Thanksgiving itself.

While 65 per cent of the shoppers said they hit the stores on Thanksgiving weekend in order to take advantage of sales, a full 26 per cent said they do so because it has become a tradition with family and friends.

‘We’re seeing a change in how the younger consumers see the weekend,’ said Phil Rist, executive vice president of strategy for Prosper Insights. 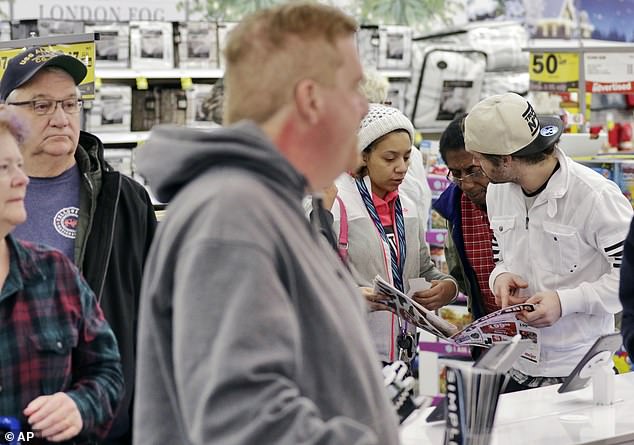 Shoppers look at an advertisement while they wait in the line in the electronics department while shopping for Black Friday deals on Thursday at Meijer in West Bend, Wisconsin

‘Compared to older generations, younger consumers under the age of 35 are more likely to be attracted by the social aspects of shopping over the weekend or by the fact that it is a family tradition.’

Though retailers love the heavy foot traffic over Thanksgiving weekend, many are trying to find ways to cut down on chaos and long checkout lines.

Walmart, Target and other large retailers are sending workers throughout their stores this year to check out customers with mobile devices. And at Macy’s, shoppers can scan and pay for items on their own smartphones.

J.C. Penney, which has been offering mobile checkout for years, says it sent an additional 6,000 mobile devices to stores this year so workers can check shoppers out quicker, like when lines get long on Black Friday.

Other stores are testing it for the first time: Kohl’s says iPad-wielding workers will roam 160 of its more than 1,100 stores.