What a difference five years make.

American Idol 2018 viewers are loving the sassy and powerful performances from drag queen Ada Vox so far, but can’t help thinking she looks and sounds familiar. That’s probably because she is!

In fact, Ada Vox auditioned for American Idol back in 2013 when she was known as Adam Sanders.  In one of his Season 12 performances, he got a standing ovation from three of the four judges with his rendition of Etta James’s I’d Rather Go Blind. Despite this, he got eliminated after Hollywood week. 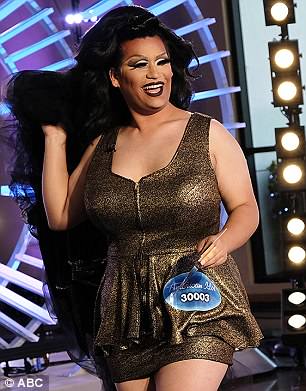 Adam did not let that deter him from his dream and when he heard the show was coming back to ABC, he decided to audition again as his alter ego Ada Vox. He said: ‘I was an OK singer then – I was. But I’m a hundred times better now than I ever was then. I’m vocally better, I’m a better performer, I’m a better entertainer, I’m more prepared as an adult now to take on the challenges that come with a competition like this.’

On the March 25 episode of American Idol, Ada wowed the judges with her rendition of House of the Rising Sun, and Lionel Richie, Katy Perry and Luke Bryan didn’t hesitate before giving her a golden ticket to Hollywood.

After her performance she said: ‘I’m not here to play with anybody — I’m here to chase my dreams and make them come true.’

But who is Adam Sanders aka Ada Vox?

Adam was born in San Antonio, Texas, and works at a seafood restaurant by day and drag queen by night. The 24-year-old is a University of Texas graduate and lists his influences as Lady Gaga, Beyonce, Aretha Franklin, Patti Labelle and more.

After he appeared on Season 12 of American Idol, he started getting death threats on social media. He revealed on this year’s show right before his audition: ‘People attacked my weight, my sexuality, telling me that I was horrible, that I sucked, that I don’t deserve to be here, that I shouldn’t be who I am. And I let it get to me in a wrong way. It killed me inside. It killed me inside almost as much as people were telling me that I should kill myself…I was contemplating lots of things that I shouldn’t have.’

Adam spoke to MySanAntonio.com about how he got the idea of performing in drag after participating in a San Antonio Gay Pride Event: ‘The drag queens sparked my interest. None of them were actually singing, they were all lip-synching.’

In an interview with local news station KSAT 12, Adam spoke about making the transformation to Ada Vox: ‘Since then I’ve gone through an evolution. I’m now a part-time woman. And I’ve grown so much as an entertainer, as a performer, as a singer because of the show and the experiences it’s allowed me.’

He also revealed he had to have brain surgery after developing a cyst at just eight years old, and that is when his love of music started.

‘That was the only time I would have relief from the pain that I was dealing with at the time. It was all around the same time American Idol first aired as well. So it all worked out that Idol became a part of my dream.’