Andrew Gillum pulled off a surprise victory in the gubernatorial primaries in Florida on Tuesday.

Now the Tallahassee mayor is being bashed by Donald Trump on Twitter. On Wednesday, the President tweeted about Congressman Ron DeSantis, whom he’s backing, taking on the ‘failed Socialist Mayor’.

‘Not only did Congressman Ron DeSantis easily win the Republican Primary, but his opponent in November is his biggest dream…,’ Trump tweeted. 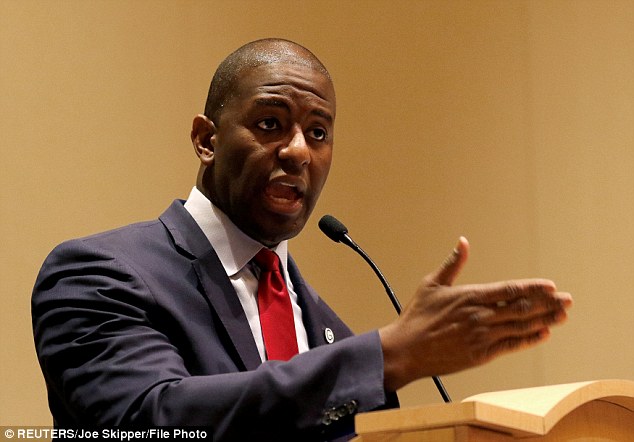 ‘A failed Socialist Mayor named Andrew Gillum who has allowed crime & many other problems to flourish in his city. This is not what Florida wants or needs!’

What Trump, 72, didn’t mention, was that Gillum defeated democratic candidate United States Representative Gwen Graham by an unofficial three percentage points, according to the Miami Herald.

In fact, in Miami-Dade and Broward counties, Gillum overtook Graham by more than a two-to-one margin.

His victory in the midterm primary, which saw the largest turn out of any midterm primary in Florida’s history, suggests that he is in fact what the people want. At least those voting Democrat.

Who is Andrew Gillum?

Andrew Gillum was born on July 26, 1979 in Miami, Florida. He’s one of seven children born to Charles and Frances Gillum.

Gillum attended and graduated from Gainesville High School before moving on to Florida Agricultural and Mechanical University. His career in politics took off before he was able to finish his degree.

At 23-years-old, Gillum was the youngest person elected to the Tallahassee City Commission.

During his time as city commissioner, Gillum backed an initiative called the Digital Harmony Project, which supported local businesses and technology partnerships.

The initiative won the significant achievement award from the Public Technology Institute. It provided Nims Middle School sixth and seventh graders with new computers, internet access and online curriculum in their main subjects.

Congratulations to @AndrewGillum on his victory. Tonight, Floridians joined Andrew in standing up and demanding real change and showed our nation what is possible when we stand together. Let’s make history this November and make Andrew Gillum the next Governor of Florida.

Gillum also supported the opening of the first ever teen center in Tallahassee. The facility is called The Palmer Munroe Center and serves as a safe space for local youths. It also serves as a restorative justice program, which has been proven to increase offender compliance and decrease the likelihood of repeat offenses.

In his position, Gillum put $5.6 million back into Tallahassee’s economy, helped local businesses and created jobs.

He became the mayor of Tallahassee, Florida in 2014.

While in office, Gillum supported the Ban the Box campaign, which gives all applicants a fair shot at employment, called for investments in transportation in mid-size American cities, launched the 1,000 Mentors Initiative, and created a program that called for increased law enforcement visibility and stronger bonds between police and their communities amid shootings by police.

Gillum famously took on the National Rifle Association in court after they sued the city of Tallahassee over an ordinance that outlawed firearm use in public parks. He won.

Congratulations to @AndrewGillum! On to November when we’ll return the power to the people in Tallahassee and Washington!

He later said that his victory over the pro-gun group ‘means the next time [the NRA comes] after another community with a lawsuit, precedent will be on our side, and they’ll have to think twice’.

As mayor, Gillum has been outspoken in his support of gun control and related laws. He’s called on Republican Governor Rick Scott to end the state’s highly controversial Stand Your Ground gun law.

He’s also a supporter of a ban on assault weapons.

Now, Gillum has his sights set on a gubernatorial position.

The 39-year-old pulled off a surprise win in the Democratic primary election. He’s now set to take on Ron DeSantis in the general election.

Andrew Gillum is married to R. Jai Howard. She’s a graduate of Florida Agricultural and Mechanical University as well.

The pair tied the knot in 2009 and have three children: Jackson, Caroline and Davis.

He’s also been outspoken in his support of Puerto Rico, which is still reeling from the hurricane that ravaged it months ago.

Gillum’s stance on criminal justice is that offenders who have done their time ‘should be given a second chance’.

His website reads: ‘Too often, our society perpetually punishes people for one mistake, and creates barriers to positive re-entry.

‘Andrew supports the legalization of marijuana in order to generate new revenue to pay for teacher and instructional staff pay increases and to reduce the mass incarceration of people with low-level drug offenses.’

Additionally, the page states: ‘Andrew wants to reform our bail system so that we stop disenfranchising people of lower economic means, and work with the legislature to find common ground on minimum sentencing reforms.’

Gillum hopes that as governor, he can appoint three new Supreme Court Justices that share his, and the state’s, values.

He’s committed to addressing economic issues, specifically ‘the devastating inequality that has hurt our working families, who are forced to live paycheck to paycheck and feel that the opportunity to get ahead isn’t available to them anymore’.

‘Andrew has proposed the “Fair Share for Florida’s Future” Plan to finally make real investments in our public schools and working families — and ask the richest corporations to pay a little more of their fair share,’ his site states.

Gillum wants to adjust the state corporate tax level to 7.75 per cent. His website says this will help bring back $1 billion to invest in Florida.

On education, Gillum is a supporter of the public education system, which he believes is ‘the best path to equal opportunity’. He feels, however, ‘that Florida’s education reform has been a failure’.

‘Our education system and its over-reliance on high-stakes testing has failed our children, our parents, our teachers and our state,’ his website states.

Gillum has proposed a $1 billion investment in Florida public schools, which will help with early childhood education, give teachers a much-needed salary increase and restore public school construction funds. It will also help with vocational training.

‘Andrew believes that the best way to address the impacts of climate change is to embrace a plan to transition Florida to clean energy as rapidly as possible,’ his website says.

Gillum is a supporter of gun reform and has been pushing for ‘more common sense gun safety policies including a ban on assault weapons, large capacity magazines, and bump stocks’.

Gillum believes that healthcare should not be ‘a privilege’. He supports Senator Bernie Sanders’s Medicare for All plan, which he thinks ‘will help lower costs and expand coverage to more Floridians’.

On immigration, the gubernatorial hopeful believes: ‘Immigrants strengthen our society and have played a vital role in Florida becoming one of the leading economic states in the Union.’

He plans to oppose both Donald Trump and Rick Scott’s immigration policies. He’s been outspoken in his opposition to Trump’s family separations, even joining protesters in Homestead, Florida for a demonstration.

Gillum supports a complete immigration overhaul and the abolishment of Immigration and Customs Enforcement (ICE).

He’s steadfast in his support of the LGBTQ community and wants to lead the charge in expanding domestic partner benefits for City employees.

Amid opposition to same-sex marriages, Gillum invited couples to wed in Tallahassee.

Gillum plans to work to address discrimination faced by these groups throughout Florida.

Lastly, Gillum is a supporter of women’s rights. He ‘would support the state legislature ratifying the Equal Rights Amendment’.

Gillum believes “Florida should make it clear that civil rights will not be denied based on gender.’ He also supports Equal Pay for Equal Work, meaning women should be ‘given an equal opportunity to success at every level’.

In 2018, Tallahassee’s crime rate decreased by 15 per cent, according to the Tallahassee Democrat. The city’s Leon County is still among the highest crime areas in the state, however.

Florida saw an overall decrease of six per cent in crime in 2017.

In 2016, the violent crime rate in Tallahassee dropped by 13 per cent.

In June 2017, the FBI issued a subpoena to Andrew Gillum at city hall, according to the Tampa Bay Times. In it, they requested thousands of pages of various records from different people in the local city government.

Gillum hasn’t been named in any of the subpoenas. Officials tied to the city’s community redevelopment agency have, however.

Adam Corey, one of the lobbyists implicated in the investigation, was a friend and ally to Gillum until 2017 when the politician cut ties with him.

Thus far, Gillum himself is not under investigation.