Who is the AFL’s biggest basket case? North, West Coast and Essendon line up for priority picks

The new clubs got to drink from the priority draft pick trough for years, now the AFL is considering giving the same concessions to established clubs rooted to the bottom of the ladder.

The West Coast Eagles, North Melbourne Kangaroos and Essendon Bombers are all lagging far behind the rest of the AFL for different reasons and barring a miracle, none seem likely to surge up the standings again anytime soon.

Channel Nine journalist Caroline Wilson confirmed that the priority pick situation is being discussed at AFL HQ and the battling Kangaroos are first in the queue to get draft relief.

North Melbourne has been a magnet for disappointment, but do they deserve priority treatment at the AFL draft?

With a percentage of just 60.6, North has slumped toward the bottom of the ladder and has been beaten by at least 60 points in three of its last four matches.

‘The priority pick is back firmly on the table,’ Wilson told Nine’s Footy Classified.

‘They’ve got a lot of issues, North Melbourne, and this is something that is really, really worrying the AFL at the moment.’

However, there is also a school of thought that the Kangaroos’ problems are of their own design and they have the salary cap space to sign free agents to get out of their situation.

The West Coast Eagles are in real danger of collecting the wooden spoon this season as Covid protocols ravage their roster and ability to field a competitive team.

There has been speculation that the Eagles could receive a priority pick on top of what they receive from finishing near the bottom of the table because of the impact Covid has had on them.

The Eagles have not had a top 10 pick since 2010 but now they have an ageing roster coupled with the Covid situation which will require a rapid regeneration of players.

On-baller Tim Kelly said there was no talk of a rebuild in the west just yet, with the playing group remaining focused on salvaging something out of 2022.

‘We don’t think like that. Rebuild is sort of the last thing on our minds right now. The main priority we’ve got now is getting back to our best footy and winning games,’ he said.

The third and most controversial club in the conversation for a priority draft pick is Essendon, even if they appear to be rank outsiders.

The Bombers played finals just last season and are still trying to shake the stigma of the supplements saga that cost them a host of players in the early to mid 2010s.

Even though Essendon has crashed back to earth with just one win from six starts so far in 2022, it would be regarded as a huge call to give them a leg up at the draft. 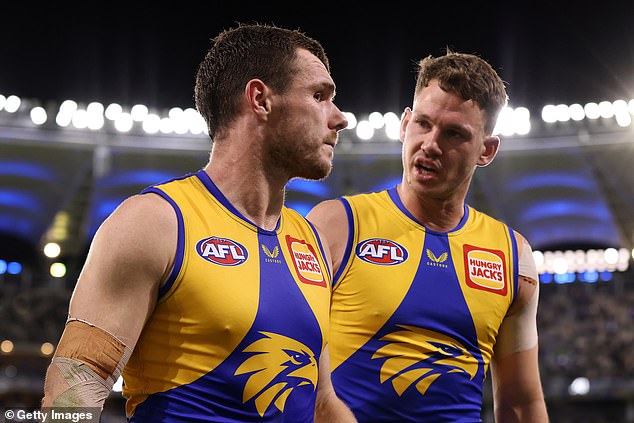 West Coast have been brave in the face of harsh Covid protocols that has seen the club struggle to field a team.

Speaking on The Friday Night Agenda on Seven, Tom Browne and Luke Hodge got stuck into the issue and both laid out reasons why Essendon and North should not get priority picks.

‘In regards to North there is an argument against them getting a priority pick at the end of this year.

‘They gave up, for example, pick 19 or 20 it become for Coleman Jones, they’ve had ample salary cap space to chase a free agent.

‘I think even in recent times they went after Darcy Moore, They’ve famously gone after [Andrew] Gaff and [Josh] Kelly and missed out on some of those guys.

‘Also some of their draft selections haven’t been as good as they could have been in recent years.

‘I know it is a controversial topic but I think we should have an uncompromised draft as much as possible.’ 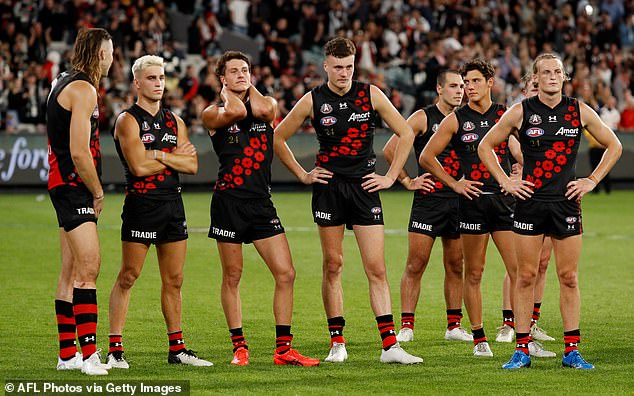 Essendon played finals in 2021 but look miles away from that watermark this season, winning just one game in six starts.

Four-time premiership winner Hodge found the suggestion of Essendon getting a priority pick at the end of this season laughable, even if they have had a shocking start to the year.

‘Did you say Essendon? I could maybe North, given they’ve made a lot of changes,’ he said.

Browne wrapped up the segment by saying neither side deserved a priority pick.

‘Essendon shouldn’t get one either, but they deserve one arguably more than North,’ he said.