Who is the BBC presenter with a love child with a stripper? Social media furiously speculates

Social media is today awash with speculation over the identity of a mystery BBC star accused of secretly having a love-child with a stripper.

Britons are today trying to guess the name of the famous presenter, who is said to have fathered a child with the stripper during a six-month fling.

The ‘mega rich’ prime-time presenter, who is now married, is reported to have signed his famous catchphrase across the woman’s chest when the pair first met in a nightclub.

The pair reportedly met for trysts at fancy hotels on ‘five or six’ different occasions.

But after learning that the woman had fallen pregnant, the mystery man is said to have ‘blocked’ all of her numbers and ‘vanished’ .

The TV personality, who has not been identified, denied paternity of the woman’s daughter and has not paid any child maintenance, the woman reportedly told The Sun.

She claims a DNA test revealed the prime-timer was a familial match to her daughter, but ‘stopped short of a paternal match.’ She suspects he had another relative help him ‘cheat the result.’

The stripper, having signed the gag order, is not allowed to talk about her relationship with the star.

However, she alleges her daughter – who knows her father’s identity – is not covered under the NDA and that once she turns 16 can contact him if she pleases.

Britons are today trying to guess the name of the famous BBC (pictured: Library image of the BBC headquarters) presenter, who is said to have fathered a child with the stripper during a six-month fling

The pair reportedly had a six-month fling after having met a nightclub.

‘He was working on a show in the area when I met him at a nightclub. I went in and asked him to sign my shirt,’ the dancer told The Sun. The specific date and location of their initial meeting was not revealed.

‘He smiled, grabbed the pen and signed his famous catchphrase across my boobs.

‘He then asked for my number and rang me a few days after that.’

She claims the pair met up ‘about five or six times’ over the course of the six months, frequenting ‘penthouse suites of all the nice hotels.’

However, she said everything changed after ‘I fell pregnant.’

The stripper recalled: ‘As soon as I told him he said he couldn’t have kids, and denied she was his.

‘He then blocked all of my numbers, changed his — and vanished.’

The dancer reportedly contacted his lawyer and the broadcaster was ordered to take a paternity test.

‘Everything matched. They were able to say without any doubt that the father was a familial match,’ she explained. ‘But it stopped short of a paternal match.

‘It was a ridiculous situation — the suggestion being that instead of getting pregnant by him it might have been his brother, dad, uncle or grandad.’ 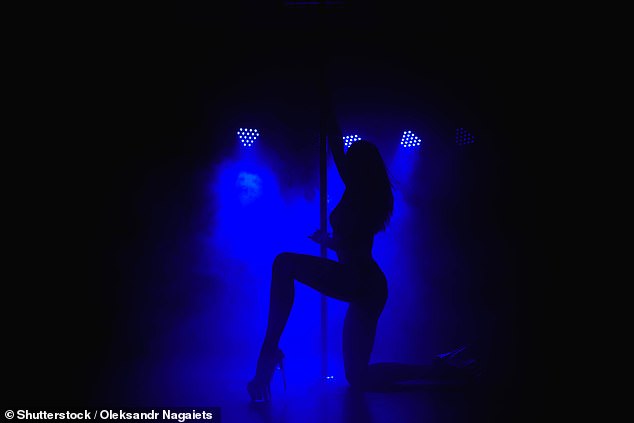 She claims the BBC presenter attended the DNA screening alongside a male relative, despite ‘strict rules’ against doing so.

‘We’ve never been able to prove otherwise but we think the male relative who was with him when he took the test helped him cheat the result,’ she claimed.

Due to the inconclusive paternity test result, the ‘mega-rich’ star was not obligated to pay child maintenance. He also ordered his ex-lover to sign an NDA.

‘He insisted I sign a non-disclosure agreement that prevented me from talking about it. I wasn’t paid any money,’ she recalled.

‘I was left to it, all on my own with not a penny from him. I was young and dumb, pregnant and scared with my first child.

‘I just did what I was told, smiled and signed what I needed to sign and then went on my merry way. Luckily, the NDA only applies to me, and doesn’t cover my daughter.

‘Under the terms of the NDA she is not allowed to try and contact him or talk about him until she turns 16. But when the time is right, she will be able to do what the hell she wants.’

The woman also suspects that she is not the only woman to have been allegedly silenced by the star.

‘There’s quite a few he’s kept quiet, because I know I wasn’t the only one he was meeting up with. It is what it is,’ she argued.

‘There’s a lot of them out there. He was desperate to keep me quiet because he knew it wouldn’t have looked good that he’d got some stripper pregnant.

The dancer added: ‘I don’t have any regrets in life and I’ve got my beautiful daughter from it.’