Who needs Netflix? DIY fans get VERY creative with their newfound free time in lockdown

Who needs Netflix? DIY fans get VERY creative with their newfound free time in lockdown – with builds including a bar in the garage and a picnic table for squirrels

As the Spring days get longer during the coronavirus lockdown, it can be difficult to know how to fill them – but these nifty craftspeople have spent their spare hours very productively.

Bored Panda has collated examples of what DIY fans from around the world have been getting up to with their unexpected free time.

One man turned his cluttered garage into a state-of-the-art bar, while a mother transformed her window into a stained glass masterpiece.

Other examples include building a 6ft 8in Megatron, a character from the Transformers franchise, made out of cardboard, and one man who turned a piece of wood into a brand new dining room table.

Elsewhere someone spent a week building himself a new glasshouse, and a dog owner created a new home for their prized pooch. Here FEMAIL takes a look at some of the most impressive examples. 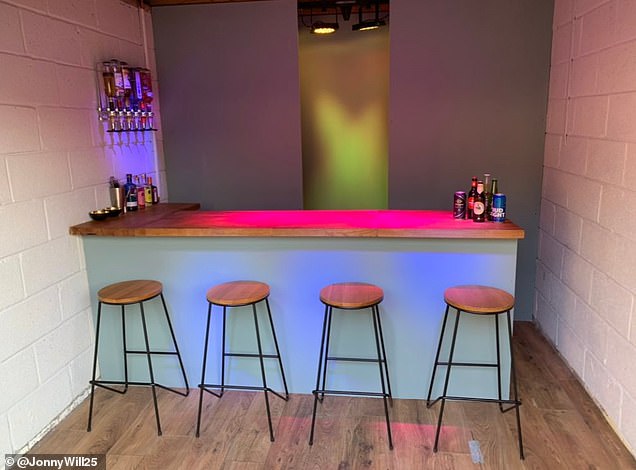 While all the pubs and clubs have shut down for the foreseeable future, this man from South Wales made sure he would always have somewhere to drink in peace. He transformed his cluttered garage into a state of the art bar 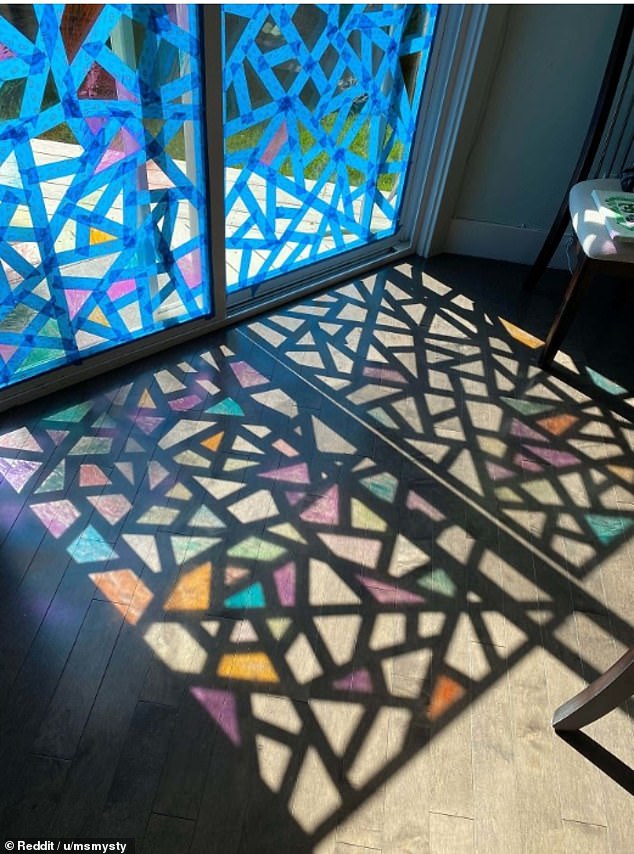 This mother, from San Francisco Bay, decorated her window with blue tape before letting her children colour it in with marker pens. When the sunlight hit the window it created a stunning stained glass shadow effect 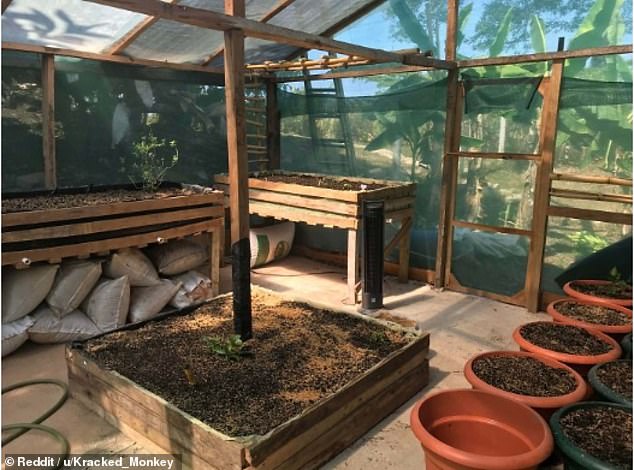 When this man, from Uvita in Costa Rica, needed a place to grow his plants he used wood from the grounds of his home to build himself a greenhouse. The beds are all 30cm thick and he used around 60 bags of compost to make his own soil. It took him the first week of lockdown 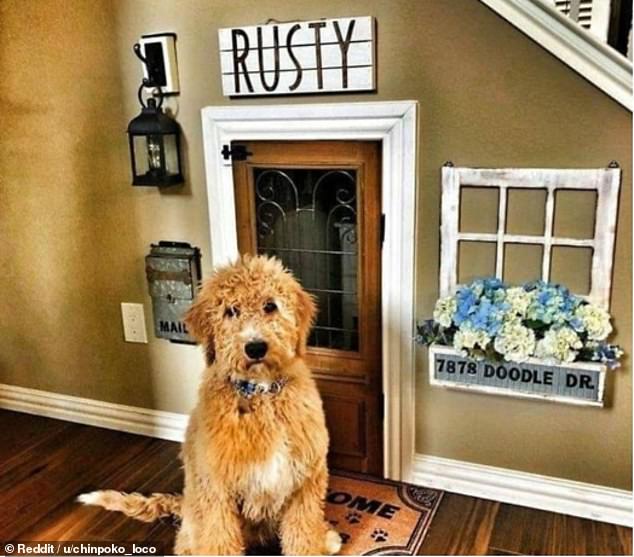 Rusty the dog was gifted an upgrade to his home under the stairs. His owners, from an unknown location, made a window, door, lantern and mailbox for their pooch. They even laid down a welcome mat with paw prints on it 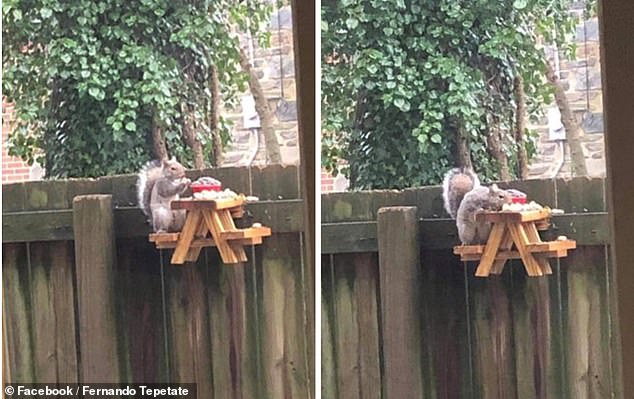 This squirrel gets to enjoy a comfortable seat while it feasts on nuts thanks to a man from Mexico. He created a picnic table for the animal and joked it could host meetings there because there is room for two 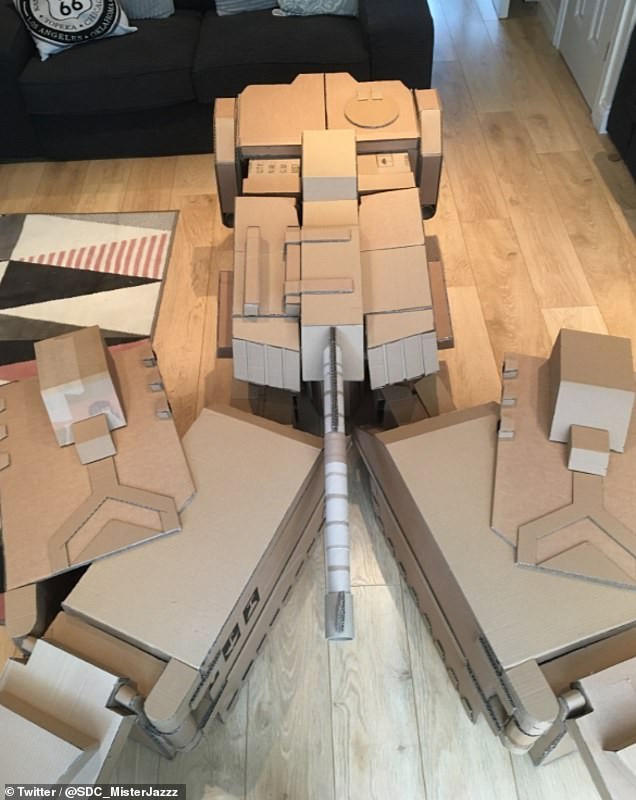 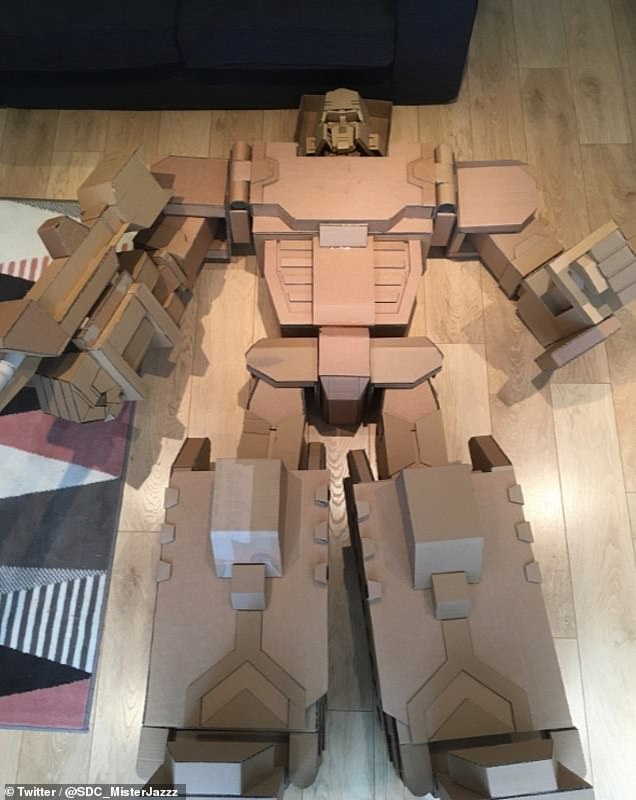 This Transformers fan, from Hull, spent his second week of lockdown in the UK creating a 6ft 8inch Megatron that transformed into a tank. The model was made entirely out of cardboard boxes and loo rolls as part of his school project 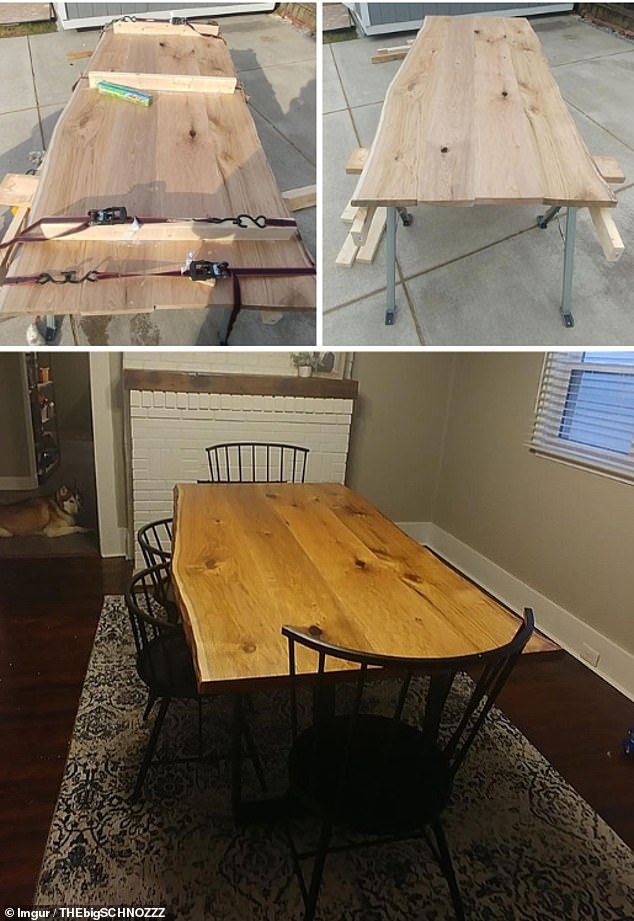 This person, from western New York, used planks of wood to construct this table from scratch. The entire project cost £487 and took 15 hours to complete. The table now has pride of place in his dining room 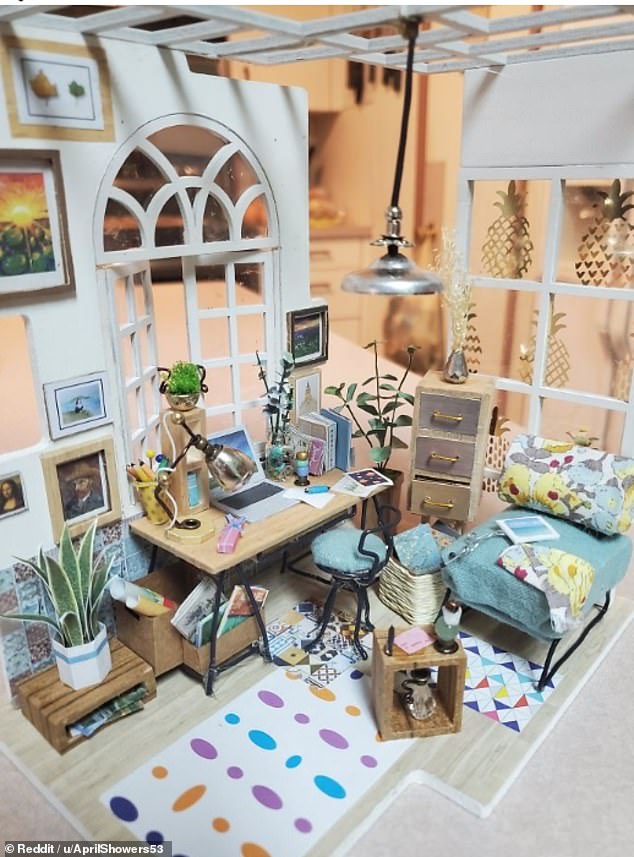 This Reddit user, from North Carolina, bought this kit from Amazon. She made every piece of furniture and even got to add her own touches with the pineapple windows. It took a total of four days to put together. She joked by the end of lockdown she could build an entire apartment 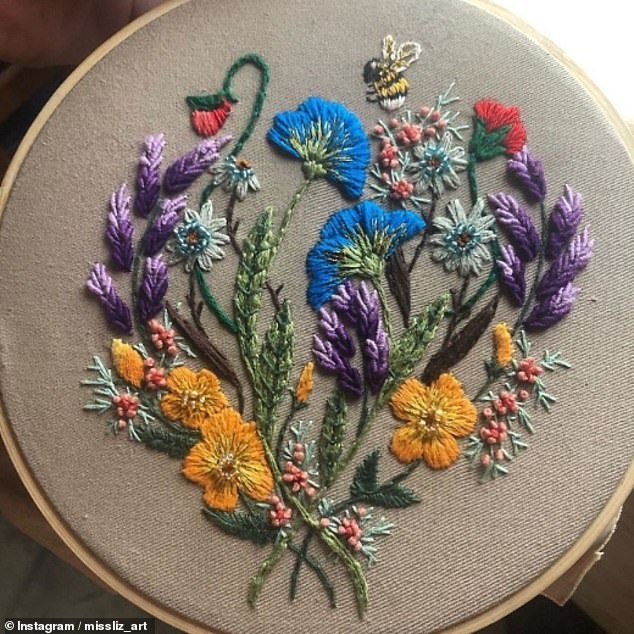 After days of boredom this tattoo artist, from Detroit, embroidered this floral display. She even included a bumble bee at the top of the piece as well as yellow, purple and blue flowers 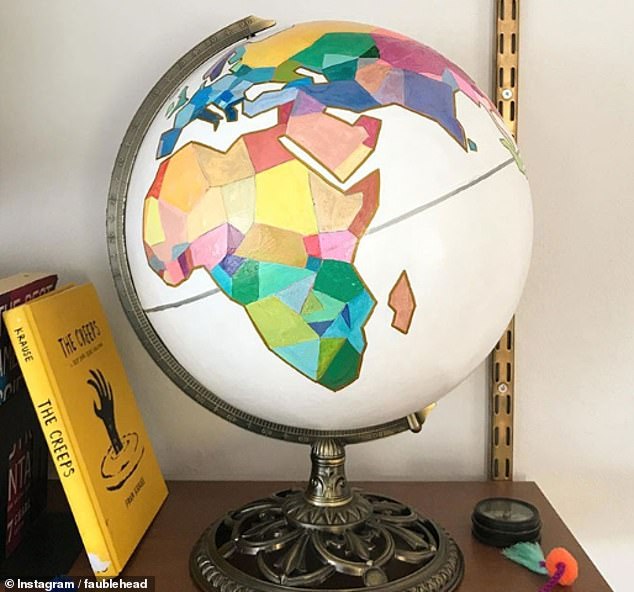 This illustrator from Portland used his free time to draw the outlines of the world’s countries in dramatic colours. He commented: ‘Finally finished my quarantine craft’ 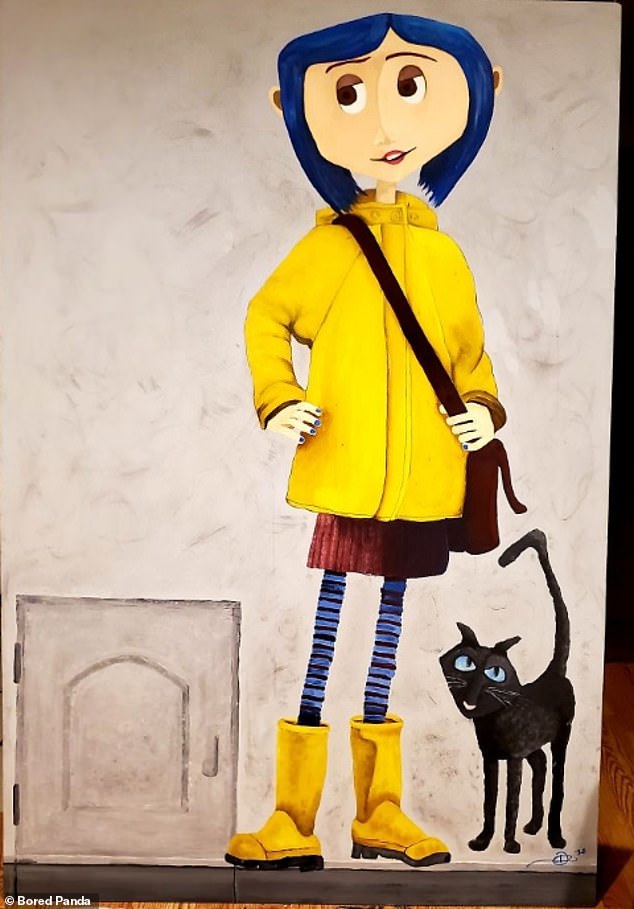 This user, from an unknown location, finally finished painting their Halloween display board despite being either six months late or six months early for the holiday. The painting features a 6ft tall painting of the character Coraline standing in yellow boots and wearing a yellow raincoat 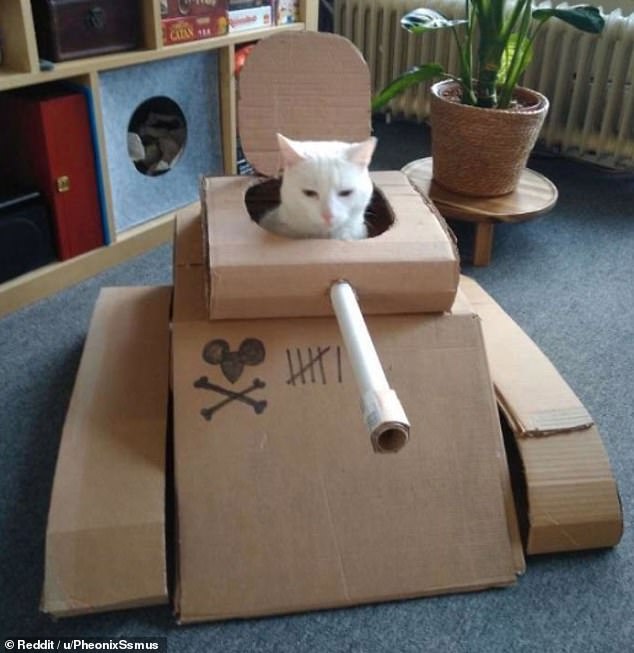 This user, from an unknown location, revealed he had spent an entire afternoon building this cardboard tank for his pet cat. The feline seems thrilled to be inside the machine, which features a joke tally chart of all the mice the puss has killed 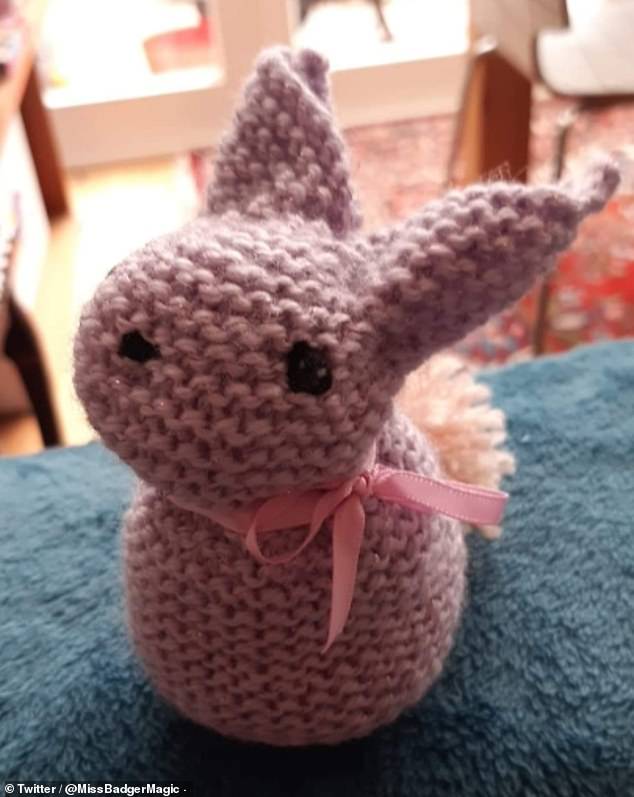 This Twitter user, from the UK, has taken to knitting to take her mind off the coronavirus pandemic. This is an example of one of her finished pieces – a rabbit, complete with a pale pink bow and fluffy tail