Brexit watchers on social media were baffled by Theresa May’s choice of the little-known Stephen Barclay to replace Dominic Raab in the Cabinet.

Twitter erupted with memes after Mr Barclay was named the new Brexit Secretary on Friday in the latest twist in a week of political drama at Westminster.

But in a reduction to his duties, it was revealed that Theresa May will in future take sole control of negotiations on EU withdrawal.

Mr Barclay’s job will be limited to the domestic delivery of EU withdrawal, preparations for Brexit either with or without a deal and shepherding legislation through Parliament. 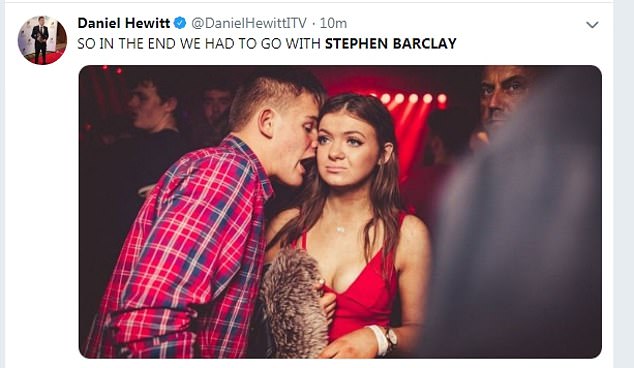 Brexit watchers on social media were baffled by the choice of the little-known Stephen Barclay to replace Dominic Raab in the Cabinet. One used an Alan Partridge GIF while another used the popular Scottish nightclub meme

Social media users reacted with surprise, with one sharing a GIF of Steve Coogan shrugging in a scene from Alan Partridge.

Another commenter used the Scottish nightclub meme of a male partygoer talking in a bored woman’s ear, explaining that the PM ‘had to go with Stephen Barclay’.

The new minister was also compared to Lenny from the Simpsons, sitting nervously in his new office unsure of what he should do.

A Leave supporter, Mr Barclay has catapulted to the Cabinet front rank in a role potentially crucial to Theresa May’s political survival.

The PM herself is expected to steer the remaining stages of the negotiations, along with top civil servant Olly Robbins.

The son of a trade union official father and a civil servant mother, the 42-year-old describes himself as coming from a ‘working class Northern background’ in Lancashire.

The youngest of three brothers, he came from the first generation of his family to go to university, reading history at Cambridge and spending a gap year serving in the Army with the Royal Regiment of Fusiliers.

After training as a lawyer, he worked as regulator for the Financial Services Authority and head of anti-money laundering at Barclays Bank before embarking on a political career. 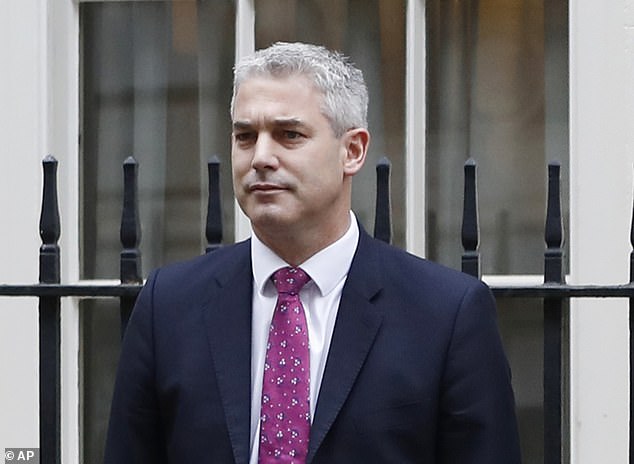 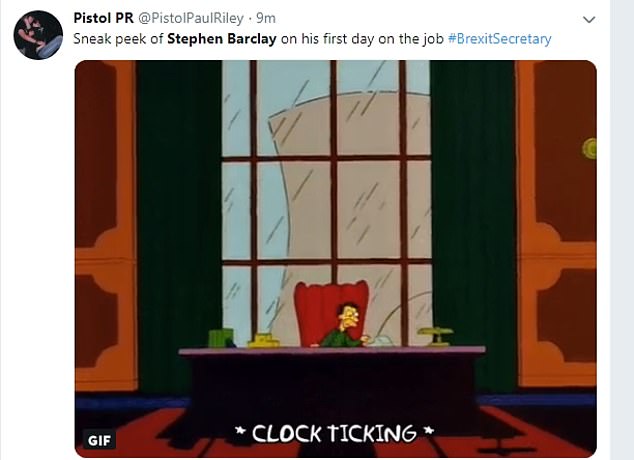 The new minister was also compared to Lenny from the Simpsons, sitting nervously in his new office unsure of what he should do 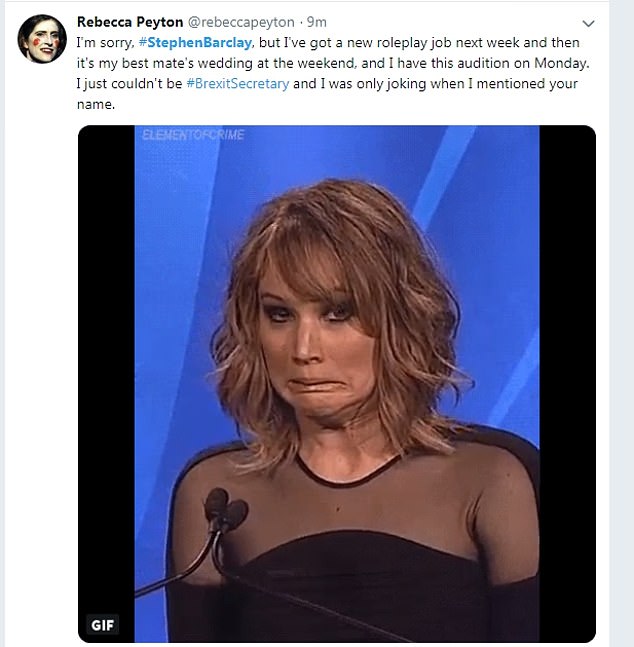 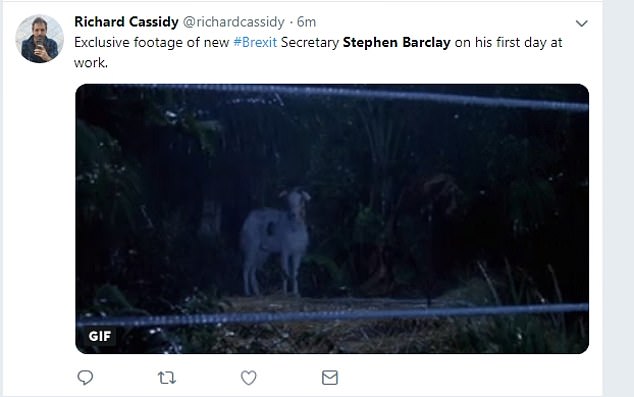 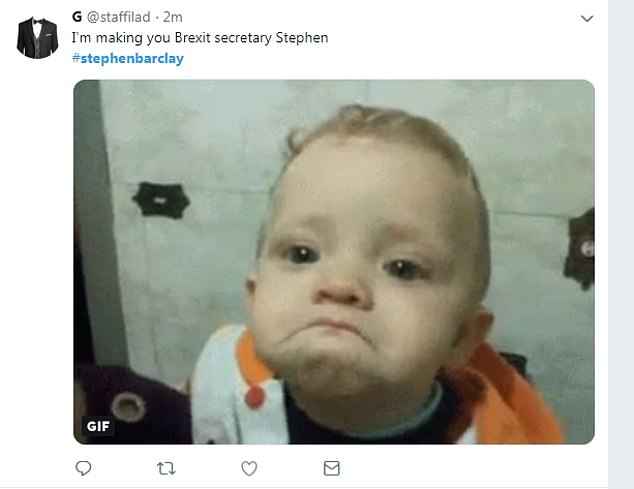 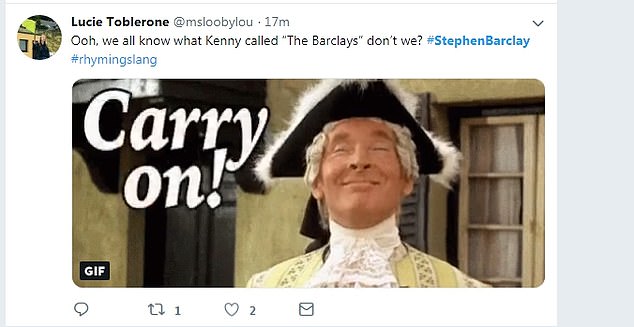 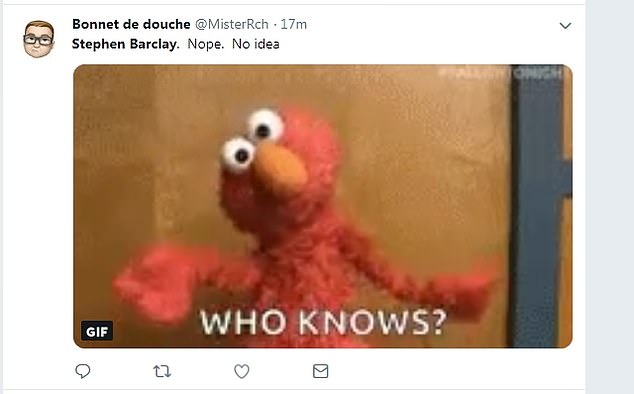 Picked for David Cameron’s ‘A-list’ of favoured candidates, he finally won the seat of North East Cambridgeshire in the 2010 general election having twice stood unsuccessfully parliament.

Despite his record as a government loyalist he had to wait until after the following election in 2015 before he made it to the ministerial ranks as a junior whip.

Instead he spent the coalition years building a reputation as a tough and effective interrogator of officials as a member of the Commons Public Accounts Committee.

During the EU referendum in 2016, he supported the official Vote Leave campaign, after ministers were given the freedom to campaign for either side.

Following the 2017 election he was finally promoted out of the whips office by Mrs May who made him her new City minister.

His financial background made him an obvious choice at a time when foreign competitors were looking to take advantage of Brexit to take away business from the Square Mile.

Nevertheless, he served only six months in the Treasury before he was promoted again to minister of state at the Department of Health and Social Care.