Who will stop my stalker? Calls to the National Stalking Helpline have doubled in a year

‘Unless there’s someone on the doorstep with a knife, it can look like the victim is being dramatic’

Calls to the National Stalking Helpline have doubled in a year, yet a record number of cases have been closed by police without being solved. Why such a sudden, shocking rise? Anna Moore investigates

Before lockdown, Sophie* was terrified of the school run. Every day, for more than a year, her ex-partner would drive slowly past as she walked her children, aged seven and ten, to school and again at home time. ‘He’d toot his horn and wave,’ she says. ‘It made me feel he had something up his sleeve.’

This was a man who had been violent and controlling throughout their six-year relationship, who had pinned Sophie to the bed when she was eight months pregnant, who told their eldest he would slit Mummy’s throat.

‘My legs would turn to jelly each time he passed,’ says Sophie, 37, an accountant from London. She has reported stalking incidents to the police six times, even having videoed him. ‘But when I went to the police, I was told, “He’s a plumber, he’s allowed to drive.”

I asked them to look at his work log to see if it gave him cause to drive to school each day but they said that was too much effort to justify the outcome.’

With lockdown, he switched to driving slowly past their house. ‘He texts, he calls and I’m noting it all down. But I’ve been asked by police, “What did he actually do?” It’s as if I have to get physically beaten for them to take notice.’

Sophie’s experience might help explain recent shocking Home Office figures which revealed that last year police in England and Wales closed 68,848 stalking and harassment cases before they were solved.

This is because cases can be closed when officers have assessed the risk as low, have spoken to both parties and decided not to take further action, or where the victim decided to withdraw their allegations (in many cases because they are too frightened to proceed any further). Each of these cases was marked as requiring no further action – even if, as in Sophie’s case, the perpetrator was continuing to harass the victim.

Experts routinely claim that the police’s approach to stalking is the same as where the attitude to domestic abuse was 30 years ago: minimised, dismissed and very poorly understood. But the number of stalking incidences is rising – calls to the National Stalking Helpline have doubled since this time last year.

The pandemic hasn’t helped. ‘Lockdown has created more distress and anxiety for victims,’ says Clare Elcombe Webber, helpline manager at the Suzy Lamplugh Trust, which says nearly 1.5 million people in England and Wales are victims of stalking every year.

‘Stalkers have had all the time in the world to engage in stalking behaviour, finding new ways to reach victims online. They know where their victims are 24/7.’

Though stalking only became an offence in its own right in 2012, it has no strict legal definition, covering a range of behaviours that are obsessive, unwanted and repetitive. ‘Policing a case of stalking is so much more complicated than policing a burglary,’ says Clare Elcombe Webber. ‘Stalking could be sending flowers and gifts. Unless you understand the pattern of behaviour, it might not look very serious.’

‘A lot of stalking is hidden – the menace is only experienced by the victim,’ adds Jane Monckton Smith, forensic criminologist and a specialist in homicide, coercive control and stalking. ‘At first, the victims might not know they are being stalked – they just have a feeling that something isn’t right. I remember one case – that ended in murder – where the woman noticed the garden furniture was being moved around, then a bit of criminal damage to her car. Victims might start to feel frightened and go to the police and say, “I’m not sure…” Unless there’s someone standing on the doorstep with a knife, it can look like the victim is being dramatic and police officers are very reluctant to name it as stalking.’

Former partners account for around 50 per cent of stalking cases. ‘If you’re controlling and your partner has the audacity to leave you, you don’t suddenly stop being controlling,’ explains Jane Monckton Smith. ‘Stalking is a continuation of that control, a campaign of power and punishment. It’s extremely dangerous – stalking behaviour features in 94 per cent of domestic homicides – but stalking by a former partner is taken the least seriously by police.’

The failure to act can have tragic consequences. In 2016, 19-year-old Shana Grice reported her ex-partner’s stalking behaviour five times. After an incident in March that involved an alleged assault by Michael Lane, 27, she was eventually fined £90 by police for failing to disclose that they had been in a relationship, making Shana reluctant to turn to them again. Three months later, Lane put a tracker device on Shana’s car and let himself into her flat with a stolen key while she pretended to sleep. He only received a Police Information Notice (PIN) – a caution issued in cases of harassment. On 25 August, Lane waited until Shana was home alone, let himself in again, then cut her throat and set fire to her room.

Also that year, 24-year-old Alice Ruggles was murdered by her stalker Trimaan Dhillon, again an ex-partner. Alice, too, had contacted police beforehand and had told friends that she felt ‘palmed off’. Days later, Dhillon killed her in what a judge described as ‘an act of utter barbarism’.

Most stalking cases do not end in murder, but they often destroy lives, says Rachel Horman, solicitor and chair of the stalking advocacy service Paladin. ‘It turns victims into nervous wrecks,’ she says. ‘It’s the grinding down – the first thing you think about in the morning and the last thing you think of at night.’

Alison*, 47, a former teacher who lives in the Northwest of England, can attest to that feeling. She met her stalker in 2018 at a neighbourhood meeting. He was an older, married man and they struck up a friendship. ‘At first, we always met with his wife and that lulled me into a false sense of security,’ she says. ‘We spent a lot of time together and I felt sorry for him.’

When the man told Alison, who is single and lives alone, that he had feelings for her, she told him there was no possibility of taking their relationship further. Then the stalking started. ‘At first it was a deluge of messages saying he loved me, but they became more abusive,’ she says. He’d turn up outside the door of her flat, having gained entry to her building by befriending a neighbour. He also followed her in his car.

‘The onus is on the victim to prove what is happening,’ says Alison, who gathered evidence and presented it to the police with the support of Paladin. According to Paladin’s Rachel Horman, stalking victims routinely put together dossiers of evidence, often spending thousands on lawyers and IT experts, ‘effectively investigating their own crime’ in order to be taken seriously.

As a result, Alison’s stalker was prosecuted – it was only in court last October that she discovered that he had a history of stalking and harassment. He was given an 84-day sentence, suspended for 18 months.

But this hasn’t changed his behaviour. Despite a restraining order, he recently followed her down the street shouting abuse. ‘I have it on film, but when I showed the police, they told me there was “insufficient evidence” to pursue it, which I’m now appealing,’ she says. ‘What is the point in a restraining order if a breach means nothing?

‘I feel so dismissed,’ she continues. ‘You’re constantly fighting to get some action taken and I feel as though he has burned down my life. I had to leave my job as it’s a demanding position which I just couldn’t keep up. I had to give up my flat because I could no longer afford the rent. I avoid the places I used to go to in case he’s there. I’ve thought about moving away, but what if he found me and carried on?’

There is hope on the horizon. Labour’s Yvette Cooper recently forwarded an amendment to the Domestic Abuse Bill to create a register of stalkers and domestic abusers. With this, a stalker’s repeat patterns would be far easier to identify – making police more likely to take action. This year also saw the introduction of Stalking Protection Orders (SPOs), which give police the power to immediately ban stalkers from contacting victims without having to wait for a criminal conviction.

For this to work, police need to understand and recognise stalking – then act on it. Early figures showed that 20 per cent of all the SPOs were generated by one police force: Sussex.

This can be traced back to Sussex Police and Crime Commissioner Katy Bourne, who has made it her mission to fund special training for every frontline officer and to create more than 100 police officers with extra knowledge to act as special points of contact for all stalking cases. She has also funded a local stalking service. And the reason Katy is so proactive is because she has also been a victim.

Her ordeal began in 2012 when, like many women in the public eye, she was trolled online. As it escalated, four men – none of whom knew one another – joined together online. There were blogs accusing her of being a prostitute, a paedophile and a Nazi. She was accused of having an affair with someone in her office.

A fake email account in her name was set up and damaging messages widely sent round looking as though they were from her. Then it moved to the physical world. At a small public meeting above a pub, one of the four stood at the back of the room, secretly filmed her and posted it online with his usual accusations. ‘When I saw that, I got the chills,’ she said. ‘I’d left that meeting and walked in the dark through a deserted car park. You think, “I’m sure he won’t physically hurt me… but will he?”’

A few weeks later, at a charity abseiling event, her stalker got there first and filmed her harness. The next day, he posted it online. Underneath one of the four wrote, ‘You should have slit her rope.’ ‘I tried to get a criminal conviction but the Crown Prosecution Service rejected it on the grounds of insufficient evidence. It was a huge blow – the stalking was relentless and I just wanted it to end,’ says Katy. Instead, she sought a civil injunction, at a total cost of around £20,000, which prevented her stalker from contacting or writing about her. She is currently fighting legal cases with all four men – and is determined to transform the police response in Sussex by encouraging victims to come forward. 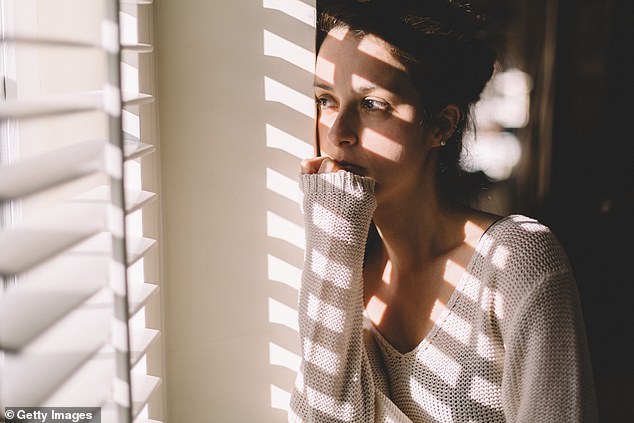 The results speak for themselves. Last year Sussex police saw an average 300 per cent increase in reports of stalking and three times as many cases were solved compared to the previous 12 months.

‘I know how victims feel and that’s partly why I’m so vocal about this,’ says Katy.

‘Do you remember the days when domestic abuse was seen as a private matter, as “just a domestic”? That’s where we are with stalking. It’s widely seen as a minor issue, a nuisance or bad behaviour. Actually, it can ruin lives. We can and should do better.’

If you think you’re a victim of stalking…

Talk to family, housemates, friends, neighbours and colleagues if you’re happy to – they can help keep you safe

*Some names have been changed. Photographs posed by models