Whoopi lashes out at Roseanne for retweeting doctored photo

Whoopi Goldberg had a strong message for Roseanne Barr on Wednesday, after the disgraced actress retweeted a doctored photo of her.

ABC cancelled Barr’s show on Tuesday after she wrote a racist tweet about former President Obama advisor Valerie Jarrett looking like a cross between the ‘muslim brotherhood & Planet of the Apes’.

While Barr initially apologized for her comments, she then started retweeting several supporters who believe she was singled out for being a Trump supporter. 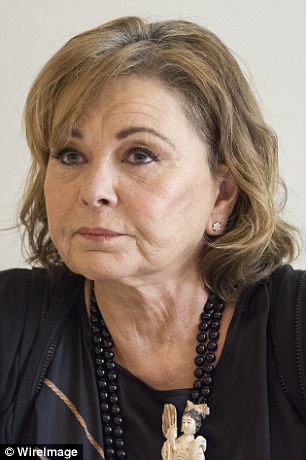 Whoopi Goldberg lashed out at Roseanne Barr (right) on Wednesday, for retweeting a doctored photo of her. Goldberg pictured on the left on The View on Wednesday

Among the many tweets that she reposted was a message from a user named Jamie who shared a photo of Goldberg wearing a shirt at the Women’s March, showing President Trump shooting himself in the head.

‘Out of curiosity @ABC & @Disney this is okay with you? Hypocrisy on the Left is sickening. Your pathetic! #BoycottABC #IStandWithRoseanne,’ Jamie wrote.

But the issue is – the photo was fake. 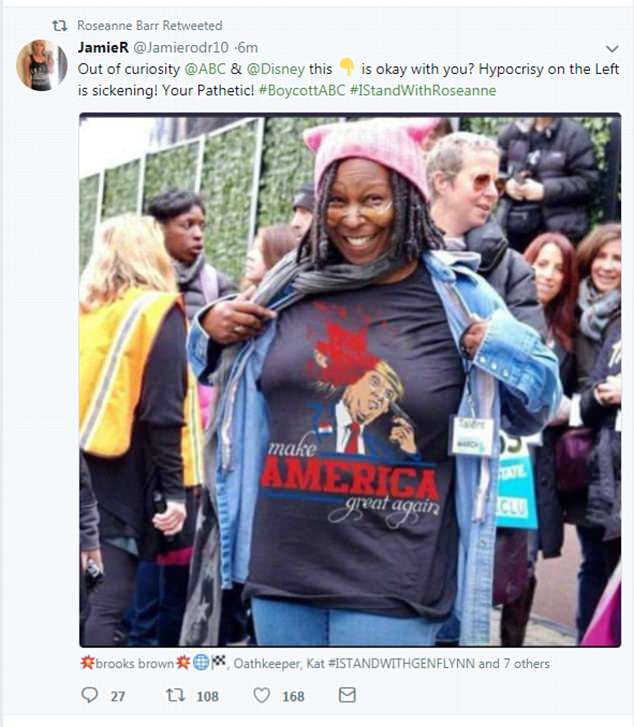 After her show was cancelled on Tuesday over a racist tweet, Roseanne started retweeting supporters’ messages claiming she was fired because she’s a Trump supporter. This supporter shared an image of Whoopi wearing a t-shirt showing Trump killing himself 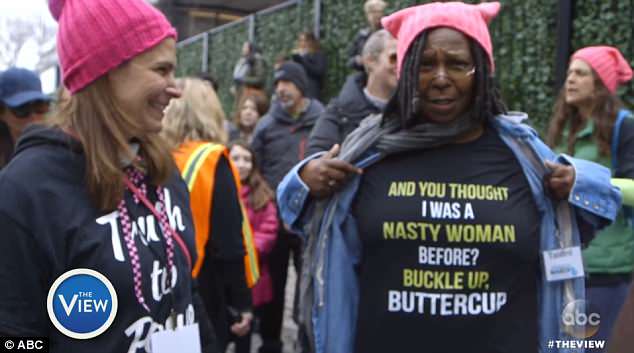 The photo ended up being doctored. This is the real t-shirt that Whoopi wore to the Women’s March in New York

On The View on Wednesday, Goldberg explained that ‘some bonehead photoshopped a horrific image on the shirt’. The shirt she actually wore had a much more PG-13 message on it, reading: ‘And you thought I was a nasty woman before? Buckle up, Buttercup’.

After explaining this, Goldberg said she had a message for Roseanne.

‘Just because you were caught with your pants down, don’t try to drag other people down with you. That’s it, don’t do that,’ she wrote.

Later, she added: ‘The bottom line is simple, I didn’t fake my shirt. Someone else faked my shirt. But that’s your tweet. That tweet came from you. So that’s yours, you did this to yourself.’

Barr appears to have deleted the tweet but has continued to retweet other messages from followers, defending her actions.

Among the many retweets are several messages criticizing Goldberg’s View co-host Joy Behar, for calling Christians who believe they can speak to Jesus ‘mentally ill’.