A family commitment will see Goodes, 42, miss the celebrations at the SCG before the Bloods take on the Gold Coast Suns.

However, Goodes – who won two flags as well as two Brownlow medals in a decorated career – is expected to front at team dinners on Friday and Saturday night with his former teammates. 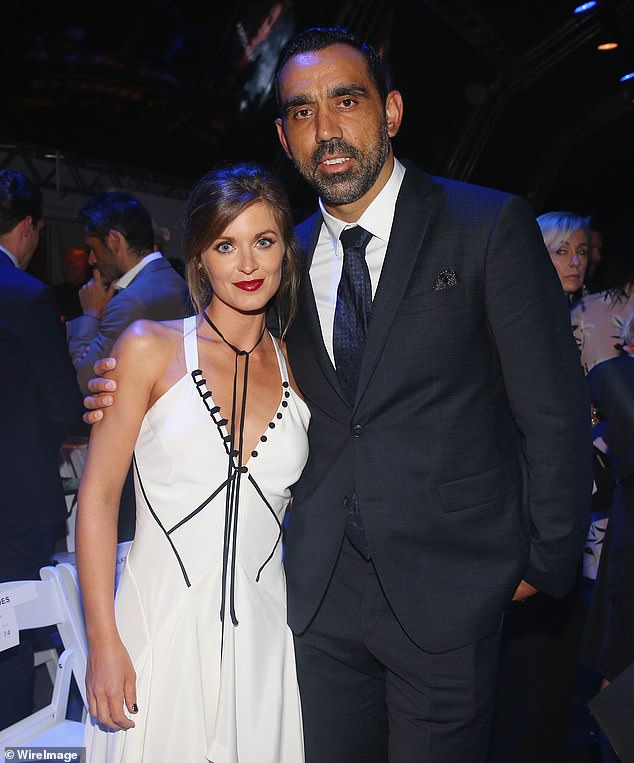 A family commitment will see Goodes, 42, miss the celebrations at the SCG (pictured, with partner Natalie Croker)

The champion Indigenous athlete retired in 2015, disillusioned with the sport after constant racially motivated booing from rival AFL fans following an incident with a young Collingwood supporter in 2013.

Goodes rejected an offer in 2015 to feature as part of a grand final motorcade for retired champions at the MCG and has also declined invitations to attend major AFL functions such as the Brownlow in recent years.

Additionally, Goodes snubbed an offer to be inducted into the AFL Hall of Fame, but has no issues with the Swans, who backed him during the shameful booing saga, which became a stain on the sport.

The foundation looks to empower the next generation of Indigenous role models.

Goodes and O’Loughlin co-chair the foundation, which focuses on the importance of education, employment and living a healthy lifestyle.

In recent years Goodes has turned his sporting attention to the world game, playing park soccer on weekends in Sydney’s east with Waverley Old Boys FC.

John Longmire’s Swans will look to bounce back on home soil after being beaten by the Brisbane Lions last start, with the Suns also coming up short versus Collingwood.