Why Andy Garcia prefers his family to Hollywood

Back in the late Seventies, when actor Andy Garcia was starting out, he earned a living as a waiter at LA’s Beverly Hilton hotel. One night he came in for a shift, ‘and they were holding the Golden Globe Awards’, he says. ‘I was waiting on Jon Voight, who won the Best Actor award for the movie Coming Home.’ Some three decades later, having long shed his waiterly garb, Garcia ended up casting Voight for his film about the legendary writer Ernest Hemingway. ‘You just never know,’ he admits, ‘where life is going to take you.’

In Garcia’s case, life has taken the 61-year-old actor, director and producer to some interesting places. Born in Cuba, he was two when Fidel Castro came to power, and following the revolution he and his family fled to America. After an eye-catching turn early in his career opposite Kevin Costner in the 1987 gangster flick The Untouchables, he followed it up with an Oscar-nominated performance opposite Al Pacino in The Godfather: Part III. Since then he has combined quirky passion projects (Modigliani, City Island) with high-budget fare (most memorably in George Clooney’s Ocean’s Eleven films) and is that rare thing: an A-list star who has managed to keep it real… or as real as you can do when you count Pacino and Jeff Bridges among your chums. ‘I’ve turned down parts where people have won Academy Awards,’ he says, ‘and most of the time I turned them down because I didn’t want to spend time away from the family.’

Garcia takes aim in The Godfather: Part III. Despite propelling him to fame, Garcia has kept a low-profile since his breakout role, preferring family to glamour and fame

All four of his children have featured in his films, and in his latest, Geostorm, he stars alongside his 29-year-old daughter, Daniella. Set in the near future when climate-controlling satellites suddenly start malfunctioning, scientist Jake Lawson (Gerard Butler) is sent into space to prevent a worldwide storm from erupting and destroying the entire planet. He soon discovers, however, that it isn’t simply a system malfunction but a deliberate one – the twist being that the US President, Andrew Palma (Garcia), is the only person in control of the kill codes to the satellites.

It’s a disaster thriller and an all too relevant one, given the recent rash of devastating hurricanes hitting large parts of America. ‘We’re going through a very tough period at the moment,’ says Garcia. ‘I grew up in South Florida and I lost a home to Hurricane Andrew [in 1992], so I’m very aware of what its power is. But it’s a home, not a life and there are a lot of people suffering right now.’ 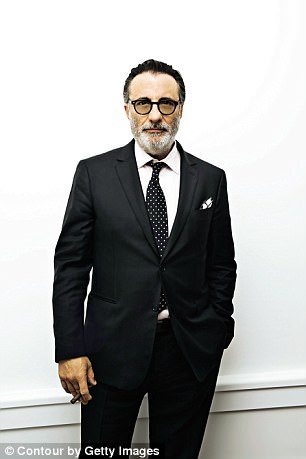 Actors frequently talk about their ‘journey’, but few have had one as interesting as Garcia’s. Young Andrés was just five when the CIA-backed Bay of Pigs invasion was launched on Cuba in 1961. ‘I remember hearing the gunfire at night and my parents telling me to get under the bed. The next morning we ran around looking for empty anti-aircraft shells.’ Shortly afterwards, Andy, his parents, two older siblings and their grandmother headed to Miami, where they lived in a motel near the beach. ‘The six of us were piled into one living room, one bedroom and a little kitchenette, but for me it was like an extended vacation.’

Garcia flourished at high school and was taught baseball by none other than a young Mickey Rourke. ‘Even then he had that avant-garde quality he has today. He was the only coach in bell-bottoms and sandals with a shag haircut.’

Garcia studied acting at Florida University, before pitching up in LA in 1978. His first role of note came in 1981 as a gang member in the hit TV series Hill Street Blues, and after playing a crazed drug runner in 8 Million Ways To Die (1986), Garcia landed the role of Vincent Mancini opposite Al Pacino in the 1990 film The Godfather: Part III. Vincent, as a protégé of Pacino’s Don Michael Corleone, manages to steal one scene by chewing off the ear of a rival.

It was a standout role and the film turned Garcia into a bona fide star. But he admits that the subsequent attention was, ‘sometimes overwhelming. The onslaught of fame is not something you’re really prepared for, so my reaction to it was to step away from it and keep a low profile’.

He makes no secret of the fact that family is his main priority. He and his wife Marivi have been married for 35 years and, compared to the often freewheeling exploits of kids raised in Hollywood, Garcia appears to have run a pretty tight ship at home with his children – his daughter Dominik once remarking that she had to inform her dad she was staying over at her boyfriend’s house rather than at a hotel (she was 23 at the time).

At times, with his old-school politeness, he seems of a different era, and despite his charcoally voice and dark good looks, has never appeared comfortable playing up his inherent sex-symbol status, famously walking out of an audition when asked to remove his shirt. Not that he didn’t have fun playing a novelist-turned-male escort in the 2001 film The Man From Elysian Fields opposite Mick Jagger as head of the agency. ‘I gave him a present of a pair of bongos and I wrote on them: “Squeeze them between your knees and spank them.” ’ 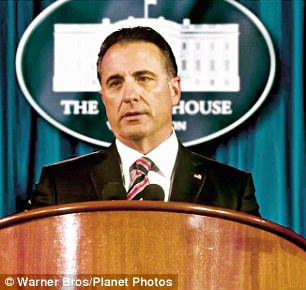 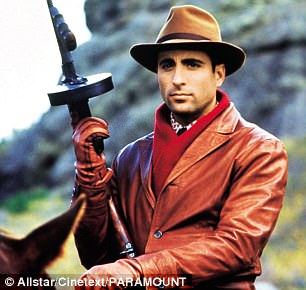 Garcia in Geostorm (left); in The Untouchables (right)

Talking of spanking, next year will see Garcia star in the movie Book Club opposite Jane Fonda, which centres on four friends whose lives are changed when they read Fifty Shades Of Grey. And despite his occasional passion projects about Cuba, including his 2005 film The Lost City, Garcia has never returned to his homeland. ‘I won’t go back while that regime is in power,’ he says.

‘But I still remember my childhood – the smell of my father’s farm and the coastline,’ he says, before adding: ‘It’s been a long journey to get here.’

‘Geostorm’ is released on October 20