The suburbs in Melbourne and Sydney with the lowest vaccination rates may not be lagging as far behind as it may seem.

Inner-city suburbs such as Chippendale, Ultimo and Kingsford in Sydney and North Melbourne, Southbank and Carlton in Melbourne are among the least vaccinated in Australia’s two most populous states.

In some inner suburbs, the double dose rate is under 30 per cent, far below the state averages of 73.5 per cent in NSW and 58.6 per cent in Victoria.

Inner-city suburbs such as Chippendale, Ultimo and Kingsford in Sydney are among the least vaccinated. This map shows the less vaccinated suburbs in light blue

But the rate may seem lower in inner-city suburbs because they typically include transient populations, including thousands of international students and backpackers who are locked out of the country.

Due to pandemic border closures, Australian universities enrolled 210,000 fewer international students in 2021 than in a typical year, according to market research.

In January only 360 international students arrived in Australia, compared to 91,250 in the same month last year.

Both NSW and Victoria use the Australian Bureau of Statistics’ Estimated Resident Population from 2019 to determine what percentage of an area has been vaccinated.

This means any population decrease during the pandemic is not accounted for in the figures, making it seem like the vaccination percentage is lower than it really is.

‘International students and workers have left, housing prices have got too expensive for many, others have done a sea/tree change,’ he said. 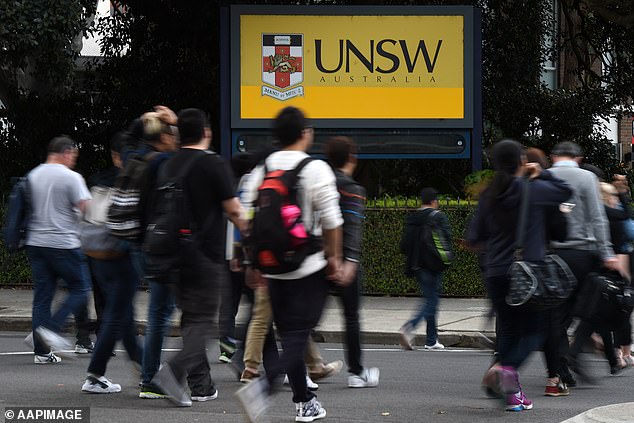 Due to pandemic border closures, Australian universities enrolled 210,000 fewer international students in 2021 than in a typical year, according to market research

Melbourne lord mayor Sally Capp has also said the data is skewed because there are far fewer international students in the CBD compared to 2019.

‘That certainly is a factor,’ she told Daily Mail Australia.

But the professor said other factors affecting these areas – which have a younger average age than regional areas or outer suburbs – include hesitancy and insecure work.

‘If people don’t get paid time off work, they are worried they might get sick after having the vaccine and lose some of the precious little time they have with their kids if you have a jab that might lay you out for two days,’ she said.

‘These are areas where you’ve got people doing multiple jobs and casual work.

‘Then there’s also information access, trust of government, people confused by the disinformation that’s out there.’ 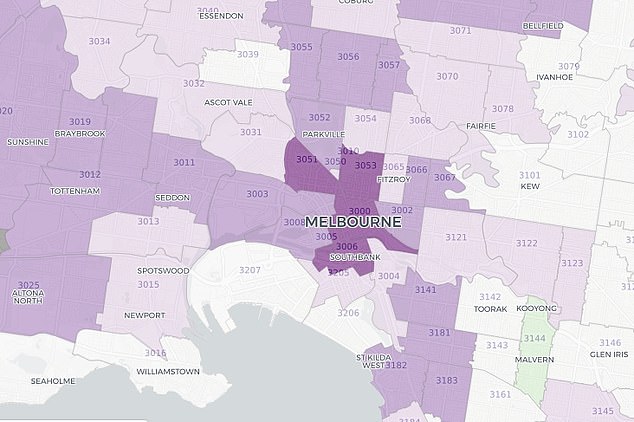 The suburbs of North Melbourne, Southbank and Carlton all have double dose levels of less than 30 per cent. The suburbs in dark are the least vaccinated

Professor Bennett said inner-city areas can be the hardest to vaccinate because they are some of the most diverse in Australia.

‘I think it’s almost a mistake when you look at some of these complex, high density areas to think about them as a community. It’s multiple communities, such as the Aboriginal community.

‘You have high density living, complexity in the community and different motivators and barriers across the community,’ she said.

‘It can take longer to work with the various parts of the community to get things working well.’

How are Sydney suburbs tracking?

In Sydney, western and inner city suburbs are trailing behind in vaccination rates, and in some areas with less than half of eligible residents have had both jabs.

Chippendale follows close behind with less than 60 per cent of adults on their first dose and less than 40 per cent on their second.

Many neighbouring suburbs, including Redfern, Surry Hills, Ultimo and Waterloo have full vaccination rates of less than 60 percent.

The low figures are overshadowed by the eastern suburbs where single dose rates are just below 90 per cent and double dose is almost 70 per cent. 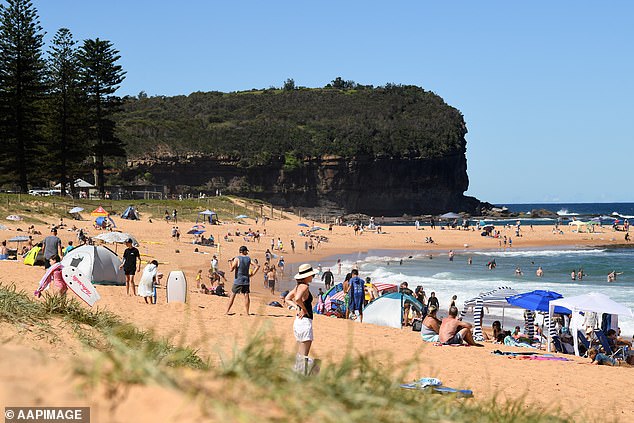 The vaccination uptake is high in the northern suburbs with more than 90 per cent of residents on their first dose and less than 80 per cent on their second (pictured, beachgoers at Mona Vale)

Coogee, Maroubra and Randwick are among the suburbs with higher intake.

The vaccination uptake increases drastically in the northern suburbs with more than 90 per cent of residents on their first dose and less than 80 per cent on their second.

Vaucluse, Mosman and Rose Bay are among the suburbs that sit ahead of the pack.

University of Sydney Professor Julie Leask said suburbs with lower vaccination rates would be more vulnerable when the state began to reopen.

‘If the 30 per cent of people in NSW who aren’t fully vaccinated were evenly spread across NSW then each of those people would be more cocooned by the immunity of those around them,’ she said.

‘Unfortunately, there are clusters in particular communities which makes them more vulnerable.’

NSW currently sits at 90.14 per cent first dose after the state smashed the 90 per cent milestone on Saturday.

How are Melbourne suburbs doing?

Slow vaccination rates have been recorded elsewhere in the country and include much of inner city Melbourne.

The suburbs of North Melbourne, Southbank and Carlton all have double dose levels of less than 30 per cent.

They city’s south-east and northern suburbs are also slow on the uptake with less than 40 per cent of residents double-jabbed. 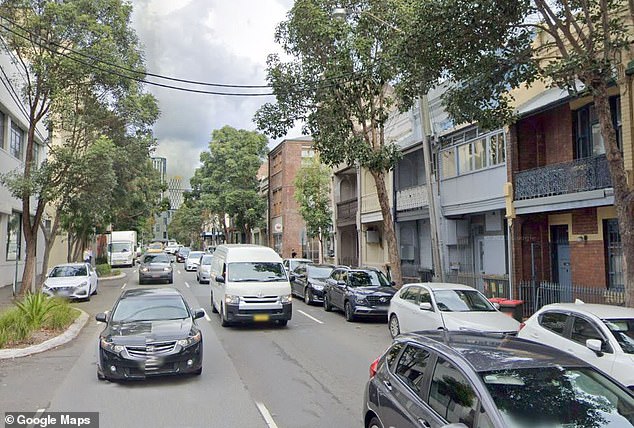 Broadmeadows, Dallas, Jacana, Oaklands Junction, Yuroke and Bulla are the some of the northern suburbs with poor uptake.

Vaccine uptake increases dramatically in the inner and north-east suburbs with nearly 70 per cent of residents fully vaccinated.

Regional Victoria has some of the highest rates of vaccination. Trentham and Charlton have more than 70 per cent of residents double-jabbed.

Kullawil, in north-west Victoria, has more than 80 per cent.

Covid-19 commander Jeroen Weimar has provided the latest vaccination tracking to the state government with the figures revealing the state will hit its 70 and 80 per cent vaccination milestones early.

Victoria was expected to hit the 70 per cent double jab rate by October 26. It is now expected to meet the milestone on October 23.

The 80 per cent milestone was forecast to be met on November 5. The date has been cut by two days to November 3.