Why are mesh victims still being betrayed two years after excoriating official inquiry?

Two years ago, it seemed that thousands of British women afflicted with crippling pain, ruined sex lives, shattered relationships and wrecked careers would finally get justice and practical redress.

A government-commissioned report, following a campaign backed by Good Health, recognised that the plastic mesh tape surgeons had used to treat their incontinence and prolapse had caused some women catastrophic harm.

The net-like polypropylene mesh is inserted into the vaginal wall to act as a scaffold to support organs such as the bladder.

However, within months of the mesh — known as transvaginal tape (TVT) — being introduced, some patients started to complain of crippling pain, sexual dysfunction and injury, the material becoming brittle and shearing into the tissue. They found their plight ignored, their agonies dismissed as imaginary.

How many women’s lives have been ruined by this mesh is unknown, but Baroness Cumberlege, who led the official review, estimated it to be ‘tens of thousands’.

Even at the height of publicity about the potential risks — and just before the pause on the operation was imposed — Kelly Cook, 37, a counsellor from Brigg in Lincolnshire, was advised to have the procedure

But polypropylene mesh is not just used for incontinence and prolapse in women.

The same type of mesh is also used for hernia operations and to support abdominal areas where women have had tissue removed to reconstruct their breasts after mastectomies.

The use of the mesh for stress urinary incontinence was paused in July 2018 as recommended by the inquiry’s preliminary report — then the concluding report, in July 2020, said that this pause should continue until strict requirements on safety and recompense are met.

These include the establishment of specialist centres to remove mesh from afflicted women, and financial compensation from government and mesh manufacturers for women affected, as well as the setting up of a database of victims to ascertain the numbers involved and their injuries.

The final report also urged that the watchdog, the Medicines and Healthcare products Regulatory Agency (MHRA), which had approved the use of mesh tape in the 1990s, should be reformed to improve its vigilance on such problems.

Matt Hancock, then Health Secretary, apologised for the women’s pain. ‘We are going to look carefully at the recommendations,’ he told reporters in July 2020. ‘We need to take action.’

But words can be cheap: a Good Health investigation has found none of the recommendations has been implemented properly and the use of mesh in women is continuing. 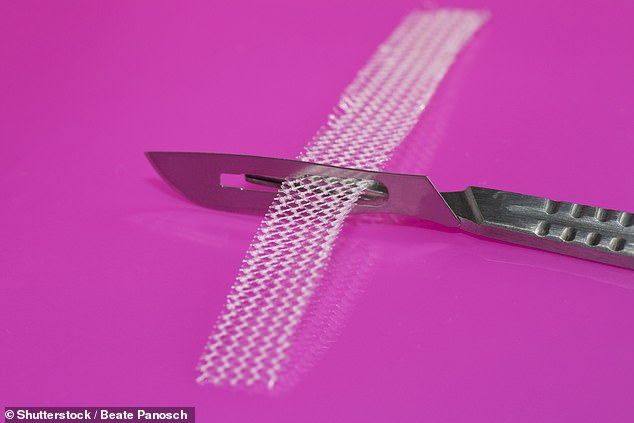 A government-commissioned report, following a campaign backed by Good Health, recognised that the plastic mesh tape surgeons had used to treat their incontinence and prolapse had caused some women catastrophic harm. A file photo is used above

Even at the height of publicity about the potential risks — and just before the pause on the operation was imposed — Kelly Cook, 37, a counsellor from Brigg in Lincolnshire, was advised to have the procedure.

After the birth of her third child eight years ago, Kelly began suffering with urinary incontinence.

‘At its worst I couldn’t even go out as I would leak,’ she says.

In March 2018, Kelly, then aged 34, underwent TVT surgery for a prolapse. ‘The only thing they offered was to insert a mesh sling to support my bladder,’ says Kelly.

‘Straight after the op things didn’t feel right,’ she says. ‘I could feel the mesh inside me and it was causing pain.’

She adds: ‘I have a cutting sensation, like my urethra [the tube urine passes through] is sitting on a cheesewire — even now, four years later.

‘When I told the surgeon about my pains some weeks after the op, he said everything was OK.’

Not long after that, in July 2018, Kelly saw news reports about the newly commissioned Cumberlege inquiry. These prompted her to seek support from campaign group Sling The Mesh and to go back to her doctors. 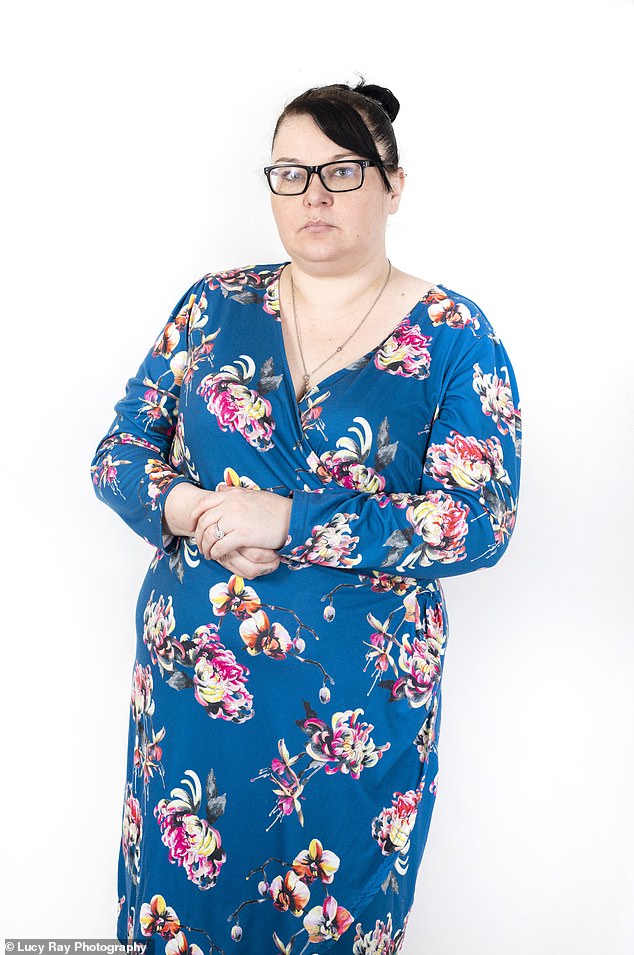 In March 2018, Kelly, then aged 34, underwent TVT surgery for a prolapse. ‘The only thing they offered was to insert a mesh sling to support my bladder,’ says Kelly

After three years of ‘serially complaining’, Kelly was finally referred for investigations, only to be told that the surgeon wouldn’t take the mesh out ‘because he can’t’.

The pain is putting an impossible burden on Kelly. She and her partner have six children between them and she is also taking a degree in counselling.

‘It has changed my whole life,’ she says. ‘My nerve problems make my hips feel as though they aren’t straight. I am still incontinent and the pain means I can’t stand or sit for long.’

Kelly is now being referred to a specialist in Sheffield, with this consultation hopefully preparatory to having the mesh removed at a specialist clinic.

‘But I’m told it could be two years before I’m actually seen at Sheffield, the waiting list is that long,’ she says.

In 2020, the Cumberlege review recommended that mesh should not be used again until specialist centres were properly established to deal with complications and its removal. There are now eight in England and one in Scotland.

However, Alec Shelbrooke, MP, co-chair of the Surgical Mesh All-Party Parliamentary Group (APPG), told MPs in a debate in February that specialist centres for these women are not working and warned: ‘Many patients are denied access and are offered physio and pain management instead.’

The APPG co-chair, Emma Hardy, MP, told Good Health that when women do get a specialist removal-centre consultation, they are ‘sent to centres that have the same surgeons who put their mesh in.

‘This is causing extreme upset, not least because the women often feel their complaints were rejected by these very surgeons in the first place,’ she says.

‘It is assumed these surgeons are working on mesh removal because there is a shortage of qualified people in this area.

‘The removal procedure is extremely difficult because the mesh is designed to have the patient’s tissues grow in, through and around it. The procedure has been described as like trying to remove hair from chewing gum.’

As a result, women often don’t get the mesh removed fully, she adds. ‘We have heard from women who’ve been told the mesh has been completely removed, only to discover there are substantial amounts left. I don’t think it’s possible to take it all out, but we need a definition of what proper removal should actually mean.’

Thus in March, a paper in the New England Journal of Medicine was published claiming positive results for a trial of two different methods of inserting the mesh at 21 UK hospitals on more than 500 women. The trial compared a standard mesh-insertion method which had been put on hold by the Cumberlege inquiry, with a new, less invasive method.

In an accompanying editorial, the journal concluded: ‘This trial provides evidence that mesh surgeries for stress urinary incontinence are safe and effective — data that is important both for restoring confidence in such surgeries and potentially for increasing their availability.’

Kath Sansom, who leads Sling The Mesh and was herself injured by TVT (inserted for incontinence in 2014), is alarmed by the new paper. ‘Any busy doctor just skimming the research’s reported outcomes would miss the study’s data on pain,’ she told Good Health.

‘The results actually show that more than 14 per cent of the patients were suffering from groin or thigh pain after three years, regardless of which type of mesh op they had. But the research report and accompanying editorial both ignored this blight on one in six women’s lives.’

The study’s corresponding author, Mohamed Abdel-Fattah, a professor of gynaecology at Aberdeen University, told Good Health that his study ‘should help women make informed decisions on their treatment, clinicians to provide evidence-based counselling for women requiring this type of surgery, and policymakers to make evidence-based decisions on the type of procedures to be offered’.

Swati Jha, a consultant urogynaecologist and spokeswoman for the Royal College of Obstetricians and Gynaecologists, told Good Health the pause on vaginal mesh tape should be lifted.

‘There are some women in whom mesh would be the only viable option, yet they are left incontinent as mesh is still not being offered,’ she says. ‘Currently, the UK is the only country where TVT is not available as a routine option.’

The MHRA told Good Health that despite the pause, some NHS non-research operations have also still gone ahead.

A spokeswoman said: ‘Certain exceptions were needed within the pause, as in some cases this type of mesh may be the only treatment option that is right for a woman.’

Meanwhile, polypropylene mesh is still on the march beyond incontinence surgery. After Linda Williams, 54, a mother of two from Redcar in Cleveland, was diagnosed with aggressive cancer in her right breast in 2015, she had a mastectomy, followed by six months of chemotherapy and radiotherapy for a year.

Linda took two years to recover, and then accepted the offer of breast reconstruction as she ‘wanted to go back to being able to sit on the beach with confidence’.

She underwent a transverse rectus abdominus muscle flap, where muscle, fat and skin are taken from the stomach area to create a new breast. After removing the muscle, the surgeon may put in mesh to strengthen the stomach wall.

‘Immediately afterwards I started to have issues,’ she says. ‘I had a stabbing pressure in my left leg, perhaps from nerve damage. I couldn’t walk properly or put any significant pressure on the leg. My GP sent me for a scan and it showed the mesh inside my body.

‘That’s the first time I knew I’d even been given mesh. I was then told by the surgeons that there was nothing wrong with the mesh, that I was the only person who had ever complained.’

When Linda subsequently saw a Panorama investigation into vaginal mesh injuries in 2017, she says: ‘I didn’t feel so crazy’.

In 2018, she developed cancer in her left breast and had a second mastectomy and didn’t have ‘the strength to keep fighting’ about the mesh. ‘Surgeons now tell me they cannot remove it because if they did it would leave me at serious risk of hernias,’ she says. ‘I’ve beaten cancer twice but mesh has ruined my life.’

How many women are injured by non-vaginal mesh use is ‘a complete unknown because no one is studying it,’ says Kath Samson. ‘There’s no awareness, so surgeons can get away with claiming that there’s no problem.’

Meanwhile, the Cumberlege inquiry’s recommendations remain unmet in crucial areas, including financial redress. Emma Hardy says the Government is blocking progress: ‘We’ve repeatedly written about this to the Health Secretary, the last time on March 23, but so far we have received no reply. We’re not giving up or going away.’