Why are they holding NYC hostage? Mid-Hudson and Long Island will open next week

New York City remains closed and will do until at least June, per the mayor, despite Long Island and mid-Hudson, the two regions surrounding it, reopening next week.

Neither mid-Hudson nor Long Island has met the requirement of a 14-day decline in coronavirus deaths yet, but on Friday, Gov. Cuomo said he expected both regions would by next week which will allow them to open.

New York City met that target, and others, weeks ago but it has to stay closed until June at least, according to the mayor, for increasingly inexplicable reasons.

The city is just two percent off ICU target and three percent off its hospital bed capacity.

There are 21,000 beds across New York City’s hospital beds.

Three percent, the amount needed, is 630 – slightly more than half of what the USNS Comfort provided before it left the city at the end of April after treating only a few dozen patients.

As for the number of ICU beds that are still needed, the city will not give a precise number of how many beds there are currently in the system and how many are needed. 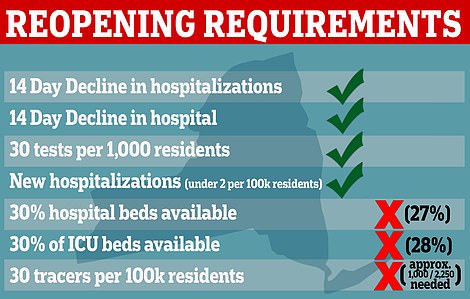 To complicate matters further, Mayor de Blasio said on Friday that the city had come with its own new threshold of keeping the total number of people in ICU beds beneath 375.

At present, there are 471 people in the ICU beds.

The Mayor said on Friday: ‘We are down more than 100 patients in the past 10 days and we’re confident that this number will continue to decline.’

The number only applies to the ICU beds across the city’s public healthcare system.

A spokeswoman for the Mayor’s office told DailyMail.com: ‘We feel that the number of people in the H+H ICUs, given the strain they were in under COVID, is an accurate arbiter of our progress against the virus and the extent of its spread across the city.’ 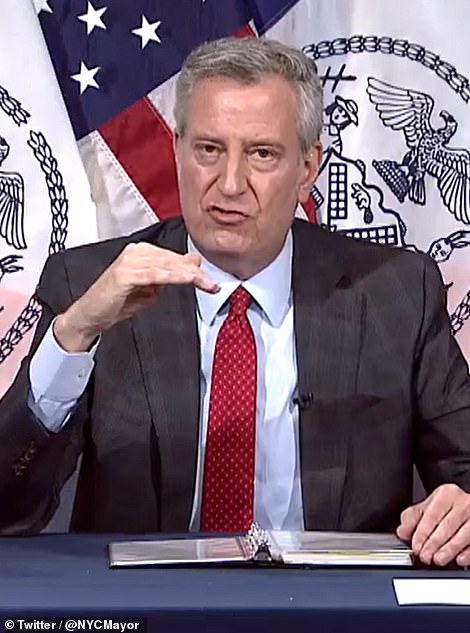 It’s unclear who will have final say on the reopening.

The Mayor’s office says that the state is on the same page but the 375 ICU bed number has never been mentioned by the governor’s office.

Cuomo said on Friday: ‘No local official can open or close,’ echoing the power struggle the pair showcased at the start of the pandemic when de Blasio was calling for a shutdown before Cuomo wanted to order one.

The only other area where it falls short is the lack of contact tracers the city has hired.

City and state officials have refused to give an explanation for why it can’t open without the tracers or how many have actually been hired on a daily basis when asked by DailyMail.com.

They also won’t answer why the city can’t add more hospital beds to its existing capacity – as was done at the height of the pandemic – in order to reopen the bleeding economy.

In the meantime, businesses are crying out to be allowed to reopen. A coalition of 300 have formed, calling themselves Reopen NY.

They say they have been brought ‘to their knees’ by the lockdown and that it is ‘dragging on’. 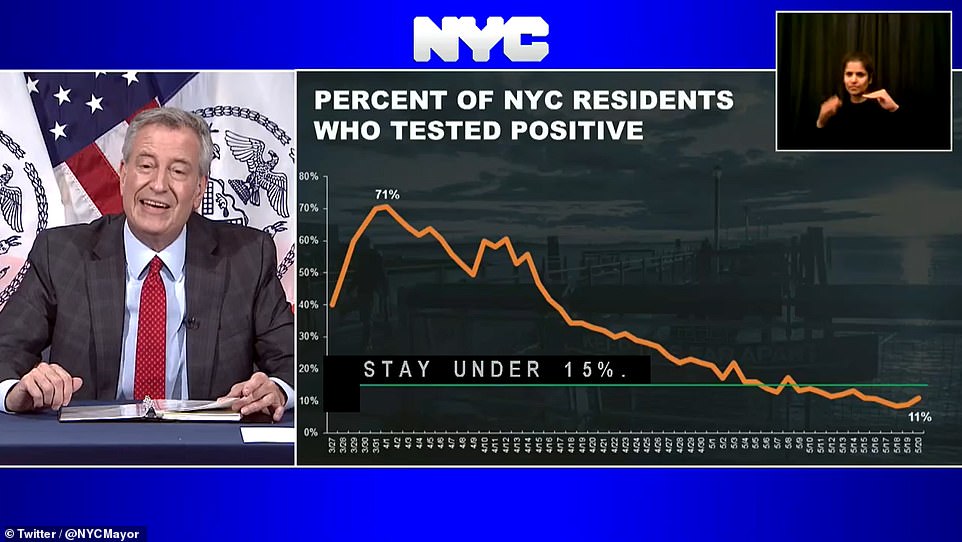 De Blasio unveiled the new threshold system which requires the city to sit below the following thresholds in order to reopen: new hospital admissions is 200, for ICU patients is 375 and for new cases is 15 percent 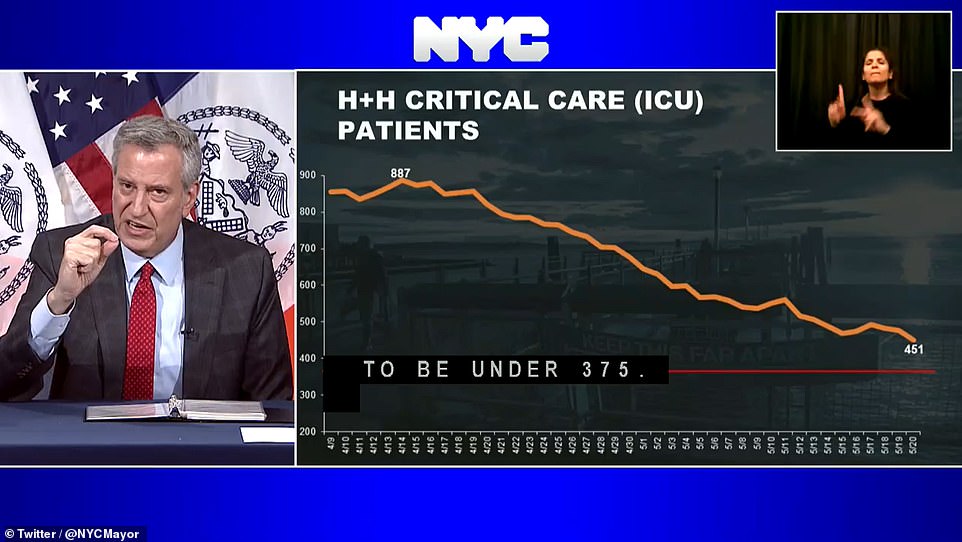 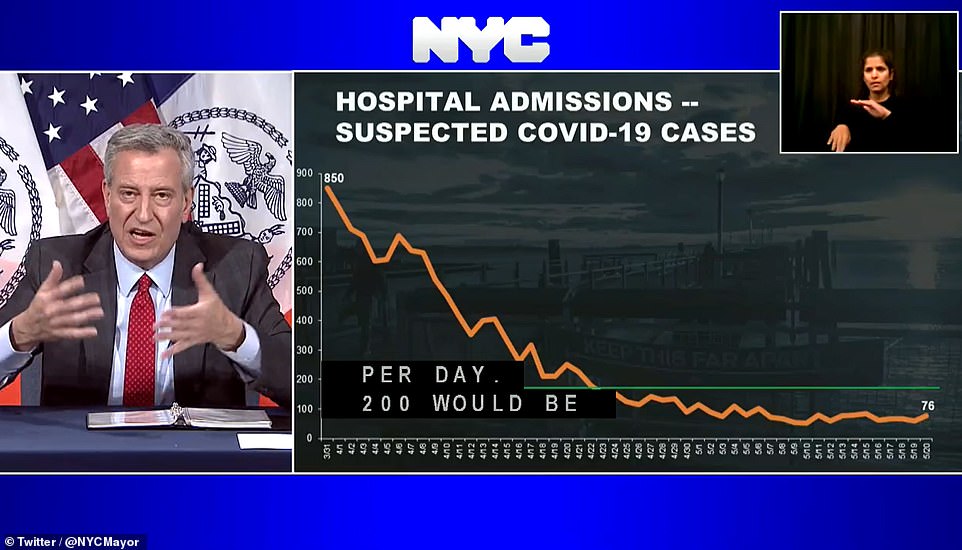 Landlords are bleeding income, with as many as 80 percent of one major landlord’s retail tenants failing to make rent payments in April and May.

One major commercial landlord said 80 percent of their retail tenants missed rent payments in April and May and others are reporting that even companies that have healthy finances are simply choosing not to meet their lease agreements, amid growing uncertainty over how many businesses will actually work in offices in the future.

Residents are also abandoning their expensive apartments by breaking their leases or failing to renew them to wait out the crisis in more comfortable surroundings. For the rich, that means spacious homes in the Hamptons and upstate and for the young, it is their parents’ suburban homes. 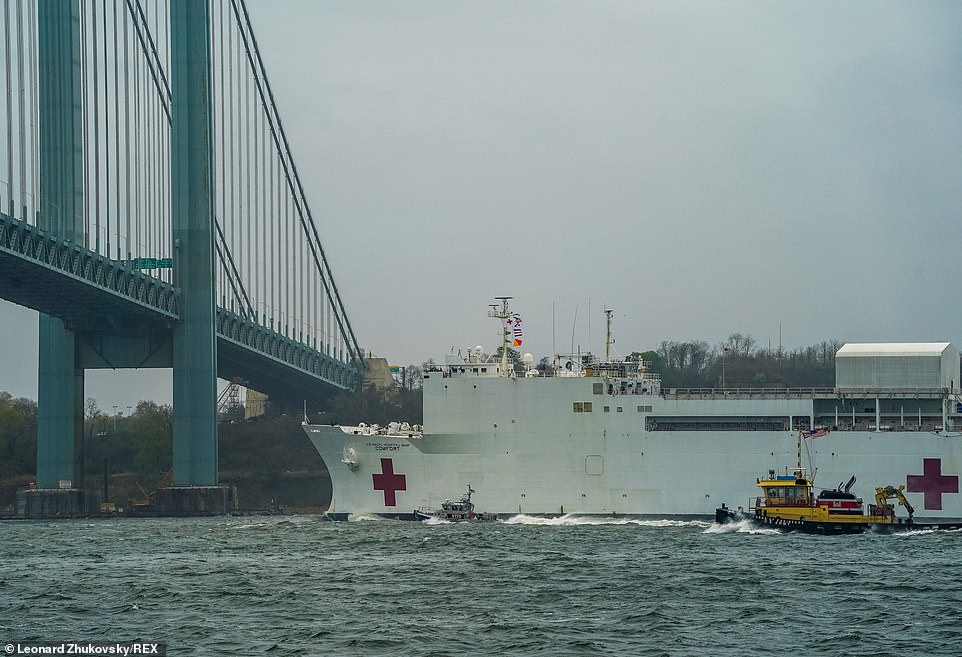 The USNS Comfort leaves New York City on April 30. It had 1,000 beds – nearly double what officials say is now needed to reopen the city – but there has been no suggestion of it returning nor has there been talk of the system adding more beds to get people back to work 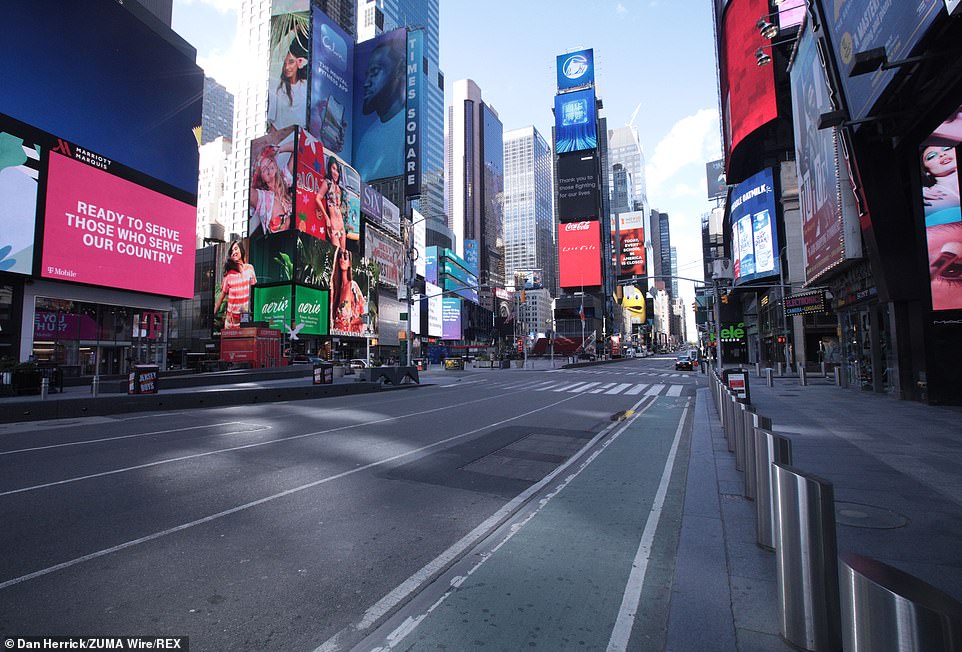 The knock-on effect is an ‘alarming’ drastic reduction in the number of landlords who will be able to pay their tax bills on July 1 which will result in devastating losses in tax revenue for the city and, in turn, the state.

In April, NYC and the state collected just $78.5million in tax revenue on the sale of commercial and residential properties, down from $217.5million in March.

Tax revenues pay for the city’s essential services like road repairs, sewage systems, police and fire fighters.  Those will take a hit if the situation continues.

‘This dramatic loss in tax revenue is alarming. The real estate sector is the city’s economic engine.