Why are young women risking permanent damage with ‘fox-eye facelifts’?

It is billed as a pain-free ‘tweakment’ – a minor cosmetic procedure that will leave you with a sultry and sexy new look, worthy of a supermodel, in as little as 20 minutes.

Called the fox-eye threadlift, clinics advertise the procedure on social-media sites with videos of patients before and after, with the corner of their eyes swept up and back in dramatic fashion.

The looks of American A-list models Bella Hadid and Kim Kardashian’s sister Kendall Jenner are often cited as an inspiration, and in the UK, models Katie Price and Danielle Lloyd have admitted having the treatment.

Cosmetic doctors say there has been a surge in enquiries about the fox-eye threadlift in the past 12 months – but not everyone is a fan. The look is undeniably extreme, and the women who share pictures of their results online are often ridiculed and likened to aliens.

One, cuttingly, suggests they end up looking like Mr Spock from Star Trek.

The procedure involves plastic surgical threads, like those used to stitch wounds but covered in tiny barbs, being inserted beneath the skin beside the eyes and pulled tight.

And experts say it is not as straightforward or risk-free as it’s often described.

At best, the fox-eye threadlift offers temporary results that disappear in weeks. At worst, patients may be left in pain, with lopsided faces, puckering and dips in the skin and permanent scarring.

Even more disturbing, The Mail on Sunday has uncovered practitioners on social media using the method on other parts of the body, such as the breasts and buttocks, to perform breast and bum lifts ‘without going under the knife’ and at a fraction of the price – a practice that doctors fear could cause potentially fatal complications.

The fox-eye threadlift procedure, which costs between £350 and £500, involves injections of local anaesthetic around the temples before a cannula – a thin, blunt-ended hollow tube – is pushed beneath the skin. 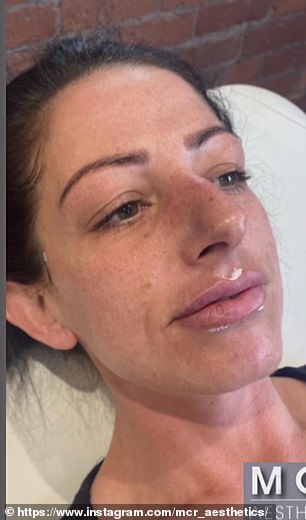 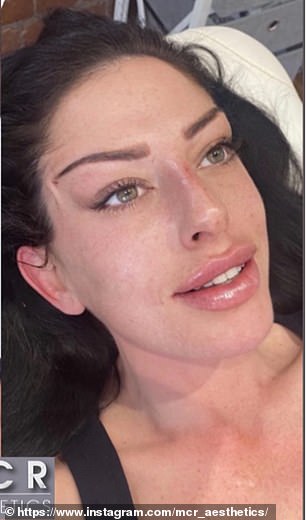 A thread is inserted into the cannula and teased upwards using a needle and careful hand movements. On the bottom of the thread are tiny, corrugated discs which attach to the tissue in the face and allow the skin to be dragged upwards and secured in place.

A finger is then placed on the very tip of the thread to ensure it stays tight while the cannula is withdrawn.

As the procedure involves a single needle puncture, which heals on its own, it is not technically considered surgery.

Patient safety campaign group the Joint Council For Cosmetic Practitioners has told The Mail on Sunday of cases where it is performed in beauty salons and even in people’s living rooms.

Yet Mr Nigel Mercer, a plastic surgeon in Bristol and a former chairman of the British Association of Plastic Reconstructive and Aesthetic Surgery, says: ‘It is a common misconception that threadlifts are straightforward.

‘In fact, the risks and complications are just as serious as with surgery – including serious infection, bruising, and swelling. The single nerve that controls movement in the forehead sits just above the brow. It is very easy to damage that with a thread or a needle. And if that happens, you’ll end up permanently looking like you’ve had a stroke.’

Women unhappy with their fox-eye threadlifts complain of permanent scarring after doctors had to fish dislodged threads out with a cut on the face. Others have had to visit A&E after contracting a serious infection that required infusions of antibiotics.

‘The fox-eye lift carries a very high risk of damaging the many important nerves and blood vessels in the area under the skin when inserting the threads,’ warns Dr Jinah Yoo, a consultant dermatologist at University Hospitals Birmingham. ‘You can end up with a big bleed under the skin or facial paralysis. There’s also the risk of infection.

‘Although there are lots of little hooks on the thread that are designed to keep it in place, one often gets dislodged so you can end up with lopsided eyebrows.

‘And if the thread is inserted too close to the surface of the skin, you will see the blue of the thread.’ 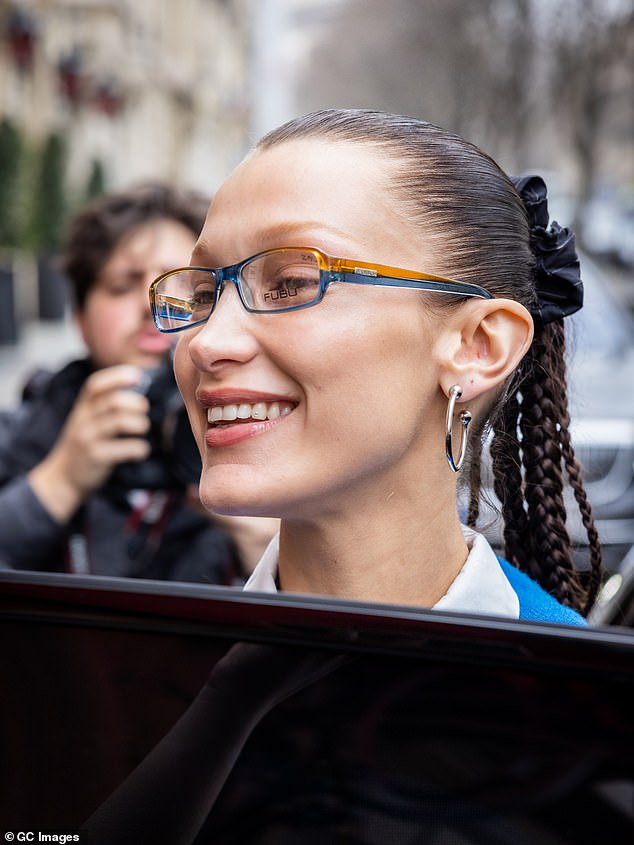 US model Bella Hadid, pictured, is said to be one of the inspirations behind the new trend

Dr Yoo reveals that she took a course on how to do the lift as so many patients wanted it, but swiftly turned her back on it. She adds: ‘I decided quickly that I didn’t want to perform it because of the risks involved. The dangers definitely outweigh the benefits.’

Dr Elizabeth Hawkes, an oculoplastic surgeon – a specialist in eyelid and facial plastic surgery – at the Cadogan Clinic in London, says the procedure is too risky and ‘not best practice’.

In many cases, where the threads used do not naturally dissolve in the body, doctors are unable to remove them, leaving patients with permanent lumps caused by scarring beneath the skin, Dr Hawkes says, adding: ‘When you pull the skin back, the excess has nowhere to go, so it creates dents and folds near the eyebrow.’

Our findings come in the wake of a Government crackdown on rogue cosmetic practitioners, following a rise in botched Botox procedures.

Last week Health Secretary Sajid Javid said he plans to introduce legislation that would make it illegal for practitioners to carry out non-surgical procedures without holding a licence.

Last night a Government spokesman confirmed to The Mail on Sunday that those offering threadlifts will also be subject to the regulation as they ‘have potential to cause serious injury or harm to members of the public’.

Threadlifts have been used by cosmetic surgeons for decades as a minimally invasive method of lifting areas of the face that have drooped due to age, such as the jaw or forehead. 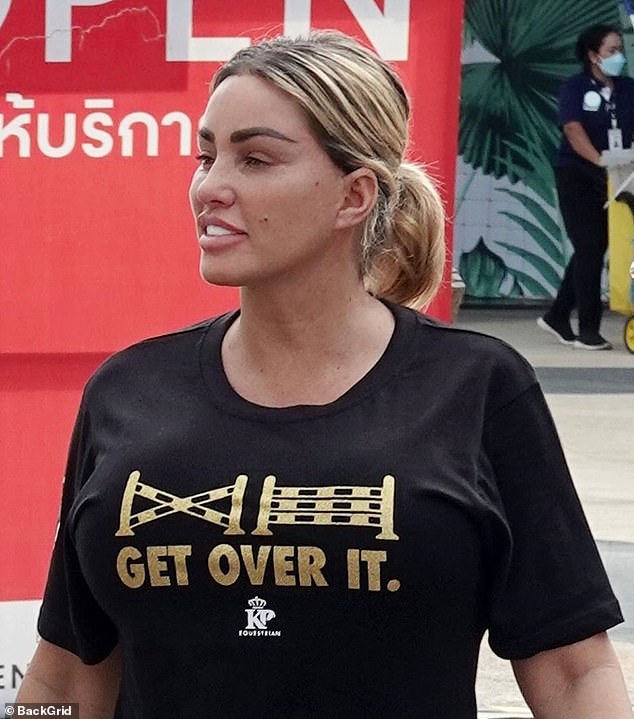 Katie Price, pictured, is also believed to have undergone the procedure which was originally developed as an anti-ageing treatment

The fox-eye lift was originally marketed as another anti-ageing treatment, to resolve sagging skin around the upper eyelids. But experts say it soon became popular with a younger audience wanting to alter their appearance.

The look has been popularised by beautifying filters on apps such as Instagram that make the eyes and lips larger, the skin more even-toned and the face more symmetrical.

And while there may be women who feel happy with the fox-eye threadlift, others have suffered complications. One Australian, Jessie Carr, posted a clip to video-sharing platform TikTok from her hospital bed, where she says she is receiving intensive treatment to try to remove her threads following a burst blood vessel in her temple as a result of the procedure. She also has visible worm-like ridges beside her temples where the threads sit.

‘[My face] swelled up really badly – they popped a blood vessel,’ she says in the video.

‘I blew up for a couple of weeks. Once the swelling went down one of my eyebrows dropped – one was lower than the other.

‘I had to get Botox in one of them [to lift the drooping brow] and then wait a couple of weeks to see if they evened out. I went back for an eight-week check-up but nothing changed. Now I am going through treatment to dissolve the threads and have to take anti-inflammatory pills to dampen down… my face. It is definitely not worth it.’

US patient Chloe Ann, who described the procedure as ‘the most painful thing I’ve ever done in my life’, posted a series of images on TikTok detailing the facial disfigurements she suffered after her fox-eye threadlift.

A picture taken shortly after the procedure shows a swollen lump like a golf ball under the skin on her temple. Another image, taken two weeks later, shows bloody, bruised dents in the lifted skin above her right eyebrow.

‘Once everything was healed my skin was left indented and I had a stupid thread showing in my face for three months.’ What’s more, Chloe Ann says the fox-eye look was gone after the third week.

‘Generally, it looks awful,’ says eye surgeon Dr Hawkes. ‘It’s a very unnatural look based on a social-media trend. The brow is supposed to sit just above the bone and the arch should be in line with the socket of the eyeball – that’s a normal face. Changing the slant of the brow line will make you look very odd.

‘Cosmetic treatments should be used to enhance your natural face, or restore what you used to look like before signs of ageing.’

The stitches are inserted beneath the layer of fat that sits directly under the skin and then pulled upwards. The threads latch on to the tissue and act as a scaffold, helping to keep it upright, defying the effects of gravity.

Scar tissue and collagen that form around the threads are said to help maintain the lifted effect for at least 18 months. A surgical breastlift could coast upwards of £10,000, while buttock enhancement can cost from £3,000. The threadlift versions are advertised for a few hundred pounds. But experts say the risks are significant.

‘With the face, you don’t have to insert the threads particularly deeply for them to latch on to the skin and stay in place,’ says Dr Yoo. ‘But the same isn’t true for inside the body, as the layers of fat are softer and slippery. So you have to put the threads deeper and use more of them to ensure they stay in place.

‘This significantly increases the risk of infection from the threads and makes it more likely an infection will spread to other areas of the body.’

When infections in the deep layers of tissue spread, this can trigger potentially deadly sepsis, an extreme reaction from the body’s immune system.

‘The companies that make the threads do not recommend that clinicians use them on areas other than the face,’ says Dr Yoo.

‘And I don’t know any reputable doctors who would use threads in this way. Or for any cosmetic procedure, to be honest.’

While the Government has vowed to tighten regulation on non-surgical treatments, Ministers have yet to offer a timetable or details on enforcement.

Currently, there are no legal restrictions on who can perform some non-surgical treatments, such as those with Botox and fillers.

Cosmetic clinics, where non-surgical treatments are performed by medical professionals such as doctors and nurses, are regulated by the Care Quality Commission (CQC) – the body that monitors medical establishments including hospitals and GP surgeries. But beauticians who offer cosmetic procedures are not regulated at all.

The CQC told The Mail on Sunday: ‘Where cosmetic procedures (including threadlifts) are carried out by a non-healthcare professional (eg a beautician), they are not subject to regulation by CQC and don’t have to register with us.’

The cosmetic industry is like the Wild West, according to Sally Taber of the Joint Council For Cosmetic Practitioners, who receives at least 30 complaints a week about botched non-surgical procedures.

Of the fox-eye threadlift, she says: ‘We’ve seen terrible infections after threads have gone in, with patients suffering unsightly swelling and needing to visit A&E.

‘Yet still the public seem to keep chasing after these treatments.’

In a statement, a Department For Health and Social Care spokesperson said: ‘We recognise more needs to be done… we urge people to take the time to find a reputable, safe and qualified practitioner.’