A drastic lack of overseas backpackers is to blame for Australia’s cost of living crisis and $12 heads of lettuce.

Fruit and vegetable prices surged by 18.6 per cent in the 12 months to August.

This was even more dramatic than the 15 per cent jump in petrol prices as overall headline inflation soared by 6.8 per cent – approaching levels last seen in 1990.

While floods this year have destroyed crops, a reopening of Australia’s border to foreign tourists in February hasn’t brought back the usual number of short-term overseas visitors – including many backpackers who picked fruit to finance their working holidays.

A weaker Australian dollar also threatens to make imports more expensive, which ANZ warns could cause inflation to keep climbing.

Overseas backpackers, or a lack of them, are to blame for Australia’s cost of living crisis and $12 heads lettuce (pictured is a papaya picker in far north Queensland’s Atherton Tablelands)

Australia’s short-term arrivals total of 348,440 people in August was only a third of the  1.078 million who arrived in December 2019, Australian Bureau of Statistics data shows.

FRUIT AND VEGETABLE PRICES: Up 18.6 per cent in the year to August.

This was much higher than the overall monthly inflation rate of 6.8 per cent – itself near highest level since 1990.

Short-term visitor arrival numbers in August 2022 only a third the level of December 2019 before the pandemic.

Holidaymakers made up 104,140 of those arrivals in August, compared with 514,880 in December 2019, with working backpackers included in that data.

‘If you don’t pick the fruit then it goes to waste and that puts upward pressure on prices of fruit and directly impacts inflation that way,’ he told Daily Mail Australia.

‘Fruit growers are forced to pay higher salaries to get available labour or to draw labour from somewhere else which then means higher costs that they have to pass on to consumers.’

Super Seasons general manager Peter Ceccato said a shortage of available labour was so bad that oranges were rotting on the ground at his orchard in the southern NSW town of Hillston.

This was despite offering work for $45 an hour, only to get zero applicants.

Overripe oranges are rotting on the ground with not enough workers, apart from just 20 guest labourers from Fiji, able to pick it.

Now growers are closing down with some even committing suicide.

‘Suicide is an option, it really is,’ Mr Ceccato told the ABC’s Four Corners program.

‘I do know of people in our industry that have already committed that act. As a direct result, because of not being able to get labour.’ 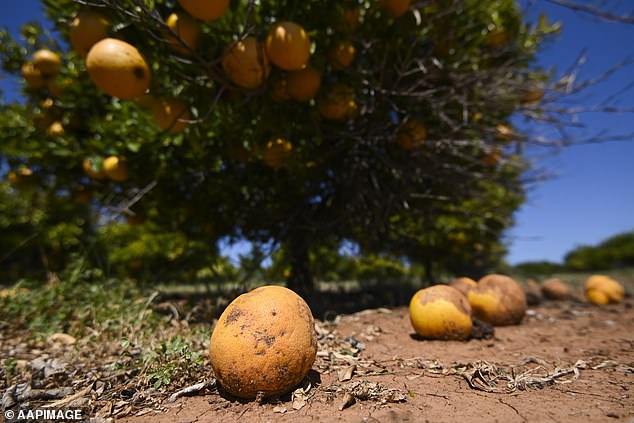 ‘The labour crisis is hurting farmers, it’s hurting the economy, and it’s hitting consumers in the hip pocket,’ he told Daily Mail Australia.

‘Farmers are making the difficult choice not to plant some crops, because they can’t guarantee they’ll have workers come harvest.

‘If crops don’t get planted, less food gets grown, and prices go up.

‘They’ll keep going up until the problem is solved.’

The Food Supply Chain Alliance – which includes the National Farmers Federation and AUSVEG – estimates 172,000 workers are needed from the farm to the dinner table. 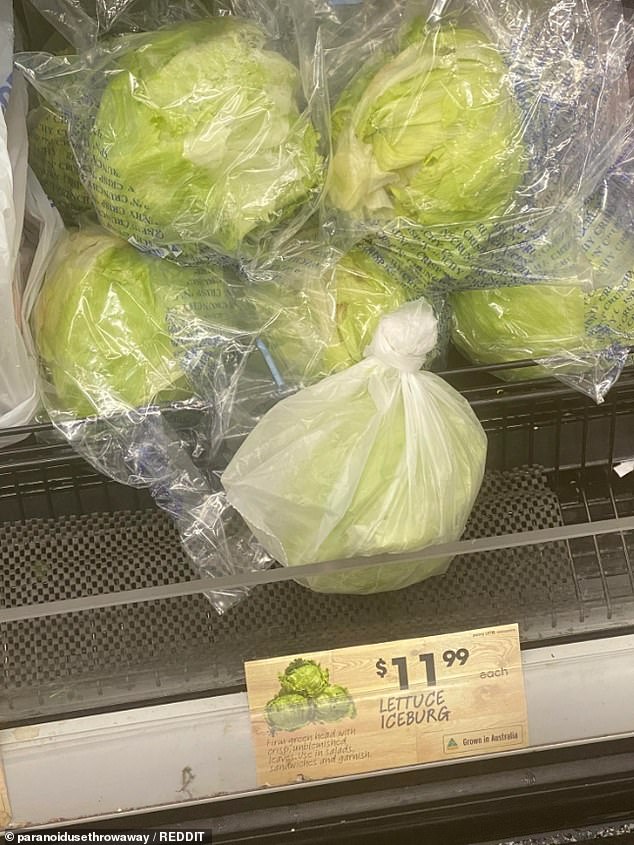 Fruit and vegetable prices in the year to August surged by 18.6 per cent (pictured is an image of an Australian supermarket selling individual heads of iceberg lettuce for $11.99)

They are calling for more foreign workers.

‘This is one of the few cost of living pressures the government can influence, and they need to get serious about solutions,’ Mr Mahar said.

‘We need to pull out all stops. That means getting more Australians into the workforce by lowering barriers like pension rules, and getting more overseas workers on to planes.’

This severe labour shortage is occurring with unemployment in August at a near 48-year low of 3.5 per cent.

The cost of living crisis is occurring as a weaker Australian dollar threatens to make imports more expensive.

The currency has fallen to 63 US cents for the first time since April 2020, having traded at 75 US cents as recently as April.

ANZ head of Australian economics David Plank said a 17 per cent decline in the Australian dollar during the past six months could see consumers paying more for imported goods.

‘The recent decline in the Australian dollar to less than 63 US cents, its lowest level since the early days of the pandemic, looks unhelpful for the inflation outlook,’ he said. 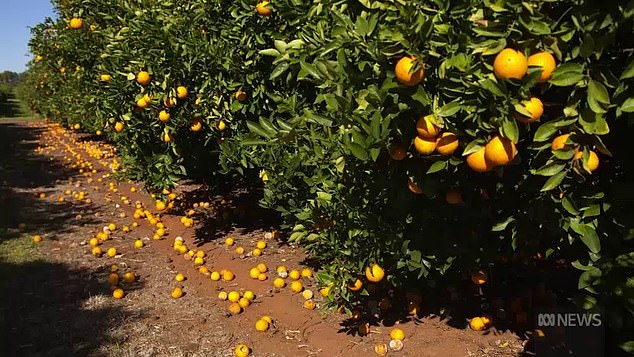 ‘If imports are more expensive, the cost of consumables rise, which directly hits household budgets.’

The Reserve Bank estimates that every 10 per cent drop in the Australian dollar equates to a 1 per cent increase in consumer prices over three years.

‘So it appears that weakness in the Australian dollar will be a source of upward pressure on prices over the next few years,’ Mr Plank said.

The Australian dollar traditionally weakens when investors fear a slowdown in global growth as currency traders instead buy the US dollar, the world’s reserve currency.

Commodity prices, like coal, are still near record highs which means currency traders are reacting to the difference between Australian and American interest rates. 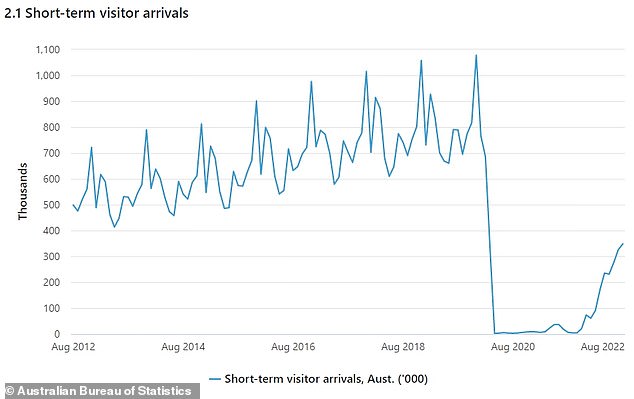 Australia’s short-term arrivals total of 348,440 people in August was only a third of the 1.078million who arrived in December 2019, Australian Bureau of Statistics data shows

The Reserve Bank of Australia has raised the cash rate six months in a row since May, taking it to a nine-year high of 2.6 per cent.

But the US Federal Reserve has been even more aggressive, with its equivalent target interest rate now at a 14-year high of 3 to 3.25 per cent.

American inflation in the year to September rose by 8.2 per cent, not far off four-decade highs.

In Australia, the Reserve Bank is expecting headline inflation to hit a fresh 32-year high of 7.75 per cent by the end of the year – a level more than double its 2 to 3 per cent target.

Dr Oliver said that while short-term arrivals were well down on 2019 levels, international student numbers, classified as long-term arrivals, were back above pre-Covid levels and there were signs of more working holiday visas being processed. 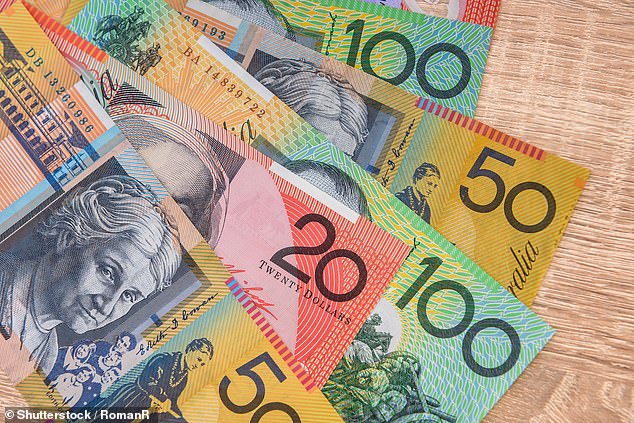 The cost of living crisis is occurring as a weaker Australian dollar (banknotes pictured) threatens to make imports more expensive. The currency has fallen to 63 US cents for the first time since April 2020, having traded at 75 US cents as recently as April

But for now, a shortage of backpackers means Australians are doing the jobs in the cities working holiday visitors used to do, leaving fewer locals able to pick fruit.

‘In the meantime, the backpackers haven’t fully returned just yet.’

Home Affairs Minister Clare O’Neil said she had added 500 new public servants to her department to speed up working visa applicants, with a huge backlog to get through.

‘So we’ve lifted the staffing numbers right back up, not just to where they were in a normal operating environment, pre-Covid, but actually lifted them up significantly in an attempt to get those processing times down,’ she told Four Corners.