Why Billy Slater must not play in the grand final

The brother of footballer James Ackerman, who was tragically killed as the result of a shoulder charge during a game, has told the NRL’s chief that Billy Slater should miss next week’s grand final.

In a heartfelt video posted to Facebook, Mr Ackerman said that whenever a shoulder charge is mentioned, his brother, who died in 2015 during a game in Queensland, comes into play.

Slater has been charged with a grade one shoulder charge and will miss the Melbourne Storm’s grand final match against the Sydney Roosters unless he successfully fights the charge at an NRL judiciary hearing on Tuesday night.

The brother of footballer James Ackerman, who was killed as the result of a shoulder charge during a game, has told the NRL’s chief that Billy Slater should miss next week’s grand final 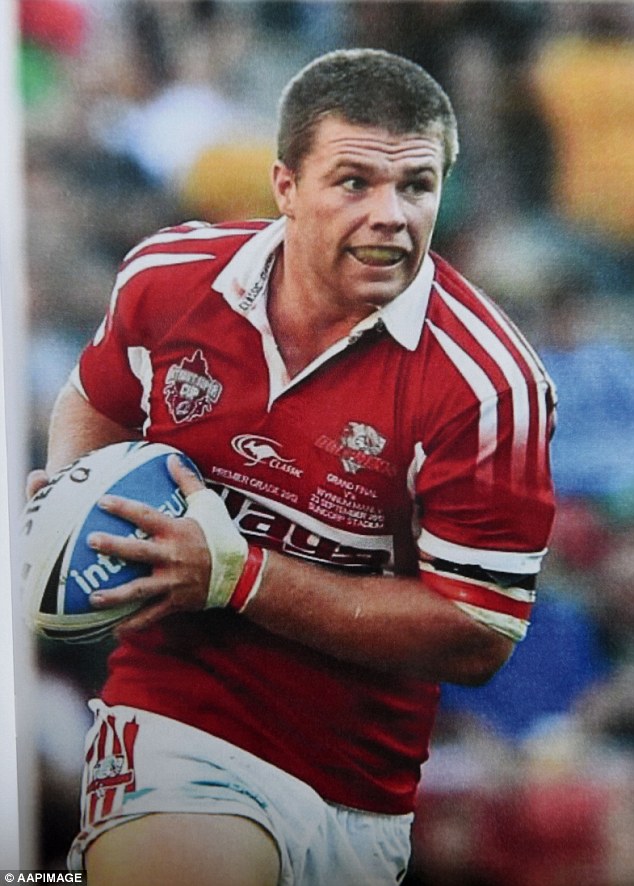 In a video posted to Facebook Mr Ackerman said that whenever a shoulder charge is mentioned, his brother (pictured), who died in 2015 during a game, comes into play

In the video, Mr Ackerman warns NRL boss Todd Greenberg that if Slater is not suspended ‘there is going to be a lot of unhappy people out there. And every one of my family members like me will be voicing their opinion’.

‘Now Billy Slater should be found guilty. I know there was no malice nor intent to hurt in this tackle. No one was injured. But a shoulder charge was used.’

He said the rules of the game do not say ‘that if a player is going to play his last game in a grand final he should be let off’.

‘I just want to point out that I have no hate towards Billy Slater or the Melbourne Storm,’ he said, while holding a picture of his brother. 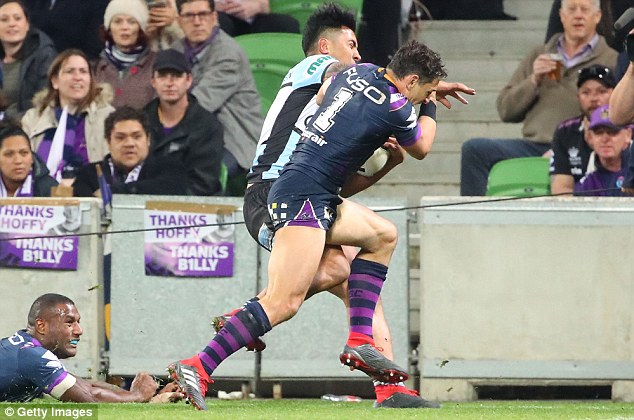 ‘My hate and my family’s hate is for the shoulder charge, whether it be minimal, medium or very bad.’

On Friday, the Melbourne Storm fullback denied Cronulla Sharks winger Sosaia Feki a try in the in the corner in the 13th minute of play with a brutal shoulder charge.

Slater was immediately penalised for the shot which saw him rush in from the blindside and knock Feki over the sideline.

Slater was officially charged for a grade one shoulder charge on Saturday. 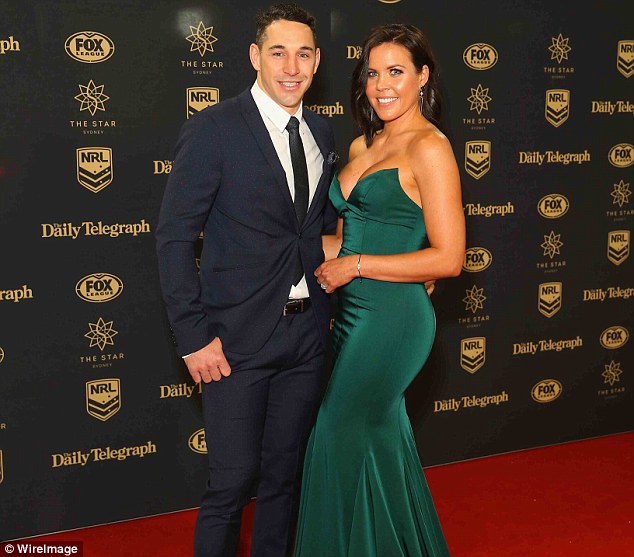 According to the NRL judiciary rules the lowest level of punishment for a shoulder charge is a grade one, which is worth 200 points.

Judiciary rules state that every 100 points constitutes a game suspension so Slater will only be able to play if he beats the charge completely.

An early guilty plea will not help him.

One of Slater’s opponents from Friday, Luke Lewis, has jumped to the star fullback’s defence in the wake of the game.

‘What do you want him to do?’, Lewis told the Herald Sun. 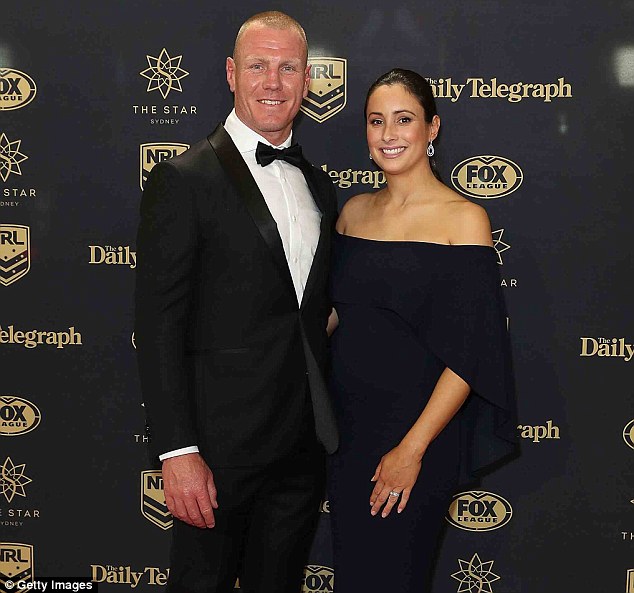 One of Slater’s opponents from Friday, Luke Lewis (pictured with wife Sonia Di Loreto), has jumped to the star fullback’s defence in the wake of the game

‘He’s one of the best defensive fullbacks in the game and you have to stop a try and put your body on the line.’

‘If someone was to miss a game for something like that, I don’t know what our game would be coming to. It’s a contact sport.’

Exactly a decade ago his captain, Cameron Smith, was controversially rubbed out of the Grand Final for a grapple tackle in a final against the Brisbane Broncos.

If Slater does miss the Grand Final pundits are tipping that Storm star Cameron Munster will be moved to fullback.

The tackle is headed towards one of the most controversial match reviews and possible judiciary case in the modern day era of the game.

He potentially faces a minimum two week suspension if charged by the NRL Match Review Committee.

Even a one match suspension would see Slater miss next Sunday’s NRL grand final in Sydney after recently announcing this season would be his last. 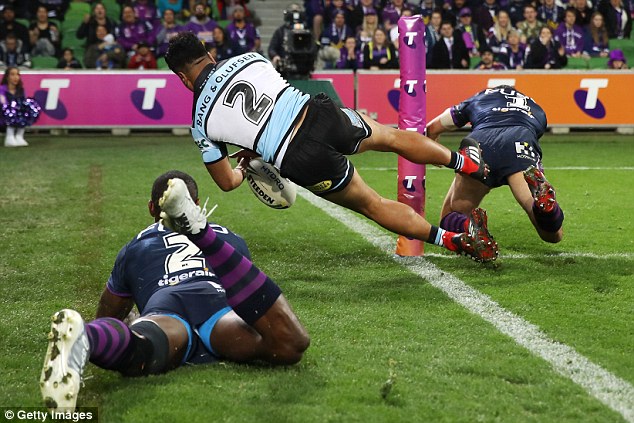 Slater played Friday night’s game like it was his last, scoring a try off a grubber and setting up another to help give Storm a 20-0 half-time lead.

‘If the review committee see that as a shoulder charge that’s an automatic 200 points,’ Brad Fittler said.

Slater didn’t think there was any malice in the tackle. 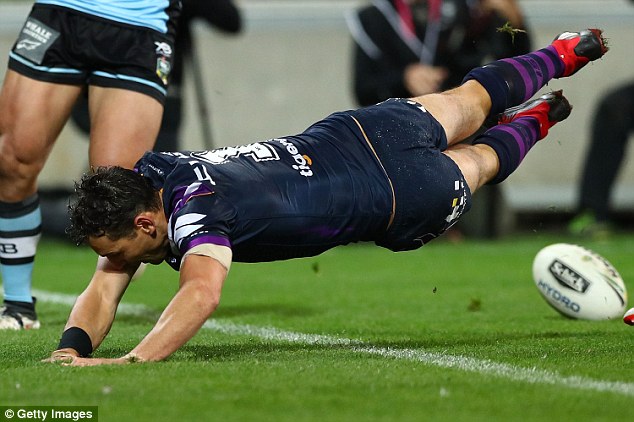 ‘I was coming across at speed and actually thought Feki was going to step back on the inside. It was a collision in the end,’ an emotional Slater told Channel Nine after the match.

‘If Billy Slater misses the grand final because of that innocuous bump that didn’t go high or cause any harm at all they may as well cancel the NRL,’comedian Dave Hughes tweeted. 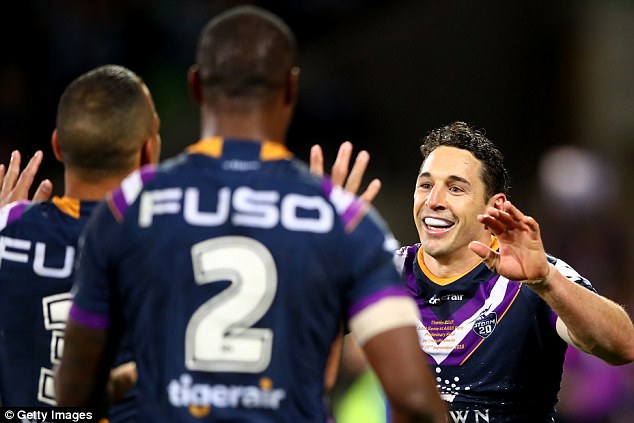