Why Cape Verde is bliss for a winter getaway

The Caribbean closer to home! Cape Verde is bliss for a winter getaway… and it’s only six hours from the UK

By Victoria Bischoff for the Daily Mail

Zooming up and down Sahara-like sand dunes it’s hard to wipe the grin off my face. The wind stings, my eyes are watering and it’s taking some core strength to stop myself flying off the back of the truck.

But the sun is out, and aside from a few roaming goats, it’s as if we have the island to ourselves. This is winter in Cape Verde.

Nicknamed The Caribbean Of Africa, Cape Verde — or Cabo Verde as it’s known to locals — is made up of ten small islands located about 350 miles west of Senegal. Discovered by the Portuguese in the 1400s, its position in the Atlantic Ocean meant it was once a key stop-off point for ships transporting slaves to America.

Crystal clear: Azure waters off Sal island in Cape Verde, which is a six-hour flight from the UK

Today, at just a six-hour flight from the UK, it is increasingly popular among winter sun hunters looking for a closer (and cheaper) alternative to the real Caribbean.

And with no time difference, you escape the dreaded jet lag.

My partner Chris and I visited the two main tourist or ‘beach holiday islands’, Sal and Boa Vista.

Sal’s capital Espargos is in the centre of the island but the main resort town, Santa Maria — where we stayed — is in the south.

Our hotel, the Morabeza, is the oldest on the island, dating back to the Sixties. Sitting on the beachfront, it is wonderfully pretty. We immediately plonk ourselves at the beach bar Aquarius and order the locals’ favourite cocktail — a Caipirinha.

The best thing about Cape Verde is its beaches. You can walk for miles on deserted white sand and cross paths with only a handful of other holidaymakers. Any unwanted noise is drowned out by the roaring wind and waves.

Cape Verdeans have an expression: ‘no stress’. After a day or two, it’s impossible not to adopt the same laidback attitude. 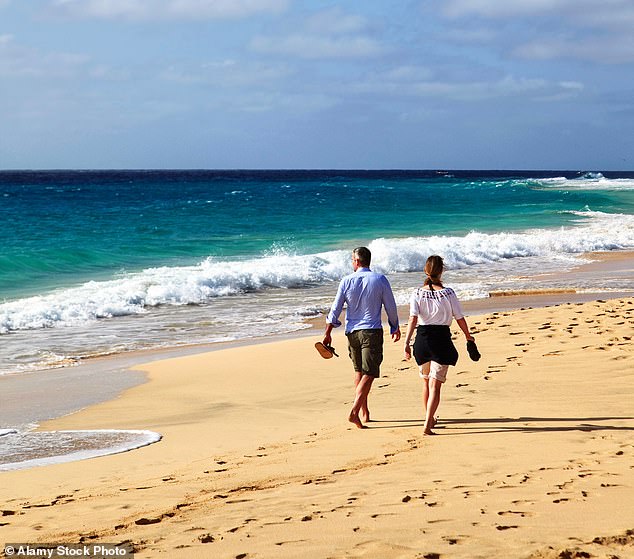 No stress: Strolling along Santa Maria Beach located in the south of the island of Sal

Our guide, Paulo, pulls up to the hotel in a pick-up truck and asks if we want to sit inside or out.

‘Outside’, we squeal, before appreciating that proper roads are rare. The highlight of our tour is taking a dip in the Pedra de Lume salt crater. Like a poor man’s Dead Sea, the water is around 28 times more salty than the sea, allowing you to float effortlessly.

Just a few minutes’ drive down the coast you can wade out across the rocks and paddle with the lemon sharks, which Paulo assures me are ‘vegetarian’. Sal residents are proud of their natural phenomenon ‘the Blue Eye’. Here you can peer down into an underwater cave that glows turquoise when the sun hits it. 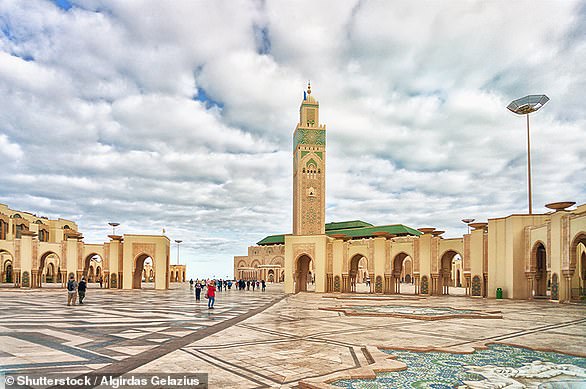 Try Casablanca for an urban hit, then head for the resort of Mazagan. Flight: 3 hours 10 mins. Temperature: 25c.

This is where the Arab world shows off its modern face. Explore fabulous beaches and lush oases. Flight: 7 hours. Temperature: 26c.

Boa Vista is a bigger hub. The main town, Sal Rei, is a 20-minute taxi ride away from the big, plush resorts, and as a result hasn’t developed at the same pace. Its cobbled streets and pastel-coloured houses give it a European feel. But with fresh water expensive and the average wage desperately low, most of the town’s residents live in favelas.

Portuguese is the island’s official language, but in daily life most natives speak Creole or Kriolu.

Unsurprisingly, meals centre around fish. Try the national dish, Cachupa — a slow-cooked stew of corn, veg and fish or meat. Whatever you do — be sure to pack a jacket. The wind can be chilly in the winter. But don’t be deceived — as many lobster-like Europeans at our hotel will testify, the sun is strong even through the clouds. For us, as we sipped our Caipirinhas by the beach, it was hard to remember it was winter at all.