A Victorian publican has thumbed his nose at Victoria’s ongoing Covid lockdown restrictions by re-opening his country pub to pay his bills.

Trevor Andrews reopened his Pastoral Hotel at Echuca, 220km north of Melbourne on the NSW-Victoria border, after making the announcement on Facebook on July 17.

‘Due to the fact that you are allowed to shop at all of the major retail stores who are allowed to operate through this so called ‘pandemic’… while other small business owners are going to the wall … I have made the decision that I am opening my hotel, The Pastoral Hotel Echuca for full dining services in the bistro and bar.’

‘This pandemic will never end and the people of Victoria will never recover if we don’t take a stand!’ he wrote in a follow-up post.

Owner Trevor Andrews reopened the Pastoral Hotel, Echuca, in country Victoria, arguing he should be allowed to open like other retail such as grocery stores 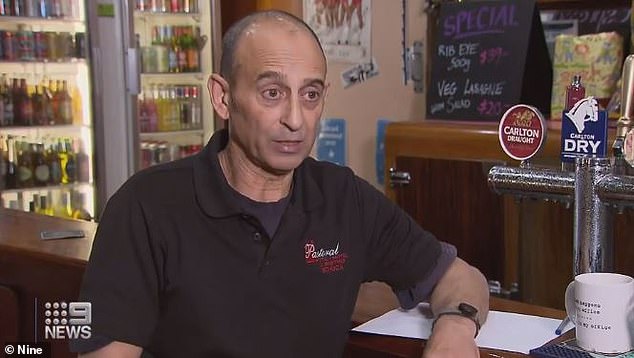 Mr Andrews protested that his business had followed Covid-safe procedures ‘since day one’.

‘We should be allowed to open.’

Despite his claim, a 9News report on his reopening showed patrons without masks and most not observing social distancing requirements.

The extension of lockdown restrictions to rural and regional areas of Victoria was controversial but had been justified by the state’s chief health officer Brett Sutton because a third of the state’s primary close contacts were located there.

‘We’ve seen significant and standalone outbreaks in regional areas — in Phillip Island, in Bacchus Marsh, Barwon Heads and as far away as Mildura,’ Dr Sutton said on Monday.

But Mr Andrews said he had no option but to reopen the Pastoral.

He said local police had visited him this week to warn him that opening to serve beer and food to patrons was not permitted and that he expected he would be fined.

‘The ultimate thing is they can probably end up taking my licence away,’ Mr Andrews said. ”And then I’ve got no pub – the beer but no pub.’ 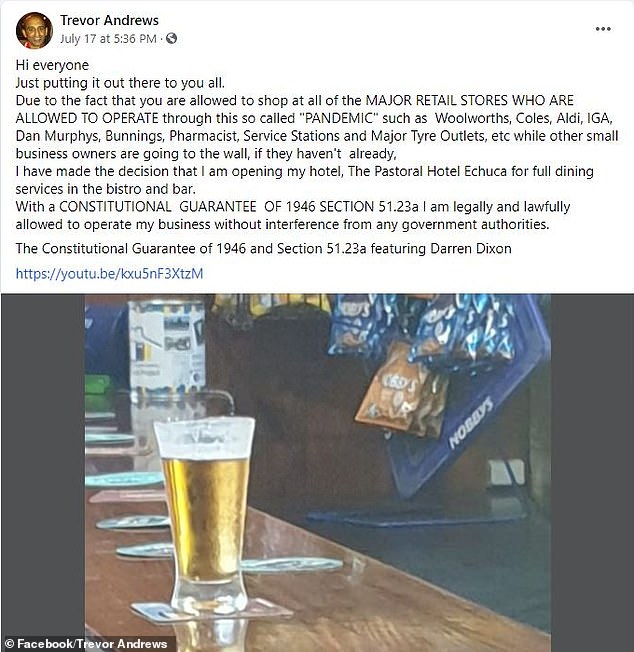 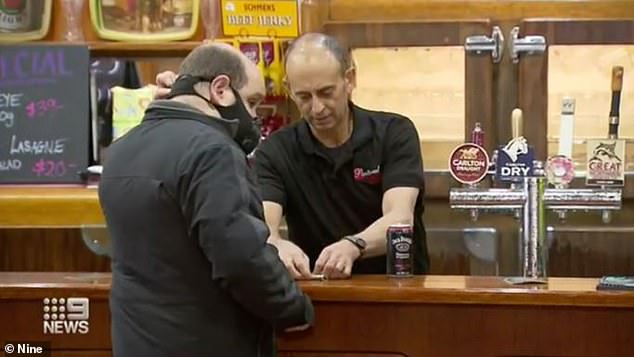 Mr Andrews serves a masked customer at the Pastoral Hotel, Echuca, despite lockdown restrictions which mean the pub should be shut 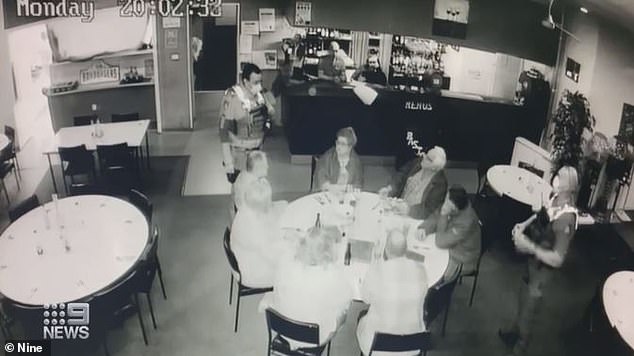 People seen dining in the Pastoral’s bistro on Monday, in breach of Victorian Covid restrictions

Victorian businesses can be issued with a $1,652 on-the-spot fine for lacking QR code and social distancing signage.

Additional fines up to $9,913, or a prohibition notice shutting the business down, can be issued for continued, blatant or wilful non-compliance with the Covid lockdown rules.

Victoria recorded 22 new local cases of Covid-19 on Wednesday as the state entered its first day of an extended seven-day lockdown.

The new community cases were all linked to known outbreaks.

Victoria is in its fifth lockdown since the pandemic hit Australia’s shores early last year and its third one so far in 2021.