Why DO boobs sag? World-first study will try to answer the age old question

The first ever scientific study to find out why women get saggy breasts will be carried out by researchers in the UK.

Experts at the University of Portsmouth will conduct a two-day study to scan women’s breasts and analyse them while the women walk on a treadmill.

During the experiment next month they hope to find out why some breasts droop over time, and by how much they do so.

The findings could help clothing companies develop better bras, the researchers say, and they’re calling for women to volunteer to be part of the study. 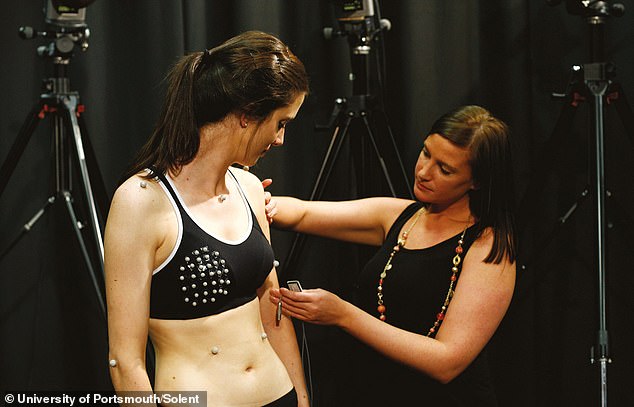 The University of Portsmouth is calling for volunteers to join the world-first study, and is offering £30 in return for women taking part in the breast scans and treadmill walks at St Mary’s NHS Treatment Centre in Portsmouth, Hampshire

‘This research will be the first time scientists will have evidence on whether the density of breasts affects their movement,’ said senior researcher Dr Tim Blackmore.

‘The results will allow us to better understand the demands different women’s breasts put on bras and, for example, why one bra design won’t work for every woman.’

Women will be offered £30 to take part in the study, in which they will have MRI and 3D scans taken of their breasts.

They will also walk on a treadmill so scientists can analyse how their breasts move when they walk, to work out how that affects their shape or position over time.

Scans will also be used to work out the proportions of fat and glandular tissue inside women’s breasts.

The two-day study is being run by the Research Group in Breast Health, which is based at the Hampshire university. 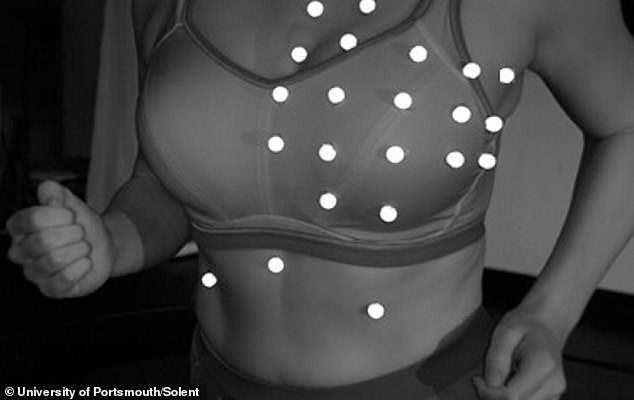 The group has become a leader in breast studies over the last decade, with its scientists working with lingerie manufacturers, the military, the NHS and other organisations to test bras.

The tests will be carried out next month at St Mary’s NHS Treatment Centre in Portsmouth.

Hospital director Penny Daniels added: ‘This is a worthwhile project.

‘Not only may it allow greater comfort for women everywhere at the end of a very long day at work, but it may also reveal valuable insights into women’s health and wellbeing.

‘I would encourage women to consider participating.’

SHOULD YOU WEAR A BRA TO BED?

Film star Marilyn Monroe wore a bra in bed, saying it stopped her breasts from sagging.

But although her approach has been dismissed over the years, it seems there is some truth in the belief that women with larger breasts can benefit from wearing one while they sleep.

Bigger breasts can drag and pull sideways when a woman lies down, contributing to stretch marks as well as crease marks between the breasts over time.

Indeed 24-hour bras, which come with less rigid boning, are now on sale for women who prefer more support at night.

Professor Scurr says: ‘The research suggests that the region of the breast which experiences most pain is on the outside. So for some women, that sideways pull when they lie horizontal can be more uncomfortable than the up-and-down pull when they are standing up.

‘There are no negative factors associated with wearing a bra all of the time. So if women find they get relief by wearing a bra at night, there’s no reason why they shouldn’t.’