Captain Peter Baumgart gunned the three mighty engines of his Junkers 52 as it stood on Berlin’s wide Hohenzollerndamm boulevard.

The street was festooned with the rubble of war, including burned-out tanks and half-tracks, shell holes and corpses.

Three o’clock on the morning of April 28, 1945 in west Berlin was emphatically not the time and place to be trying to run a passenger service up to the border with Denmark.

But Baumgart had his orders, and as well as being a loyal member of the Luftwaffe, he was also a captain in the dreaded SS – further proof, if it were required, of quite how loyal he was to the Nazi regime.

Range of theories: People thought Hitler had escaped Berlin with Eva Braun by his side to Patagonia but the idea has been rejected by experts

Baumgart looked out of his cockpit as a group of men and women all wearing helmets emerged from three tanks. As the noise of the Red Army artillery besieging the city thundered menacingly close, the group hurried aboard the plane and, as the door slammed shut, Baumgart took off.

After climbing for nearly 20 minutes, the aircraft levelled at 10,000ft. Although they would now be immune from ground fire, there was a strong chance they could be intercepted by Allied night fighters.

Nevertheless, the members of the group felt safe enough to remove their helmets. It was only at that moment that the identity of the leader of the group was revealed – it was Adolf Hitler. Overwhelmed with trepidation, Baumgart was also honoured – and delighted. In helping the Führer to escape, this surely meant that the Third Reich was not ready to die.

Claims that Hitler did not die in a Berlin bunker but instead escaped might seem far-fetched. 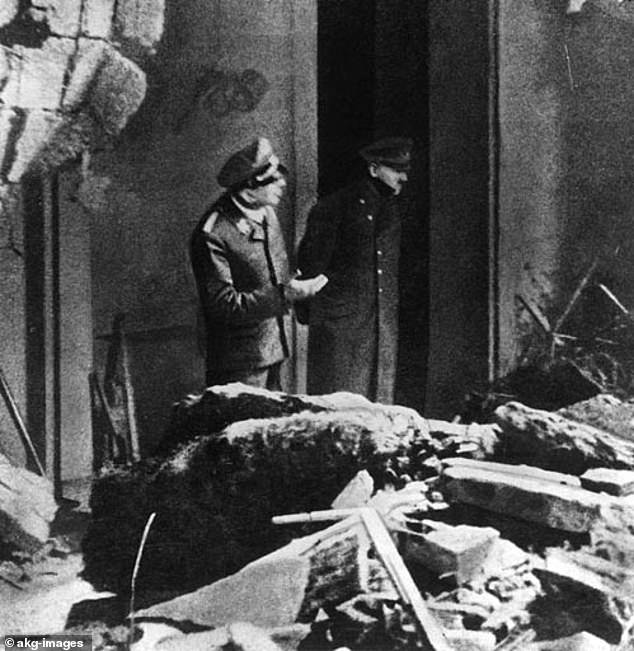 The last sighting: Hitler was last seen inspecting the bomb damage to his bunker at the Reich Chancellery in Berlin before he committed suicide

Yet fantasies such as this one, drawn from the popular ‘history’ book Grey Wolf: The Escape Of Adolf Hitler, are now believed by millions all around the world.

Indeed, there is a plethora of TV shows and popular books dealing with this piece of seeming historical fact, including Hitler In Argentina: The Documented Truth Of Hitler’s Escape From Berlin and a successful big-budget show on the History Channel called Hunting Hitler.

Lasting for three seasons, it pulled together a globe-trotting investigative team that included a former CIA officer, a war-crimes investigator, and even the Second World War historian James Holland. No wonder viewers were impressed.

There are many variations of Hitler’s escape, but most seem to feature him flying from Berlin, being spirited across the Atlantic by U-boat, landing in Argentina and living out his days with Eva Braun in obscurity in Patagonia, the southern tip of the country. 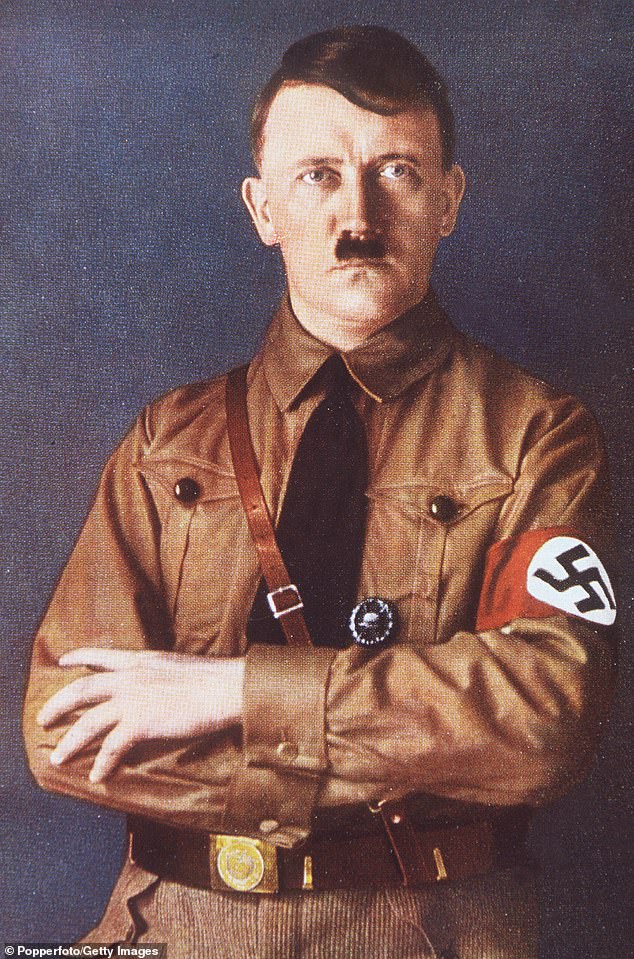 As a historian myself, I am shocked at quite how widely and deeply the story has spread, thanks partly to the internet. Not a week goes by without someone attacking me for daring to dismiss the idea that Hitler hotfooted it out of his bunker.

Fortunately, an incisive new book by Luke Daly-Groves has come to the aid of those determined to tell the truth with a brilliant demolition of the conspiracists.

By combing through hundreds of British and American secret intelligence files, Daly-Groves has built up a formidable case to demonstrate that Hitler did, in fact, kill himself in his bunker on April 30, 1945, and that claims he flew out of Berlin to spend his twilight years in Argentina are pure hogwash.

I hope this will shut up the Hitler-hunters once and for all.

HOW DENTISTS DRILLED DOWN TO THE TRUTH

It is hard to envisage a tougher place to investigate a death than a city that has been reduced to rubble and littered with corpses. But that was the challenge facing the Allies in the summer of 1945 when they were needing to find proof that Adolf Hitler had indeed taken his own life.

As Berlin had fallen to the Red Army, the Russians had the head start on the investigation, and it was they who found the charred remains of two corpses in the gardens of the Reich Chancellery. 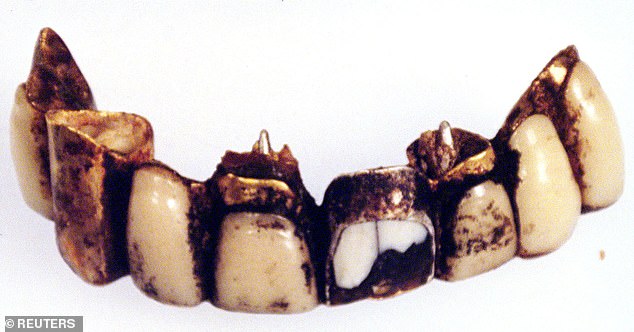 What was most notable about the male corpse was the significant amount of dentistry that had been carried out, including crowns, fillings, false teeth and some extremely distinctive bridgework, which included a bridge shaped like a telephone.

The Russians knew that the key to identifying the remains was to track down Hitler’s dentists, and when they did so, they found that the fragments of teeth and jaw matched not only Hitler’s dental records, but also a set of X-rays.

Naturally, all this was – and remains – incontrovertible proof that Hitler had indeed died.

Of course, if you look up the names of Hitler’s dentist and his assistant in a book such as Grey Wolf, you will find no mention of them, because the conspiracy theorists always find it hard to explain how Hitler managed to escape without his teeth and parts of his upper and lower jaw.

CONNED BY THE KREMLIN CONSPIRACY

The conspiracists have been immeasurably helped by the Russians themselves, who for many years following the war decided to keep the proof to themselves.

Stalin was keen – just like his successor in the Kremlin today – to sow division and discord in the West by suggesting that the British or Americans were sheltering Hitler. As a result, fake news started to spread, and soon newspaper reports were appearing all over the globe claiming that Hitler had, in fact, escaped.

In turn, this prompted a vast number of reported sightings of the former Führer, including the startling revelation that he was disguised as a monk, or that he was living in American cities such as New York, Washington DC and Charlottesville, or that he had been seen boarding a submarine in the Canary Islands.

Many of these supposed sightings were reported to various Allied intelligence agencies such as the FBI, and today a lot of the formerly secret files are open to the public. Naturally, for those promoting the idea that Hitler escaped, these are a gold mine, as they provide hundreds of supposed ‘leads’.

However, as Daly-Groves reveals, what the theorists gloss over are the sections in the files that reveal that, when the sightings were followed up, they were shown to be bogus. Such truths are inconvenient for the Hitler-hunters.

In order to scotch the spread of fake news and Russian disinformation, the British decided to commission an inquiry of their own. At the time, the Russian denied them access to any autopsy and dental reports.

The historian Hugh Trevor- Roper was instead required to play detective. (Later, as the years went by, the Russian archives would be opened.)

Even so, what Trevor-Roper achieved in just a few weeks was impressive, as he managed to interview many witnesses to Hitler’s last days in the bunker.

What their combined testimony pointed to was unassailable – that Hitler and Eva Braun had killed themselves, and their bodies had been incinerated in the Chancellery garden.

Although Trevor-Roper found that there were discrepancies between some of the eyewitness accounts, as any detective will tell you, it is more suspicious when all the statements agree, as this suggests collusion and cover-up.

Again, conspiracists maintain that Trevor-Roper was simply not qualified for the job, and that his report – which he later published as a bestselling book – is therefore not credible. This is nonsense. As Daly-Groves points out, it is hard to think of a man who was better qualified to pick his way through the rubble and holding-pens of post-war Germany, interviewing witnesses.

Trevor-Roper was a tremendously experienced officer in MI6 – the Secret Intelligence Service – spoke and taught German, was the leading expert on the Abwehr (the German military intelligence organisation) and once even cracked an Abwehr code while he was in the bath during an air raid.

Trevor-Roper was supremely qualified, and anybody who reads his report in the files, or who buys his book, will be left convinced.

THE MAN WHO SAW THE FUHRER ON FIRE 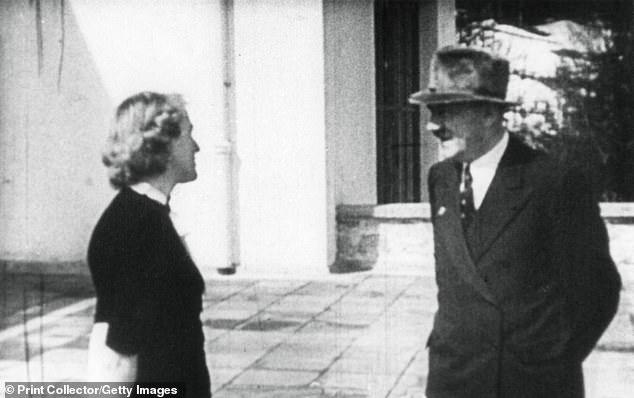 Bodies discovered: It was a guard who claimed he saw Hitler and Eva’s bodies on fire ‘two metres from the emergency exit’ of the bunker

Of all those who were interrogated for Trevor-Roper’s report, according to Daly-Groves, one of the most important was a guard at the bunker called Hermann Karnau, who stated that he had seen the bodies of Hitler and Eva on fire ‘two metres from the emergency exit’.

In his book, Daly-Groves reproduces a sketch map drawn by Karnau that has never been published before, and shows the location where the two bodies were buried.

Crucially, this map tallies precisely with testimony provided by other witnesses that can only be found in the Soviet archives.

Again, this is another piece of evidence that would be proof alone, but there is more.

SILENT WITNESS WITH THE FINAL ANSWER

Naturally, the conspiracists have their ‘answers’, and claim all sorts of nonsense, including the absurd suggestion that the bodies that were incinerated were doubles. Again, this theory is totally undermined by the forensic evidence that the conspiracists claim does not exist.

Of course, what they deliberately ignore are the well regarded academic papers, one published just last year, that conclude that the dental remains – which ended up in an archive in Moscow – are those of Adolf Hitler.

One paper, written in 1972 and catchily titled The Odontological Identification Of Adolf Hitler, compared dental reports, testimonies by dentists and X-rays.

The paper’s conclusion was unassailable: ‘The accumulated evidence now provides definitive odontologic proof that Hitler did in fact die, and that the Russians did indeed recover and autopsy the right body.’

Last year’s paper appeared as a letter in the European Journal Of Internal Medicine, and was sent in by Professor Philippe Charlier, a specialist in medical and legal anthropology, and various colleagues.

Again, the conclusion could not have been more clear: ‘Regarding the jaws elements (bone, teeth and prosthesis), confrontation with the official autopsy data from the Russian archives, and the official radiographs of Adolf Hitler from the US archives, together with additional historical data from both sides, provides sufficient pieces of evidence in the definitive identification of the remains of the former Nazi leader Adolf Hitler.’

Even without this overwhelming forensic evidence, the witness statements and intelligence reports alone are enough to prove that Hitler had killed himself in the bunker. As one somewhat waggish Foreign Office official observed in October 1945: ‘I think the onus is now not on His Majesty’s Government to prove that Hitler is dead but on Hitler to prove that he is alive.’

So far, Hitler has failed to do so. As we approach his 130th birthday, it looks unlikely that will ever happen – although doubtless the conspiracy theorists will say otherwise.

Of course, conspiracists always insist their detractors should prove that something did not happen, rather than advancing proof that something actually did happen.

Ultimately, those who believe Hitler escaped do not have any proper arguments – they are guided by faith rather than rationale, and are motivated more by a desire to kick against authority rather than engage in grown-up historical enquiry.

This growing Hitler industry might be good for the bottom line of publishers and programme- makers. But it is thoroughly disreputable. They are promoting the historical equivalent of fake news – junk history.

Hitler’s Death: The Case Against Conspiracy, by Luke Daly-Groves, is published by Osprey.