She’d made after-school arrangements for her three youngest children, given her husband recipes for their favourite pasta sauce and, of course, written her will.

All essential undertakings, given there was a 50 per cent chance she would not survive the surgery to stop internal bleeding in her abdomen. But there was one thing she hadn’t done – tell her children what was about to happen.

Julie Walters admitted to hiding her stage-three bowel cancer from her grown-up daughter, Maisie. The 70-year-old waited until after her successful chemotherapy treatment to reveal the truth

Not even her eldest, Sam, who was 19 at the time. Nor Niamh, then 11, Sebastian, five, or Orla, who was only three. It was, she says, a very deliberate decision.

‘There was no benefit in telling them,’ says Sarah. ‘Sam was old enough to understand. He would have just been worried without me there for emotional support.

‘My husband Giles played it down, and said I had a minor problem but didn’t specify what.’

Sarah is not alone. Last week, actress Julie Walters admitted to hiding her stage-three bowel cancer from her grown-up daughter, Maisie. The 70-year-old waited until after her successful chemotherapy treatment to reveal the truth. And, as startling as it may seem, experts suggest this approach is not uncommon – especially among women.

Sarah, now 48, also kept quiet about the severity of her condition. One night in 2009, a pain in her abdomen became unbearable. With her husband at work and the children in bed asleep, her parents – who lived next door – quietly called an ambulance. ‘When I got to hospital they did scans and found extensive internal damage,’ says Sarah, a charity worker.

‘The clips that had been used during the removal of my gall bladder a few years before hadn’t worked. Doctors said the damage was too complicated to correct – there was a 50-50 chance I would not make it.’ Sarah’s parents told her children she’d gone to hospital for a minor procedure and would be back within a week.

In fact, she was in intensive care, fighting for her life. Yet, her plan didn’t quite work out. ‘Sam surprised me with flowers at the hospital one day, thinking I’d be up and chatting,’ says Sarah. ‘But he was visibly traumatised by what he saw, all the tubes and wires.’

But Sarah doesn’t regret her secrecy. ‘I didn’t want him to worry about me dying,’ she says, simply. But she does wonder about the lasting impact. ‘Now, if I have a cold or the slightest pain, Sam orders me to go to hospital,’ she says.

‘And I suffered a bout of depression after the operation, which may have been because I didn’t speak to anyone about it. But in the past few months I’ve started drip-feeding them the truth.’

So why all the secrets? And do they come at a cost?

When asked why she hid her cancer from her only child, Julie Walters replied: ‘I couldn’t bear the thought of everyone worrying.’

It’s the most common reason for keeping quiet, says Professor Dame Lesley Fallowfield, a psychologist who works with cancer patients.

The desire to protect our children overrides any logic and practicality, she explains, adding: ‘While some men take a similar approach, the instinct does seem to be stronger in women.’

Some experts believe the reason may be biological – due to changes that occur in the brain after childbirth. The amygdala, the brain’s emotional centre, grows in women after having children, studies have shown. This is said to be an evolutionary tool, to make mothers hyper-aware of their offspring’s needs, such as hunger or signs of danger. But it can lead to what neuroscientist Dr Pilyoung Kim calls ‘obsessive-compulsive behaviours’. ‘Mothers report high levels of patterns of thinking of things they cannot control,’ she says.

This includes uncontrollable worries about how a child is feeling. Some experts say these thoughts drive mothers to act irrationally to protect their children. While fathers can develop similar brain changes over time, scientists at Chapman University in California note this is more common in men involved in care-giving.

It’s not only biology that causes mothers to keep quiet. ‘In times of worry, humans look for something we can control to provide a sense of stability,’ says Emily McBride, health psychologist and behavioural scientist at University College London. ‘Focusing on things you can do to stop children finding out provides that. Not being able to control other people’s reactions is too much for some to bear.’

A survey by charity Carers UK found 95 per cent of carers regularly cover up their poor health.

‘If you do a lot of caring, it’s common to see yourself as the strong, responsible one,’ McBride says. ‘A diagnosis gives you another label – sick, ill, vulnerable. Sticking to our regular roles make us feel safe.’

For 49-year-old Anna Crehan from Birmingham, the decision to hide two years of bowel cancer treatment from her two teenagers was perhaps understandable.

‘My eldest Louise, who was 15 at the time, has Down’s syndrome,’ says the teacher. ‘I didn’t want them to think of me as weak and ill.’

Chemotherapy appointments were during school hours, so Anna didn’t have to tell them. ‘Thankfully, it wasn’t the type that makes you lose your hair,’ she says.

Louise, now 28 and Anna’s son Niall, now 19, were aware she had to go to hospital appointments – but were never told why.

Yet two years after being given the all-clear, she was rumbled.

‘Niall was at a sleepover and his friend’s mum blurted it out,’ she says. ‘He came home terribly upset and I had to reassure him I wasn’t sick any more’.

Now, almost a decade after treatment, she says both children remain unscathed. ‘Louise is still none the wiser. Niall came to terms with it really quickly.’

While none of the mothers we spoke to regret their decision to keep their illnesses a secret, experts advise that, in general, honesty is best.

Mother-of-two Afsaneh Parvizi-Wayne was diagnosed with bladder cancer in 2018 – but only told her children, Sophie, 19 and Darius, 18, five months later.

‘I didn’t want to tell the children until I knew exactly what the plan was,’ says the businesswoman, now 55, from North London. ‘I had to know the prognosis and the treatment.’ 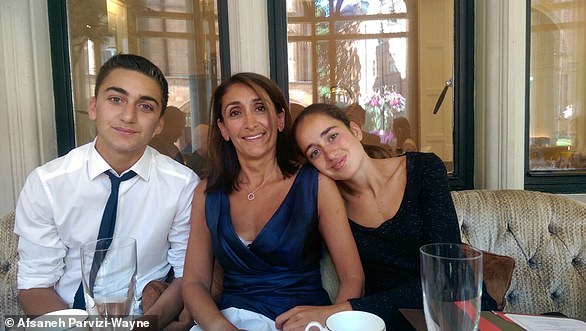 Afsaneh Parvizi-Wayne, pictured with her son Darius and daughter Sophie

But doctors stressed her prognosis was good. ‘Once I had that information I could tell Sophie over the phone, who told her brother,’ says Afsaneh, founder of women’s health company, Freda Health. ‘Sophie was surprisingly calm but Darius rushed from his university halls in Oxford and wanted to know if I was going to die.’

Afterwards, she kept details about appointments to a minimum. ‘I wanted us to all get on with our day-to-day lives instead of thinking about it all the time,’ says Afsaneh, who is now cancer-free.