Why does air come out my ear when I blow my nose? DR MARTIN SCURR answers your health questions

Air escapes from my ear when I blow my nose. I can even blow bubbles out of it when I’m underwater. It’s not painful but surely it can’t be right? I’m 67.

Air coming out of the ear is a classic sign of a perforated eardrum. The eardrum (or tympanic membrane) is a paper-thin structure that separates the outer ear from the middle ear.

The external ear canal, where wax accumulates, is only 2.5 cm in length and the eardrum — which is just 8 mm in diameter — is easily perforated or burst.

Potential causes include untreated middle ear infections and physical injuries, including those inflicted by cotton buds (a reason why you should avoid using them to clear your ears).

You say in your longer letter that you’d previously burst your eardrum in the same ear many years ago in a swimming accident; being able to blow air out of your ear as you describe indicates that the healed perforation has broken down.

Air coming out of the ear is a classic sign of a perforated eardrum. The eardrum (or tympanic membrane) is a paper-thin structure that separates the outer ear from the middle ear

This has upset the normal process where air pressure inside the head is ‘regulated’ by the Eustachian tube.

Normally, the Eustachian tube — which connects the middle ear to the area behind the nose — equalises air pressure inside the head with that outside. So, for instance, when you blow your nose or descend in a plane, the internal pressure rises, so the

Eustachian tube ‘opens’ to regulate the air pressure. It also opens naturally when we chew, yawn or swallow (you may hear a ‘click’, which is the sound of the valve closing again).

However, in your case, the eardrum has torn. The scar on it meant it would never have been as strong as the original structure and at some stage you must have sneezed or subjected the eardrum to pressure, which has ruptured it again.

The worry is that water may enter the middle-ear cavity when swimming or showering and you end up with an infection, which can cause complications.

For that reason you should see your GP and be referred to an ear, nose and throat (ENT) specialist, with a view to surgically repairing the tympanic membrane (typically under a general anaesthetic, but as a day case).

I have a rather large goitre which gives me problems with throat clearing and acid reflux, causing coughing, mainly at night. I’ve taken omeprazole but it doesn’t seem to help. What else would you recommend?

The term goitre means abnormal growth of the thyroid, a butterfly-shaped gland in the front of the neck that straddles the windpipe, with a lobe on either side. An enlarged thyroid can affect the oesophagus (gullet), which sits behind the windpipe, or displace or even compress blood vessels in the neck.

In the UK goitre is usually linked to autoimmune conditions — typically Graves’ disease, where the thyroid becomes overactive.

This affects hormone levels and I’m confident your doctor will have checked these, which suggests you have what is called multinodular goitre.

This is where the thyroid enlarges slowly over many years without causing symptoms, although eventually the windpipe may become compressed, causing breathlessness on exertion (this occurs in more than 30 per cent of cases).

Some patients find the breathlessness occurs in certain positions, for example, when bending forwards. Around 10 per cent of patients experience coughing, and a sense of choking, and this, too, may be related to their position.

Problems swallowing are reported less commonly — acid reflux is not a recognised symptom but could simply be coinciding with the goitre.

So is your cough due to acid reflux or compression of your windpipe by your enlarged thyroid?

Omeprazole suppresses acid production and, therefore, relieves coughing due to reflux. But you’ve not found it effective, suggesting the thyroid is the problem.

Options include surgically removing the gland or ‘shrinking’ it with a single oral dose of radioactive iodine — this reduces the gland by between 30 and 60 per cent over a number of weeks.

I’d advise having an ultrasound to check the extent of windpipe compression. A specialist thyroid surgeon would then be able to advise you.

The acid reflux may remain, but there are further medical options that could suppress this.

IN MY VIEW: Don’t worry about the wait for your second Covid jab

Are you one of those still waiting to hear about your second jab, with the clock ticking towards the 12-week timeframe promised?

After nearly 11 weeks, I’ve just had mine, but I know some readers have waited longer than this, and are anxious about the delay.

Personally, I don’t think a longer wait between the two doses is a cause for concern. But I do fear the Government has been bad at explaining why (and not for the first time).

When it announced that the second shot (a booster for greater immune protection) would be given after 12 weeks rather than four, this seemed arbitrary rather than based upon evidence — only further damaging the confidence of those unsure of the vaccine. 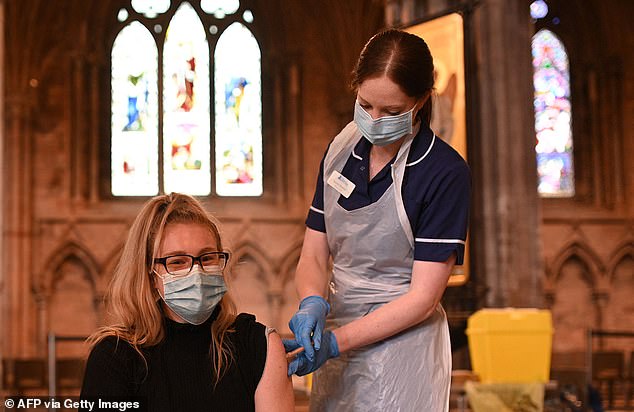 Are you one of those still waiting to hear about your second jab, with the clock ticking towards the 12-week timeframe promised?

The fact is the immune system does not clock-watch. In the past, we gave injections to infants at three, six and nine months. Then it was changed to two months, with boosters at three and four months.

The evidence showed that compressing the vaccine timings didn’t make them less effective or less safe. The same applies for extending the schedule for Covid-19 immunisation. The first jab gives excellent protection; the booster reinforces that regardless of the timing.

Indeed, research shows that with the AstraZeneca jab, immunity is much higher if given at 12 weeks or more (up to 91.7 per cent effective) than when given less than six weeks apart (69.7 per cent).

We don’t know yet if this is true for the Pfizer jab, but in my view it’s a fair assumption. Those concerned about a slightly longer wait should be reassured.

My greater worry remains about those who are eligible but haven’t had their first jab, and what can be done to turn the heads of anti-vaxxers. Shouting statistics ever louder is not the answer: we need clear explanations from our peerless chief medical officers.