Why Harry Kane’s wife can’t get any closer to her hero than the Danish defence: England ace scored winner in tense semi-final… but after five weeks, Covid bubble means this is as near as he can get to his beloved Kate

While he’s been carrying the hopes of a nation with his goals, she has been left holding the fort – and their three children – at home.

But Kate Kane was finally reunited with husband Harry at Wembley on Wednesday night, well almost.

Yesterday Mrs Kane shared a selfie of her and the England captain – separated by a giant banner. The 28-year-old wrote: ‘Kane you believe it.’

The moment, after England’s semi-final triumph in which Kane, 27, scored the winner, is the closest contact they’ve had in five weeks due to strict Covid protocols.

Now, thanks to his team’s heroics, they will be separated for a little longer – until after Sunday night’s final against Italy.

Off the pitch, players at Euro 2020 must not have contact with anyone outside their team bubble. That meant the Kanes were unable to be together to celebrate their second wedding anniversary on June 19.

Mrs Kane has attended every England match except the quarter-final against Ukraine, which was played in Rome, Italy. 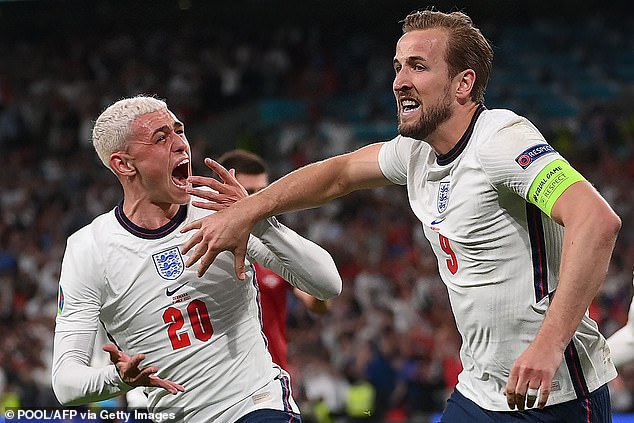 The snap came after England’s semi-final triumph in which Kane, 27, scored the winner (pictured celebrating alongside Phil Foden) 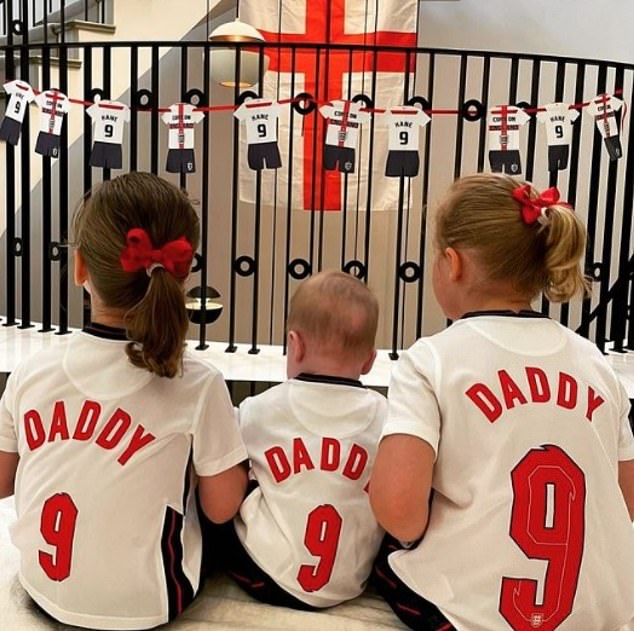 During the tournament, she has shared snaps of their daughters Ivy, four, and Vivienne, two, and son Louis, six months

During the tournament, she has shared snaps of their daughters Ivy, four, and Vivienne, two, and son Louis, six months. One image showed them in full England kit with ‘Daddy’ and his number, 9, printed on their backs.

Harry Maguire’s fiancee Fern Hawkins also posted an image of the giant banner yesterday, showing it separating her from the central defender.

She wrote on Instagram: ‘The closest I’ve been to you in five weeks, but getting to the finals makes it all worthwhile. BRING IT HOME BABY’

Following England’s exciting victory, the Wags , their families and the players’ families celebrated into the early hours at an after-party at the Hilton hotel next to the stadium.