Ambulance officers refused to send a helicopter to rescue a rugby league player who later died from a tackle because he was ‘probably going to die anyway’.

Grant Cook, 28, died after collapsing on the field during a match in Murwillumbah, northern NSW, on September 11, 2016, following a hard hit to the head.

The father-of-two walked to the sidelines after tackling an opponent but collapsed and went into ‘convulsions’ minutes later.

A doctor at the scene gave him CPR when he went into cardiac arrest and he was rushed to Gold Coast University Hospital where he died the next day.

An inquest was told Mr Cook died from second impact syndrome, where someone suffers a concussion before recovering from an earlier one.

Grant Cook, 28, (pictured with his wife Colleen) died after collapsing on the field during a match in Murwillumbah, country NSW, on September 12, 2016, following a hard hit to the head

No rescue helicopter was sent to the scene by NSW Ambulance, much to the surprise of the paramedics on shift that day.

A statement to the inquest by Byron Bay Detective Constable Gary Sheehan relayed a November 1, 2016, conversation with Roland Murcott, a paramedic who crews ambulance helicopters.

‘As soon as he saw the job he believed that it was a classic case where the [helicopter] ambulance crew should be involved,’ DSC Sheehan said.

‘He said the helicopter is basically a hospital-grade outfit and has the on-board facilities and the crew experience to handle a situation where an otherwise fit young man suffers an apparent head injury and cardiac arrest.’

Mr Murcott said when the call never came, he phoned the area dispatcher in Lismore and asked why his crew had not been sent to the scene.

‘He’s probably going to die anyway so we’re not going to send you,’ the dispatcher replied, according to Mr Murcott.

DSC Sheen said Mr Murcott ‘was taken aback by the response and was shocked that an ambulance officer would talk about an incident in those terms’.

He said Mr Murcott expressed his displeasure and disappointment at the response and asked: ‘So, what do we do, just let this one go through to the keeper?’

He said the paramedics then called the heli-base and were advised what to do by Mr Murcott, and Dr Simon Jones.

The inquest heard from medical experts that the lung decompression was an unnecessary procedure for Mr Cook’s injuries.

Mr Murcott had at the time not been interviewed by lawyers who were engaged by NSW Ambulance to take statements from all officers involved in the incident, as per a coroner’s order. 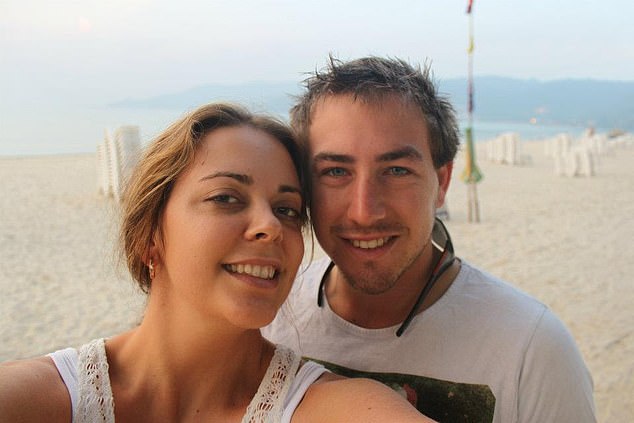 ‘Mr Murcott expressed a desire to provide a statement to me but had some severe reservations about doing so in the presence of any member of any legal team that was engaged by NSW Ambulance Service,’ DSC Sheehan said.

‘He believed the service was in “damage control” and was in his opinion trying to cover up certain aspects of the investigation into the treatment of Mr Cook.’

Mr Cook was playing for the Murwillumbah Mustangs in a Northern Rivers Regional Rugby League semi-final clash against the Casino Cougars.

After taking the hit he came to the sidelines a couple of minutes before half time, then went ‘into some sort of fit or convulsion’.

‘They continued to play because there was only a bit over a minute left in the half and there was no indication it was anything major on the sideline at that stage,’ local league president Brian Rix said at the time.

‘When the halftime break came, we knew then it was quite serious.’

From information provided in the Triple-0 call, NSW Ambulance designated the incident a 1C emergency. 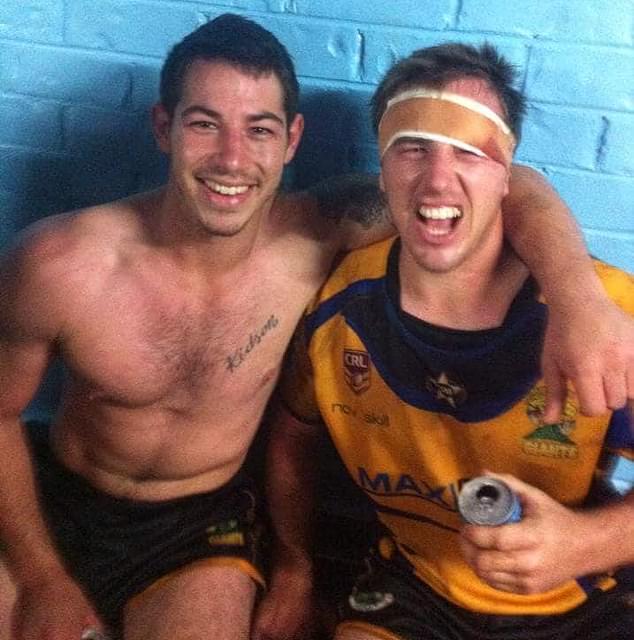 On the way, it was upgraded to the highest 1A when operators were ‘advised in a subsequent call that the patient had gone into cardiac arrest and a doctor had commenced CPR’.

NSW Ambulance admitted at the time 20 minutes was longer than the usual response time for such an emergency.

‘You would hope that when the patient is serious, it would take 10 to 12 minutes for the first resource to arrive,’ it said.

Half of all 1A emergencies in NSW in 2013/14 were responded to within 7.65 minutes, according to ambulance records.

Mr Cook’s father Geoff, who took over his son’s Tweed Growers grocery with his other son Aaron, watched the inquest on video link.

He at the time questioned the time it took for the ambulance to arrive.

‘If they had said, ‘Look, we’re not getting an ambulance to you for 30 minutes’, Grant could have been transported in a car and CPR could have been continued in the back seat and then at a hospital that had the equipment,’ he told 9 News. 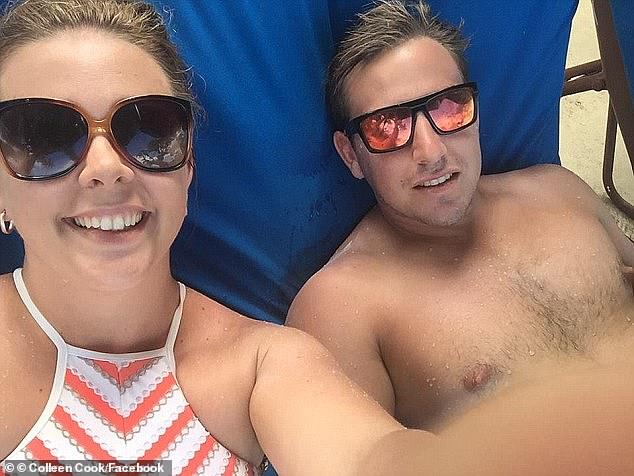 Ms Cook said she was in denial about the severity of her husband’s condition, but knew deep down her wasn’t going to make it

Mr Cook’s wife Colleen gave a heart-wrenching tribute to her late husband in the days after his death.

‘My goodness. Where to start? And what’s the correct way to announce the passing of a husband, son, father, brother, uncle, cousin, teammate and friend so many of us loved,’ she wrote in a Facebook post.

‘My beautiful husband Grant is now an angel watching over us. Life can be so cruel.

‘He has left a huge hole in my heart and I know all family, especially his parents, are hurting trying to understand this tragedy.’

Ms Cook said she was in denial about the severity of her husband’s condition, she knew deep down her wasn’t going to make it.

‘I knew very early the outcome and am slowly accepting that I could not hold and kiss him forever and I had to at some point walk away from him and come home to look after our children, and be there for them when the questions come. And they will.’ she wrote.

‘And it already hurts an immense deal. Walking away down that hospital corridor was one of the hardest things I have ever done.

‘And I’m surprised I made it out with how heavy my legs and heart and body felt.

‘We loved him so much, and he loved us. And I guess this part is what hurts me the most. Him not growing old with me and watching our children hit each milestone.’ 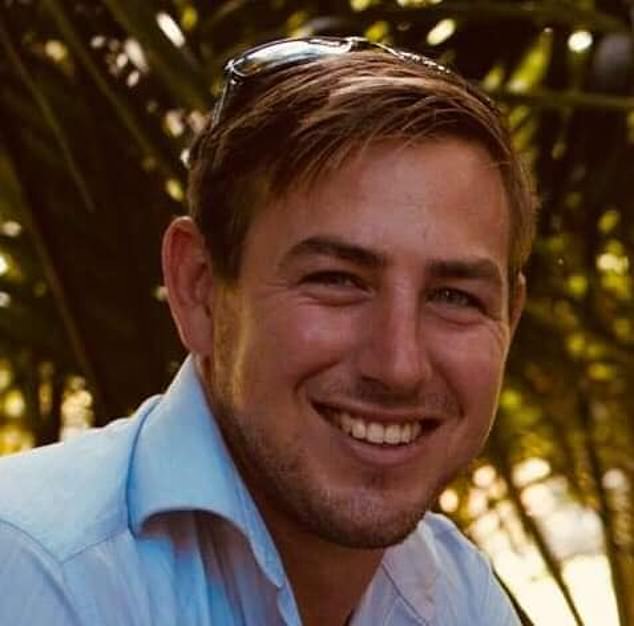 Ms Cook said she was ‘immensely proud’ of her husband, and how much he had achieved while still in his 20s.

‘I do feel immensely proud of Grant. He helped so many, he loved unconditionally, he forgave others and taught me to do the same.

‘He actually taught me many things. And held me together in my darkest days.

‘You died doing something you loved so passionately, and I guess that’s how I have to look at it.’

Mr Cook won Young Entrepreneur of the Year at the 2013 Northern Rivers Business Awards for his grocery business.

He was given a guard of honour by Mustangs players at his funeral and the local league cup is now named after him.