Why Helsinki is a paradise for island-hopping

The Finnish capital is a city of artists, architects and islands. You’ll see scores of the latter beneath your plane as you come in to land. Some are nature reserves, some are naturist reserves – don’t confuse them – and some are home to museums and galleries, part of the world-class line-up of events and institutions that make Helsinki one of Europe’s best, but least shouted-about, cultural destinations.

Next summer the first Helsinki art biennial happens on Vallisaari Island. But you don’t have to wait for your first taste of island life.

A good place to start is Kuusisaari, accessible by bridge and a bus ride from the Kamppi Lahiliikenne terminal in the city centre. The island was thickly forested when the collectors and philanthropists Signe and Ane Gyllenberg built their grand home and gallery here in 1938, and it still feels like parkland. The wooded grounds reach the shore and you’re welcome to bring a picnic and enjoy a paddle.

Back inside, Villa Gyllenberg has regular art shows plus a permanent collection that includes much by Helene Schjerfbeck, the early Finnish 20th Century portrait artist.

Five minutes’ walk away from the villa you’ll find the Didrichsen Art Museum, a split-level, mid-20th Century dream home designed by Viljo Revell for the Finnish collectors Marie-Louise and Gunnar Didrichsen in 1959 with the instruction, clearly, to make it groovy. If Austin Powers were Finnish, this is where he’d live. As well as the fantastically cool drinks cabinet complete with the original 1960s Dubonnet bottles, the internal sunken ponds, teak interiors and original light fittings and stereo, there is an art collection that includes works by Picasso, Chagall, Emil Nolde, Miro, Rothko, Kandinsky and Schjerfbeck.

For those who lean towards the more traditional, back in Helsinki, the Ateneum gallery is a grand European institution with a major collection. Van Gogh and Gauguin are here, alongside 19th Century Finnish golden age painters such as Akseli Gallen-Kallela. The near-perpendicular central staircase should not be attempted if you’ve had anything stronger than coffee. But if you’re ready for a drink, walk through town to Katajanokka island. Cross the footbridge on to the island’s Kanavaranta quayside area directly below the city’s Orthodox cathedral and you’ll find bars and restaurants in converted warehouses facing the water.

If you like Art Nouveau, known as Jugendstil in Finland, then Katajanokka island is an open-air museum of the style. In the early 1900s several great architects, including Eliel Saarinen, were given blocks of apartments to design, and, on streets such as Katajanokankatu and Luotsikatu, you’ll find doorways decorated with bears and figures from mythology.

Saarinen’s masterpiece is Helsinki central station. The four stone giants holding glass globes that stand guard over the facade are embedded in Finnish culture, appearing in movies and songs. 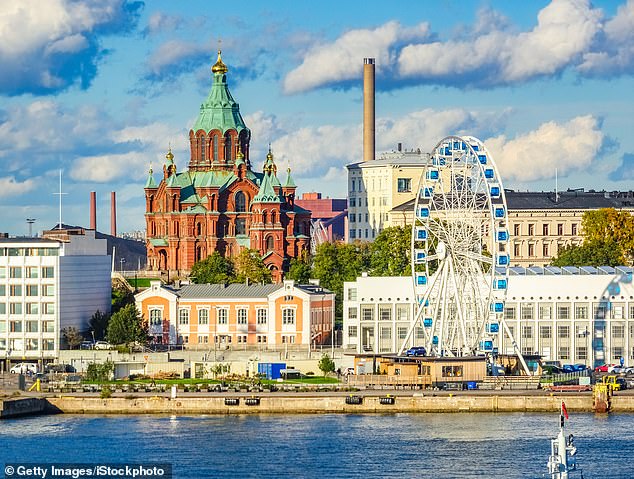 Ready for more islands? Get a bus or ferry to Korkeasaari to see snow leopards and 150 other animals on the island zoo.

Ferries also take you to the ‘sea fortress’ of Suomenlinna, a 150-year-old island garrison that housed anti-aircraft units in the Second World War and is now one of Finland’s most popular tourist attractions.

Or get the train to Karjaa then change for the delightful old-world town of Ekenas, which sits in the Ekenas archipelago national park made up of 4,000 islets that are home to ospreys and eagles. The rail journey should take 50 minutes in all and, before you board, look in the station’s Presidential lounge, which still has Saarinen’s original furniture and fittings.

Flights from Gatwick to Helsinki with Norwegian cost from £231 (www.norwegian.com). Radisson Blu Royal Hotel, Helsinki has standard rooms from £125 per night, not including breakfast (radissonhotels.com).

Ekenas has a wonderful folk museum, which has a permanent collection of Helene Schjerfbeck’s work and a cafe that specialises in robust local food – dishes like ‘salty pie’, which is filled with chopped eggs and, as you’d expect, lots of salt. There are more places to eat along the waterside, such as the new Fyyren restaurant on the pier which specialises in herring in breadcrumbs. Back in Helsinki, explore the immense Hietaniemi cemetery on the edge of the city centre.

Look for the grave of Schjerfbeck as well as the modernist architect Alvar Aalto and Moomins creator Tove Jansson. To squeeze in a museum, walk along Etelainen Rautatiekatu to the Helsinki Art Museum for galleries dedicated to Jansson and Schjerfbeck.

Time for one more island? Lonna (get a ferry from Market Square quayside) is home to a museum that preserves the workings of the anti-Soviet mine operations run from its shores during the Cold War, plus a restaurant, also called Lonna, serving contemporary versions of traditional Helsinki dishes, like whitefish with a flower salad. This is the place to watch the sun set over a vodka – Finnish of course.