Charlotte (pictured) and her now husband were told that the pregnancy was ectopic — rather than growing in the womb, the fertilised egg had lodged in one of her fallopian tubes

Young filmmaker Charlotte Carroll went to hospital writhing in agony, convinced she had a hernia. But as she waited on the trolley, she received surprising news.

‘I was shocked as I wasn’t trying.’

But the joy at the ‘amazing news’ for Charlotte and her now husband, Diego Bivero-Volpe, an entrepreneur, was short-lived.

An hour later, they were told that the pregnancy was ectopic — rather than growing in the womb, the fertilised egg had lodged in one of her fallopian tubes.

An ectopic pregnancy is never viable and can be fatal for a woman, because the tube can rupture as the developing baby grows, causing dramatic blood loss.

‘A nurse told me that I was eight weeks pregnant and that they would most likely have to take out the embryo along with the fallopian tube,’ says Charlotte, who lives with Diego, formerly of TV’s Made In Chelsea, in South-West London.

‘I burst into tears and said: ‘So how am I ever going to have a baby again?’ It was such a sad moment.’

Charlotte was unaware that the lower abdominal pain and vaginal bleeding she had been experiencing were classic warning signs of an ectopic pregnancy.

Nor did she realise that the fact she has endometriosis — where cells similar to those found in the lining of the womb occur elsewhere in the body — doubles her risk of an ectopic pregnancy.

These cells can grow anywhere, including in the pelvis, around the bladder and even in the lungs, causing intense pain. The tissue swells and bleeds each month like the womb lining, but the blood has nowhere to go. Charlotte was 25 when she was told she had endometriosis.

‘I learned that 50 per cent of women with it suffer from fertility issues, but I didn’t know there was an increased chance of an ectopic pregnancy,’ she says. 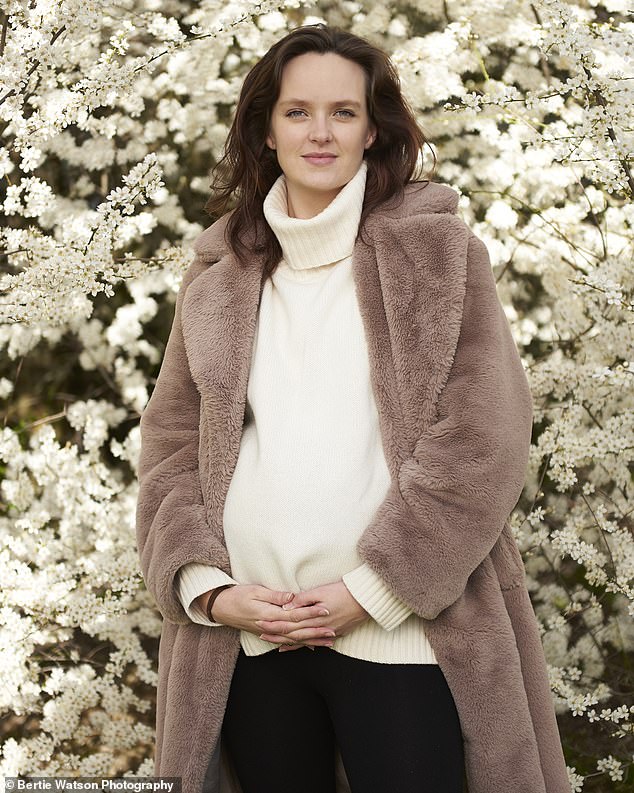 She is telling her story now to give others hope, as she is pregnant again — ‘by accident, like before’ — and her baby is due this month. It is a surprise, as having only one fallopian tube can reduce the chance of getting pregnant, and so does endometriosis

Why it increases this risk is unclear.

‘We know the association, but can’t explain the mechanism,’ says Andrew Horne, a professor of gynaecology and reproductive medicine at Edinburgh University.

There are 11,000 ectopic pregnancies diagnosed in the UK every year. Sometimes an ectopic pregnancy can implant in the spleen, bowel or an old caesarean scar, but 95 per cent embed in one of the fallopian tubes.

Charlotte, who has appeared in films such as Burnt, starring Bradley Cooper, and won awards for her 2017 film Red Crayon, decided to turn the camera on herself while being treated in hospital for her ectopic pregnancy in August 2019.

‘What was happening was so unbelievable and traumatic, I thought maybe I wouldn’t remember it,’ she says. She has now turned the footage into a powerful short film, The Topic.

‘I wanted women to know they’re not alone,’ she says.

During her two-night stay at the Chelsea and Westminster Hospital in London, she had to have the embryo and fallopian tube in which it had implanted removed via a laparoscopy. This is when a tube with a camera on the end is passed in via a small incision in the abdomen.

The whole experience left her feeling ‘destroyed’ and wondering if she should be ‘freezing my eggs or calling adoption agencies’.

She is telling her story now to give others hope, as she is pregnant again — ‘by accident, like before’ — and her baby is due this month.

It is a surprise, as having only one fallopian tube can reduce the chance of getting pregnant, and so does endometriosis.

‘One third to half of women with endometriosis will have problems getting pregnant,’ says Professor Horne.

Charlotte’s happiness was mixed with fear when she found out she was pregnant again. ‘I couldn’t relax until I’d had an early pregnancy scan and it was confirmed that it was in the right place,’ she says

‘Endometriosis may cause problems by changing the environment in the pelvis, making it more inflammatory, so that the pregnancy does not implant properly or the egg quality may not be so good.’

At least 1.5 million women in the UK have this condition — although the charity Endometriosis UK believes the true figure may be higher because awareness remains low and women are embarrassed to seek help for symptoms such as heavy periods.

Women experience symptoms for on average eight years before diagnosis — also partly because endometriosis can be difficult to diagnose, says Professor Horne.

‘Many of the symptoms cross over with other conditions, such as irritable bowel syndrome [painful stomach cramps and bloating], or painful bladder syndrome, which can mimic the pain of women with endometriosis in the bladder,’ he says.

Charlotte lost count of the number of times she went to her GP and was told she was simply experiencing painful periods.

‘I went on the contraceptive pill at 15 and felt it was time to come off when I was 20,’ she says.

‘I didn’t know at the time, but the Pill suppresses symptoms of endometriosis because it inhibits ovulation and stops the growth and shedding of the endometrial lining of the womb.

‘When I came off the Pill, my periods got so painful that I couldn’t cope. It was impossible to stand up or talk.

‘My GP gave me powerful prescription painkillers such as diclofenac, but she never mentioned endometriosis. She just said I was having painful periods.

‘The pain would come on 12 hours before the period. It felt like barbed wire and made me nauseous.’

When Charlotte was 23, her GP referred her to a gynaecologist, who eventually performed a laparoscopy — this found areas of endometrial tissue on the left side of her abdomen, which were lasered off.

‘It was a relief knowing what was wrong, but I felt silly, even angry, that it hadn’t been dealt with before,’ says Charlotte.

‘I never had some of the classic symptoms, such as pain during sex or bowel movements, but after the surgical treatment, the pain during my periods stopped.’

Three years later, in 2019, however, the pain returned.

Laparoscopy is the most common way to diagnose endometriosis, and while the tissue is often cut out during the procedure, it usually recurs.

‘In 20 per cent of women, symptoms come back in two years, and in 50 per cent, within five years,’ says Professor Horne. Female hormones encourage endometrial tissue to regrow.

This month, Professor Horne is launching a study involving 400 women undergoing laparoscopies to see if it is better to remove the tissue at the same time, or opt for medical management instead.

Typically, the condition is treated with hormonal drugs such as the combined contraceptive pill, but these are not suitable for women wanting to become pregnant.

Meanwhile, work is ongoing to understand the cause of endometriosis. ‘The theory we work on in Edinburgh is based on retrograde menstruation,’ says Professor Horne.

‘This is when menstrual blood containing endometrial cells flows back up the fallopian tubes into the pelvis, instead of passing out of the body. That happens in 80 per cent to 90 per cent of endometriosis patients, so we have been looking at why in some that tissue seems to stick to the lining of the womb, as it should, but not in others.’

Professor Jason Abbott, a gynaecologist and obstetrician at the University of New South Wales in Australia, believes some cases are caused by a ‘pain syndrome’ whereby the brain learns to experience pain even after the tissue has been removed.

Charlotte’s happiness was mixed with fear when she found out she was pregnant again.

‘I couldn’t relax until I’d had an early pregnancy scan and it was confirmed that it was in the right place,’ she says.

‘I want to inspire hope in other women struggling with endometriosis, who will see that a successful pregnancy is possible.’

You can see Charlotte’s film at thetopic.co.uk

People with Alzheimer’s have a different mix of gut bacteria, and now scientists from Italy and Switzerland may have identified the significance of this.

When they compared brain scans and blood samples they found that patients with the disease had high levels of proteins produced by certain gut bacteria.

Furthermore, Alzheimer’s is characterised by amyloid plaques in the brain and the study, published in the Journal of Alzheimer’s Disease, showed that people with the largest plaques had the highest levels of these proteins.

‘This research seems to suggest that abnormalities in gut microbiota activity in those with Alzheimer’s disease contributes to the development of amyloid plaques,’ says Lynne Barker, an associate professor of cognitive neuroscience at Sheffield Hallam University.

‘It is known that gut and brain are intimately connected — what we are beginning to learn is what functions the microbial community in our gut performs.’