My four-year-old daughter and I have just been for our Sunday morning swim and now we are in Starbucks queuing for a bacon roll, the well-earned post-pool treat we are careful never to tell Mummy about.

Phoebe’s chattering away, and a woman ahead of us turns round. She looks at me, and at Phoebe, smiles sweetly and says: ‘Is your grandad spoiling you, young lady?’

Phoebe glowers at her and says: ‘He’s not my grandad, he’s my daddy.’ Mortification is a difficult expression to describe, but you know it when you see it and, since becoming a father again at 58, I see it quite a lot.

‘I’m only 26,’ I mutter, in a half-hearted attempt to ease her embarrassment. ‘But I’ve had a lot of worry.’

In fact, I’m now 62. I have a son, Adam, who was born when I really was 26. He’s 37 now, with two sons of his own, which means I am now simultaneously Daddy and Grandad Jonny. And that Phoebe, four, is auntie to two boys aged 10 and 11. Modern families.

Jonathan Gornall, 62, (pictured right with Phoebe as a baby and with his son Adam, two grandsons and Kate) revealed how his outlook on fatherhood has changed since becoming a father for the second time at age 58. He had his first child, Adam (pictured right) when he was age 26 and is now simultaneously a dad and granddad

Phoebe was no accident. Her mother and I got together in 2011, were married in 2012 and suddenly it seemed perverse not to have a child. Kate, approaching 40, was still young enough. Men, of course, can have children at pretty much any age. But after four years as Daddy MkII, I’m not entirely sure they should.

Thirty-seven years ago, when Adam was born, I may technically have been an adult, but I had not set aside childish ways. I was vain and selfish and utterly convinced the universe orbited around me. Always on the lookout for adventures, I should never have got married, let alone fathered a child, and it surprised no one when Adam’s mother and I split up.

She and Adam moved abroad, which at the time felt like a liberation. At some point in the 37 years since Adam was born I must finally have grown up, because from the moment I first saw Phoebe the thought of not seeing her for even a single day was inconceivable. And the thought of having turned my back on my two-year-old son years ago filled me with shame and regret.

Remarkably, Adam and I are closer now than ever. It’s not that he’s forgiven me, more like it’s never crossed his mind that he has anything to forgive. I can’t take credit for his incredible strength of character. That belongs to his mother and to the Royal Marines.

Adam came to live with me in the UK when he was 15 and one day announced he was going to join up.

I was horrified, and immeasurably proud the day he received his green beret. These days he works abroad a lot but when we do spend time together as a family, with Auntie Phoebe bossing his boys around, I feel like the luckiest man alive.

There are, of course, physical differences between 26-year-old and 62-year-old me. Over 37 years, girth inevitably expands and hair recedes. Skin wrinkles and muscles that once responded eagerly to the demands of marathon running and ocean rowing are far happier taking the occasional leisurely stroll — which is tough because, as any parent knows, there is nothing leisurely about raising a four-year-old.

So I’m still running, swimming and hitting the gym, no longer in a bid to buff up for the beach, but to stay in some kind of shape for as long as possible, so I can cope with the physical demands of parenting. 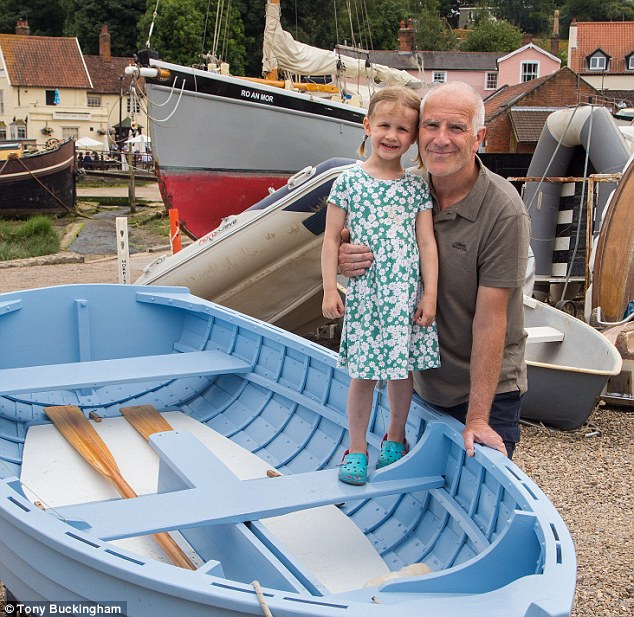 Jonathan (pictured with his daughter Phoebe as a boatyard) married his second wife and had Phoebe two years after he underwent a multiple coronary artery bypass in Dubai. He claims the touch-and-go operation gave him a second chance and revised his outlook on life

Heaving an increasingly heavy Phoebe on to my shoulders and carrying her home when she tires of walking is a workout all by itself. But if I am having to put far more effort into being physically suited to fatherhood than I ever had to at 26, psychologically I am in my prime.

It may have helped that in February 2012, two years before Phoebe was born, I underwent a multiple coronary artery bypass in Dubai, where I was working as a journalist. So much for not smoking, eating and drinking sensibly.

None of it, it seems, had been sufficient to defuse the ticking time-bomb of familial hyper-cholesterolaemia, a genetic defect that had been coating my arteries with gunk.

Emerging from the touch-and-go operation to find myself unexpectedly alive was to be born again. I had been given a second chance and, more importantly, a revised outlook on life. I wasn’t going to waste it on frivolous self-obsession. Marriage, and Phoebe, followed in short order.

How old is the average UK father?

One former partner, disappointed at my lack of commitment, told me I didn’t know what love was. She was, I think, right. But now I did.

True love, as it turns out, is about not only being prepared to live your life for the benefit of someone else, but actively wanting to do so. When I was young, I was simply unable, or unwilling, to see this. Life was all about me. Many women, I guess, will recognise this in many men.

When other people came into my orbit, my interest in them was limited to what they could do for me — as friends, or lovers.

I see younger couples, who had their children at the same time as me and Kate, labouring under the misapprehension that their life is still all about them, and trying to fit their children in around the same plans they made when they were childless.

I’m old enough and wise enough to keep my mouth shut, but I want to tell them what I wish someone had told me when I was their age. Let it go. You’re parents now. It’s no longer about you. You will get so much more out of it. And this isn’t about self-sacrifice, a state of mind which inevitably comes bundled with resentment. 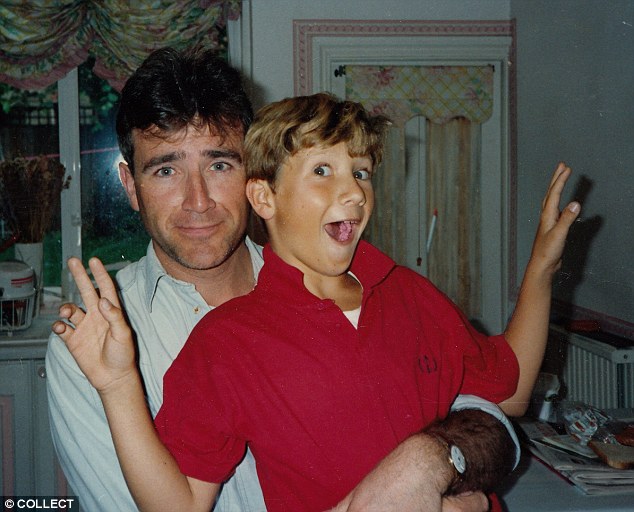 Yes, keeping up with the fast-moving whims, emotions and the sheer physical energy of a dynamic four-year-old can be utterly exhausting.

But — and at the risk of sounding like a walking cliche — every ounce of effort invested in Phoebe yields a ton of joy.

OK, of course we have our moments. She is, after all, only four and I am, after all, only human. But I end each day with a heart full of unexpected magical moments unlike any that I have ever experienced before.

Collecting her from nursery, watching for a while as she plays, oblivious to my presence, with her friends, and then seeing her face light up as she spots her daddy and sprints towards me, arms outstretched.

Reading her bedtime stories, willingly tricked into reading not two, or even three of the library books she has chosen with mummy, but often four, and admiring her negotiating skills.

Taking her swimming, watching her find the courage to swim underwater for the first time and witnessing her sheer joy as she surfaces triumphant, challenge overcome, and sharing her victory in a boisterous hug.

Sitting in her little pale blue boat, watching her push down the daggerboard as we sail away from the pontoon, already at home on the water. So about that boat, the traditional clinker-built wooden sailing dinghy I’ve just spent more than a year building for her in a farmer’s shed near our Suffolk home. 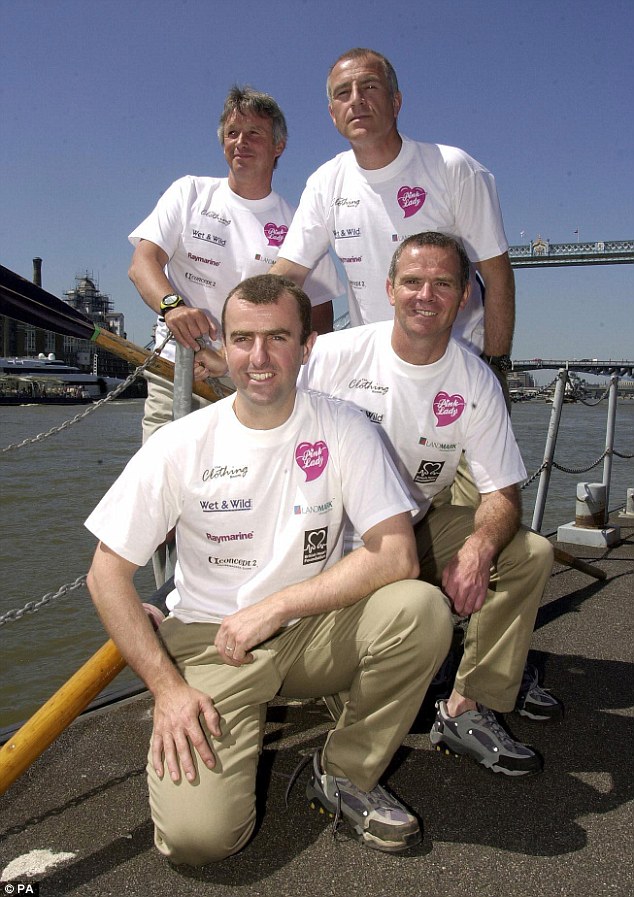 The tale of my frankly bonkers decision to build Phoebe a classic boat is the subject of my memoir, How To Build A Boat. The idea came to me one sleepless night, pacing up and down with my daughter in my arms and thoughts of her future — and my chance of playing much of a part in it — in my mind.

Given a lack of the appropriate skills and experience, to say nothing of the necessary tools, it was at best a quixotic decision. But even in the cold light of the following day it still seemed to make a sort of sense.

I’d never done anything like this for Adam, but in a way, this was for him as well.

The most remarkable thing I ever did for my son was send him souvenirs from my travels in South America — a bow and arrow, a dried piranha, a photograph of daddy having a great time thousands of miles away . . .

It was also for me. Somehow I needed tangible evidence that I could be a good father. And, not unlike fatherhood at my age, it proved to be an unbelievably difficult task that would test me to extremes, but that, of course, was partly the point.

I have always loved the sea, sworn ally of imagination and unfailing antidote to the narrow pathways of the land. What better way to introduce my daughter to this special place than through the gift of a boat?

In many ways, Phoebe has picked a good time to be born a woman, but it’s a time not without its challenges. 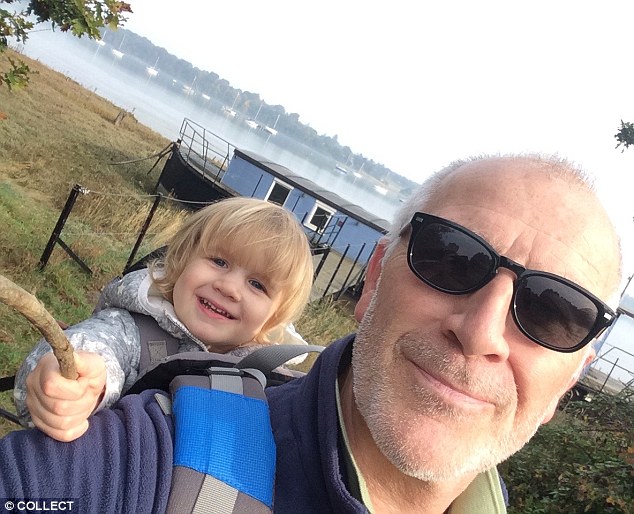 Recently, the National Children’s Bureau revealed that a quarter of teenage girls suffered symptoms of depression, a shocking state of affairs not unrelated to the relentless pressure imposed on them by the tyranny of social media.

Given a choice between some vacuous, surgically enhanced Instagram ‘star’ and someone like 25-year-old Nikki Henderson, who on July 28 became the youngest ever skipper to complete the 40,000-mile Clipper Round The World Yacht Race, I know which female role model I hope will inspire my daughter.

Now 62, and the proud owner of a scar running from below my neck down to my sternum, I am realistic about my chances of being around long enough to help Kate to pilot Phoebe all the way into adulthood.

The gift of a boat, infused with her daddy’s love, sweat and blood, will, I hope, remind her not only of how much I loved her, but also that success need not be defined only by fame or fortune, the narrow parameters of our shallow, digital age.

From time to time, the little boat might whisper to her, it is not only permissible but also vital to do things solely for their own sake, and to attempt to achieve things that appear unachievable. That, along with the observation from The Wind In The Willows’s Ratty that ‘there is nothing — absolutely nothing — half so much worth doing as simply messing about in boats’, is my gift to her.

Phoebe’s gift to me is the revelation that, no matter how much fun I thought I was having when I was self-centredly footloose and fancy free, there is nothing as fulfilling and liberating as living my life for the child I chose to bring into the world.

I wish I’d figured that out 37 years ago.