Why I’m looking east for my vision of post-Brexit prosperity, writes JEREMY HUNT

Jeremy Hunt: When Singapore became an independent country in 1965, its leaders described it as the moment it ‘plugged into the international economic grid’

When Singapore became an independent country in 1965, its leaders described it as the moment it ‘plugged into the international economic grid’.

While the circumstances of Britain’s departure from the EU are different, there could be few better instructions for us as we make our post-Brexit future.

So this year I will skip the last of the turkey sandwiches to fly east and strengthen Britain’s links with some of the most dynamic economies of the world.

The remarkable transformation of Singapore, from a tiny territory devoid of natural resources into the world’s eighth-richest country, is a reminder of the tidal shifts that can exist within the ebb and flow of the changing world order.

Almost exactly 200 years ago a British adventurer, Sir Stamford Raffles, stepped ashore to found what would become a free port and a modern city. Our connection with the people of this part of the world has never wavered, even as our role in the world has changed.

We may no longer be a superpower but we are still very much a global power. In my short time as Foreign Secretary, I have been constantly struck by how much more other countries respect us than we seem to respect ourselves.

I travel to Asia as the Foreign Minister of the fifth-largest economy in the world, with the third-biggest overseas aid budget, the second-biggest military budget in Nato, and one of the globe’s two big financial centres.

Even more importantly, in a world where it is rarely possible for one country to achieve its ambitions alone, we have some of the best global connections – whether through the large numbers of international students and tourists we benefit from, our ownership of the world’s language, membership of the Commonwealth, a strong alliance with the United States or our friendship with neighbours in Europe.

Even within their own families British people share unique links which combine with centuries of trade routes, military campaigns and missionary work that make us one of the best-connected countries on the planet.

All these strengths and relationships are underpinned by a set of core values: decency, stability, fairness and democracy. Our role post-Brexit is to build links with other countries who share those values so we build an invisible chain of democracies, countries that are strong and confident in what we believe in up against those who would seek to undermine us.

And as we promote our values abroad, so we must apply them as we tackle challenges at home.

The priority for the first few weeks of the New Year will, of course, be Brexit. I’ve watched first-hand as the Prime Minister has battled with Brussels to deliver a good deal for the country. It is testament to her tenacity that we have a deal on the table that many said would be impossible to strike. All that remains is the need for reassurance that the Northern Irish backstop cannot be used to keep us tied to the customs union against our will. 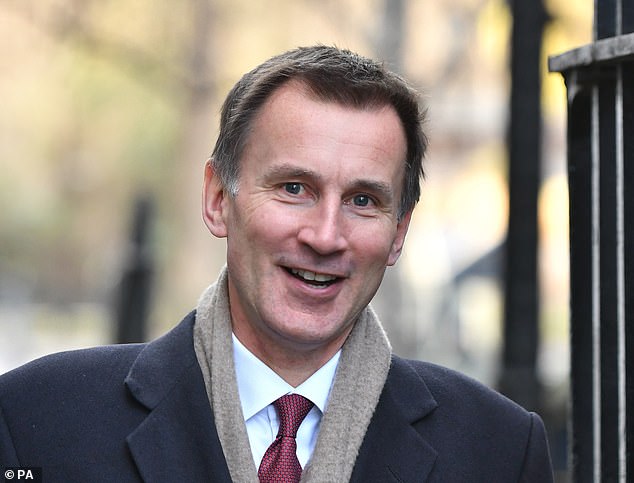 The priority for the first few weeks of the New Year will, of course, be Brexit, writes Mr Hunt

SO those of us who wish to complete Britain’s orderly departure from the EU have a simple task: to stand behind the PM as she finalises the details of the backstop and back her to get the deal through Parliament.

Yes, it’s true that no negotiation ever produced an outcome that was perfect for all sides, and this deal is no different. So it is always alluring to reach for alternatives. But in this case other options are fraught with danger.

It’s the equivalent of saying to the public: you created the problem by voting to leave, now over to you to fix it. But at the last Election the overwhelming majority of people voted for parties that said they would leave the EU – so a second vote would mean ducking the consequences of that promise made not just by the Conservatives but by Labour as well.

Jeremy Corbyn might be comfortable with such a dereliction of duty, but not Theresa May.

Even if you could work out what the question on the ballot paper would be (no mean feat), a second vote would divide the country again right at the moment when people need to come together. And who could blame the losing side in a second referendum for asking for a third?

If a second referendum fails the most basic test of delivering what the people voted for, the other extreme – walking away without a deal – would present risks to business and jobs even if you believe in the end we would find a way through it to survive and prosper. No one should be encouraging a move that could leave us poorer at the same time as gladdening the hearts of those who wish for a fractured Europe.

This deal delivers what the people voted for – control of our borders, our money and our laws – and will allow the country to move on to the next challenge, namely negotiating a trade deal that gives us an independent ability to plough our furrow in the world.

In Asia this week I will sit down with those most eager to strengthen their links with Britain once we have left the European Union. Let’s not let them down.