Inheritance tax is one that Britons love to grumble about and the Office of Tax Simplification’s probe into it was as close to damning as such reports get.

It outlined a confusing system, where more than ten times as many people have to fill in forms as deaths incur the tax.

Meanwhile, the wealthiest estates pay a smaller proportion in inheritance tax than those below them and bag a much bigger share of exemptions.

It says a lot that the summary of how inheritance tax works only just about fits onto one page (and that’s by excluding much of the detail).

If you were going to design a tax from scratch, which would work well and be considered fair, this is not what it would look like.

The OTS notes that a YouGov poll in 2015 found that inheritance tax was seen as the most unfair of 11 major taxes, with 59 per cent considering it ‘unfair’ and just 22 per cent ‘fair’. That comes despite just 5 per cent of deaths each year being hit by it.

Inheritance tax is charged at 40 per cent above a tax-free level of £325,000 for estates, known as the nil rate band.

However, married couples and civil partners can pass their unused nil rate band on to the surviving partner on death, effectively doubling the tax-free amount to £650,000.

A new residence nil rate band for homes passed on to direct descendants is also being introduced, which currently stands at £125,000 and is on its way to £175,000 by April 2020.

Money and assets given away more than seven years before death are usually considered exempt, while there are also other reliefs including a £3,000 annual gifting amount.

This part of the OTS’s probe into inheritance tax concerns its administration, rather than how it should be changed.

Nonetheless, it makes for interesting reading.

Firstly, it highlights how the system is a major burden.

Yet, inheritance tax forms had to be completed by executors for 275,000 estates in 2015 to 2016, because the estate must be reported to HMRC, even where it’s obvious there is no tax liability.

I had the misfortune of going through this rigmarole after my dad died almost five years ago.

I had to fill in reams of forms, despite him having left everything to my mum and thus there being no tax to pay.

Such instances were a major concern aired by the OTS report. 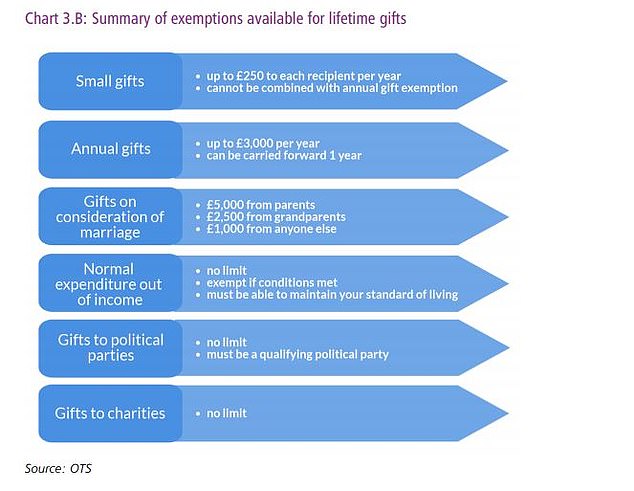 One major complaint about inheritance tax is that the exempt amounts for gifts have not risen with inflation, whether that is the £3,000 annual gifting allowance of the £5,000 wedding one

It also flagged problems in how inheritance tax is constructed and hits.

The exemptions are confusing, ranging from nil rate bands and the new own home allowance, to the seven-year rule on money and assets being given away – after this time period they are usually exempt from IHT.

The reliefs on offer to normal people have also failed to rise with inflation. For example, an individual is only allowed to give away £3,000 per year, so buy your son or daughter a second hand Ford Fiesta and then have the misfortune to die within seven years and the taxman may come knocking.

There is a common perception that the really rich manage to sidestep inheritance tax and there might be something in that.

The OTS highlights that while it is clearly paid by the wealthier end of society, the rate as a proportion of the total estate rises up to the £2million to £3million bracket and then plateaus, before steadily falling after about £7million.

Another chart shows how the very rich grab a big chunk of exemptions – this is the level at where keeping money elsewhere and buying businesses, woodland and farmland kicks in.

By the time you get to estates worth £10million or more, more than 70 per cent of the net estate is covered by some form of inheritance tax relief. 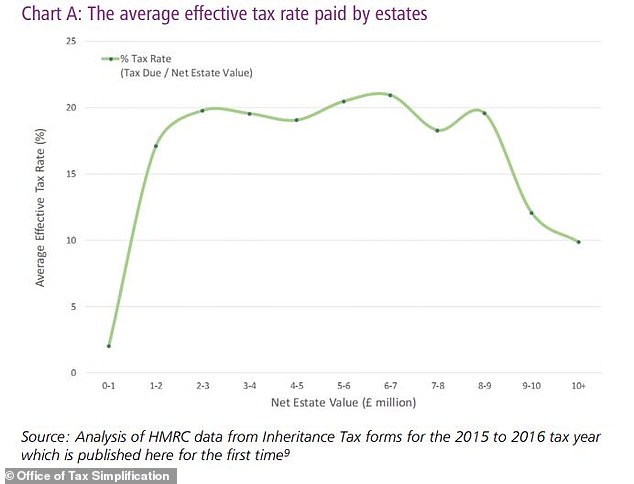 The effective tax paid on estates is considerably below 40% as it is measured against total estate value, with the nil rate band and ability to leave assets IHT-free to spouses pulling the percentage down. However, while the rate rises with wealth, it then plateaus and starts falling for the very richest 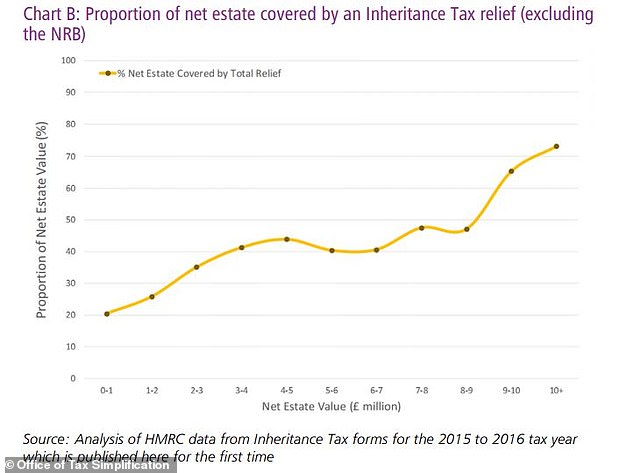 This OTS chart shows how the proportion of an estate that gets a relief rises with its value. The £10million-plus estates manage to get relief for more than 70% of their value

The OTS explains that lower value estates mostly consist of cash and residential property which do not commonly attract reliefs and are relied upon to live and fund peoples’ everyday lives.

It adds: ‘As estates increase in value, they have proportionately less cash and residential property, and more securities and “other assets”. These categories of assets include those that commonly attract relief from Inheritance Tax.’

Among these it includes unlisted shares and AIM shares qualifying for business property relief and farms.

You have to wonder whether a tax structure that annoys people so much is worth pursuing, particularly when it makes up less than 1 per cent of the UK’s annual tax take.

It seems ripe for change and my argument has long been that the best way to do this is to cut the rate from 40 per cent to 20 per cent. This makes it much more palatable, taking it from ‘nearly half’ in people’s minds to ‘not that much’ and reduces the incentive to avoid it.

The overall take may not even fall by that much, as we might find more of those very high value estates paying up. 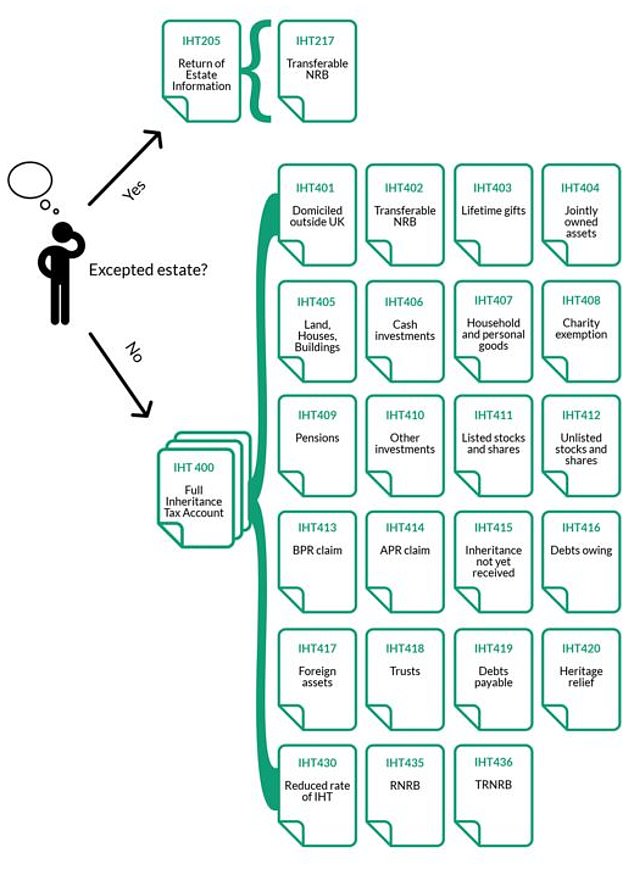