Why is it only the Britons who stockpile?

So why is it only the Britons who stockpile? No panic buying in France, Spain, Italy and Germany where shelves are full of fresh food, pasta and toilet roll despite coronavirus

While British shops are stripped bare by panic buyers, stores on the Continent are full of fresh food, pasta and toilet roll.

Supermarkets in virus-hit Italy, France, Spain and Germany have been limiting how many people can enter at one time.

In France, one British expat told how a maximum spend of 100 euros had been introduced and was helping to keep supplies plentiful.

The shopper said: ‘No panic buying. People are very calm and polite. No shortages of essentials and plenty of loo roll.’

In the city of Lyon, journalist Rosie Wright said: ‘Shoppers are one metre apart, it’s calm, no queues and plenty of food. Seems to be a different picture in the UK, who haven’t got the restrictions.’ 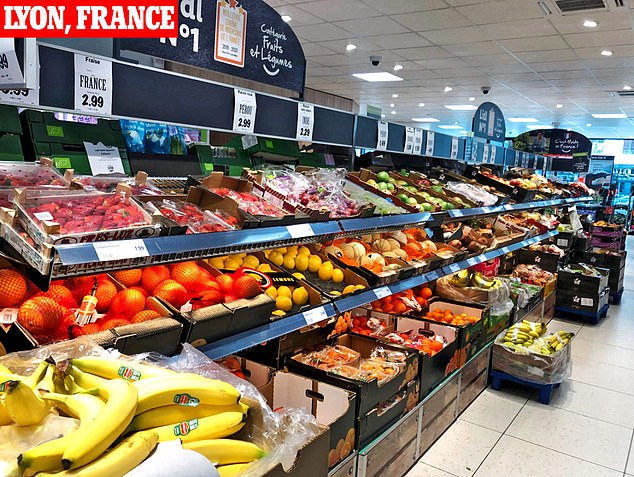 In France, a maximum spend of 100 euros had been introduced and is helping to keep supplies plentiful according to one British Expat who took this photo of shelves full of fruit and veg

In parts of Italy, customers can visit a supermarket only every 48 hours and must stand three metres apart.

Stores in Rome have been operating quota systems for shoppers with ‘one-in, one-out’ entry, leading to queues of up to two hours.

Referring to the panic buying of loo paper in the UK, British expat Alison McKinley joked on Facebook: ‘We can’t leave home here in Milan except to visit the supermarket which we do daily just to admire all the lovely toilet roll.’

‘In Spain, customers must enter supermarkets alone and store managers monitor how many people are in the shop. 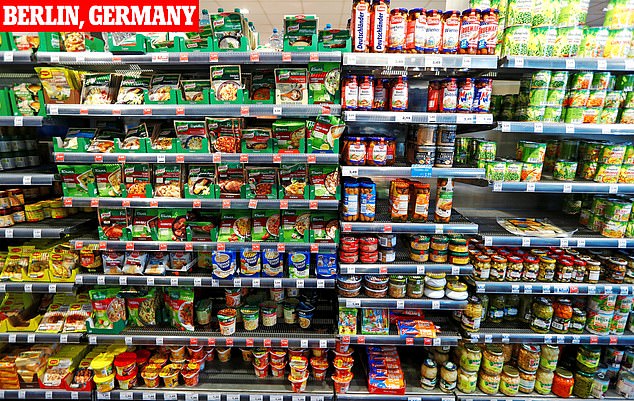 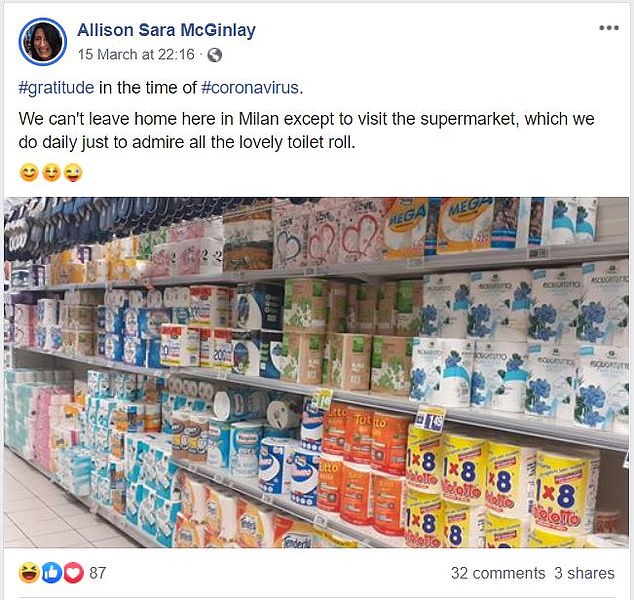 ‘If it gets too busy, customers are made to wait outside.’

Mercado, a major Spanish chain, has hired private security guards to make sure its rules are followed.

In Lanzarote, British businesswoman Rachel Hammond, 31, said only one person from each household was allowed out once per day to visit a supermarket.

German supermarkets have issued posters stating the maximum number of people who can enter the store and closing the door when the limit is reached.

Nelson Blackley, retail research associate at Nottingham Business School, said: ‘A number of underlying factors will drive the spending down. Many consumers have lower fixed incomes.

‘Many people live in houses where there’s not a significant amount of storage space. And all supermarkets are introducing various forms of rationing.’