Holland are back at the World Cup and, with a team littered with stars and exciting young prospects, they are confident of making an impact in Qatar.

The Dutch were left red faced when they missed out on Russia 2018 by finishing third in their qualifying group behind eventual champions France and Sweden.

But this time around they had no difficulty in getting to Qatar, winning seven of their 10 matches to finish top of their group.

And who better to lead them in the Middle East? Louis van Gaal will be responsible for guiding the Oranje in Qatar – having previously lead them to a third-place finish at Brazil in 2014.

So, why is it so great to see Holland back in the World Cup? Well, there are a number of reasons and Sportsmail have rounded them up below.

Holland are back at the World Cup, having embarrassingly missed out on the 2018 tournament 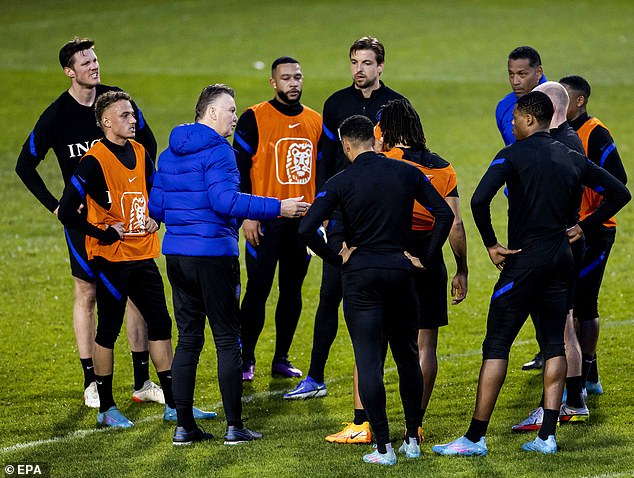 Louis van Gaal is back

Van Gaal came out of retirement after four-and-a-half years to take charge of the Dutch side in the build-up to the 2022 World Cup.

He arrived as the replacement for Frank de Boer, who quickly left his post after losing to the Czech Republic in the last-16 of Euro 2020.

The 71-year-old, now in his third stint with the national team, successfully navigated the qualification stages and is now focused on the showpiece event.

Football fans around the world will be routing for Van Gaal on one level or another.

The 71-year-old has not only had a storied managerial career, he has also been battling with an aggressive form of prostate cancer.

However, we wouldn’t surprised if he also captured the attention of the fans through his off-pitch antics. 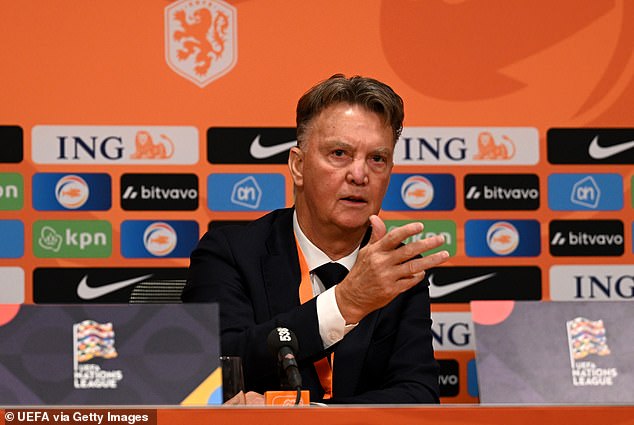 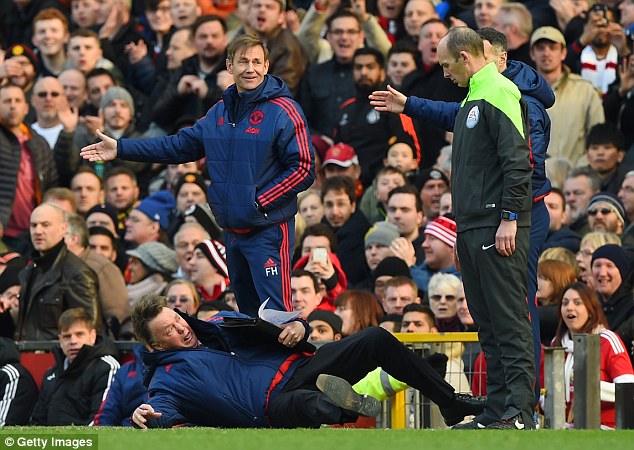 The Dutch manager once made the headlines for hurling himself to the ground after a discussion with fourth official, Mike Dean, during Manchester United’s game with Arsenal in 2016.

Unhappy at the perceived theatrics of Arsenal’s Alexis Sanchez, the United boss made his feelings clear to Dean by mocking his actions on the touchline.

His colourful protest drew an enormous cheer from United fans, and even a sporadic and rare outburst of ‘Louis Van Gaal’s red and white army’ from the Stretford End.

Van Gaal also made headlines for jokingly slapping a journalist in the face, poking himself in the eye with a pencil, getting his player’s names wrong and pretending to tug a reporter’s hair.

Therefore, we are bound to see some hilarious moments during Holland’s World Cup campaign in Qatar next month.

A squad littered with stars and wonderkids

Virgil van Dijk has established himself as one of the best defenders in the world after excelling on the domestic and international stage.

However, he has struggled to implement his usual dominance at Liverpool this season as Jurgen Klopp’s side continue to struggle for form.

Liverpool have only recorded four clean sheets this season, despite the fact Van Dijk has started in every match. Therefore, the Dutch defender has come under fire. 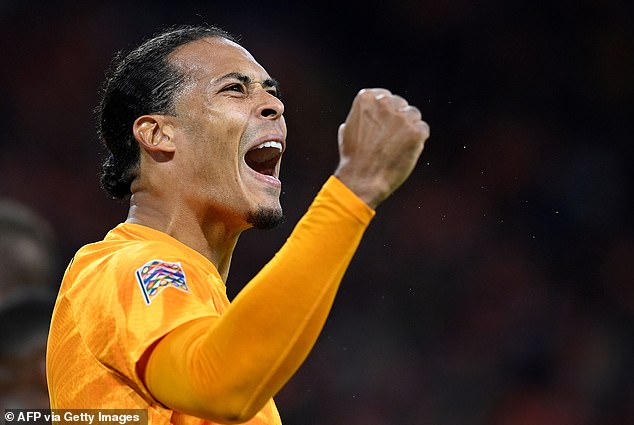 Nevertheless, Van Dijk’s reputation alone is enough to instill fear into Holland’s opponents. He is known for being a backline powerhouse that can stop even the trickiest strikers.

Therefore, he will keep other nations ‘honest’ and make fixtures more competitive once Holland (hopefully) get out of the group.

That being said, Van Dijk must balance the responsibility of being the Holland captain with his own performance on the pitch.

He said: ‘I know I could have done better in the beginning of the season. I’m not naive about that. I know very well when I make mistakes. I also know that I am one of the important players at the club and of course also here at the national team. I feel that responsibility.

‘Mentally it’s a challenge. You feel a lot of pressure on your head. A lot of people forget that too, it’s not easy to do that. We all try to show our best and if, in my case, you are one of the mainstays at the club, then you get the criticism you deserve. You have to deal with that and that is not always easy. But I did that just fine.’ 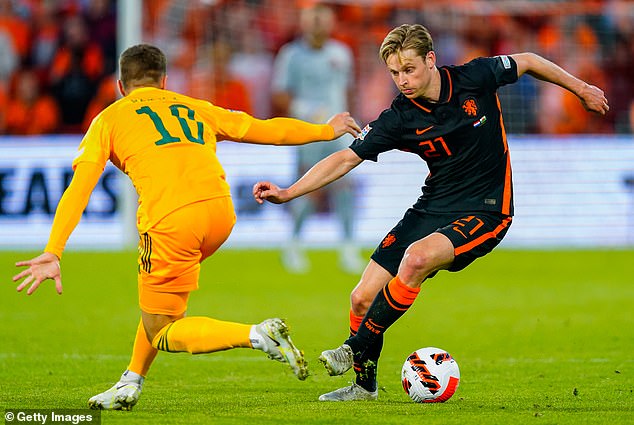 Meanwhile, Frenkie de Jong will be eager to prove his worth at the World Cup after struggling to cement his place in the Barcelona team.

The 25-year-old is said to be furious that Xavi has left him on the bench for Barca’s high-profile Champions League matches against Bayern Munich and Inter Milan, as well as LaLiga games against Sevilla, Rayo Vallecano and Celta Vigo.

De Jong has previously said he is at his best when he is ‘the first player to receive the ball from the defence and link with the attack’. There is scope for him to play that role while away on international duty.

Additionally, Holland defender Tyrell Malacia has the potential to thrive at the 2022 World Cup.

Malacia has shown great defensive energy and is more than capable of keeping up with Erik ten Hag’s demands at Manchester United. Therefore, he could bring a new level of intensity to the Dutch backline. 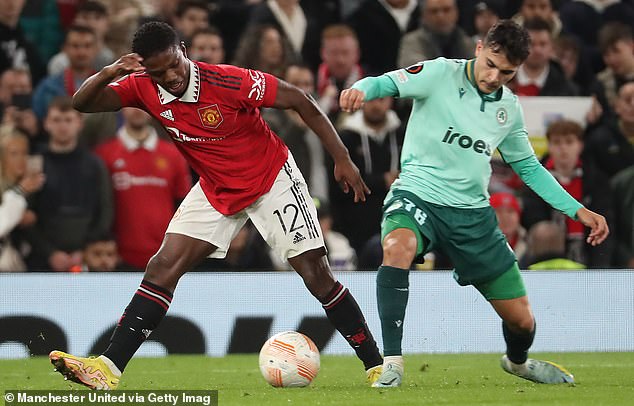 The 19-year-old, who recently made his debut for the Netherlands U21s, could become an international goal scorer after excelling with PSV this season – finding the back of the net eight times already.

There is also Cody Gakpo, who every elite European club seems to keeping an eye on, and midfield sensation Ryan Gravenberch – who left Ajax for Bayern Munich in the summer.

It will also be interesting to see how other young talents like Brian Brobbey, Jurrien Timber, Jeremie Frimpong and Kenneth Taylor cope on the world’s biggest stage.

The World Cup is the most exciting tournament in the football calendar.

It’s a time when football fans all over the globe gather together to watch their country battle it out with others for the biggest bragging rights on offer.

The fans are what makes tournaments like this so special and the Dutch supporters – typically dressed head-to-toe in orange – always make for a vibrant spectacle. 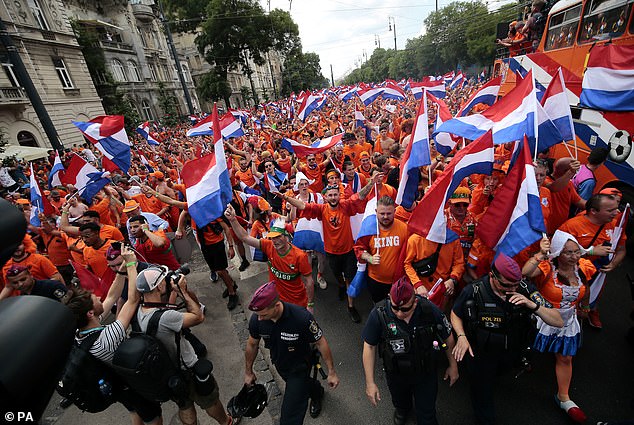 The Dutch football team is known as ‘Oranje’ – which (surprise, surprise) translates to the colour orange.

Therefore, you can expect to see a wave of orange taking over Qatar when the tournament kicks off next month. Holland’s official tourism board have already began joking about their presence during the tournament.

They wrote the following on their official website: ‘During the European and World Championships people tend to get the orange fever.

‘This fever is extremely contagious and the moment that you’re infected it will not wear off until days after the Championship has ended. 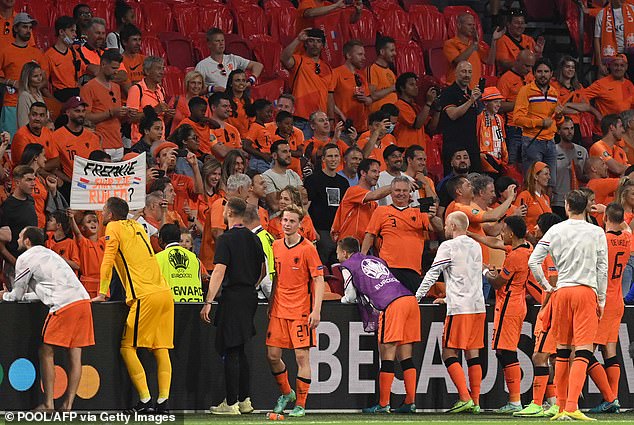 ‘Symptoms of infected areas are bars, shops, houses and offices that have decorated the total in- and outside with orange flags and posters. Sometimes even walls are painted orange.

‘Cars usually get at least one Dutch or orange flag. People with the orange fever are easily recognized by their outfits and behavior: orange and outgoing. The most crazy costumes and gadgets are designed for these times of the year.

‘Luckily the orange fever is a very healthy fever. It lifts the spirit and is a fantastic way of getting to know people. People in orange celebrate together in every part of the country. Holland in the final of the World Cup means the atmosphere is sensational.’ 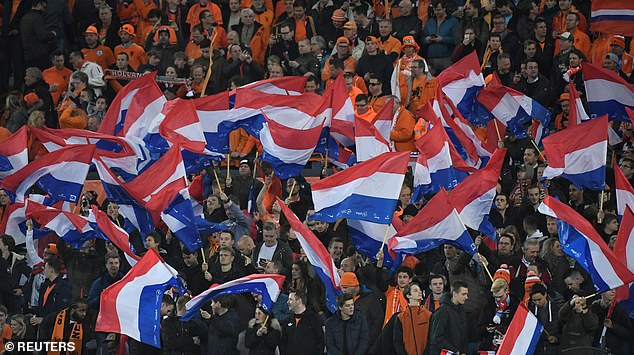 Who are they playing?

The Dutch have been drawn in Group A, which makes things interesting for two reasons.

The first is that their opening match is against Senegal on just day two of the tournament.

The prospect of Sadio Mane lining up against Van Dijk is more than enough to whet the appetite of football fans.

Secondly, they will also take on Qatar during the group stage. Holland will hope to be through by the time the meet the hosts in their third and final group game but still, it will be a real test for the minnows.

Without tempting fate, Holland will play either the winners of runners-up of Group B if they progress from their group.

And who could that be? Let’s just say a mouthwatering England vs Holland last-16 clash on the weekend of December 3/4 is on the cards.