Why Limassol in Cyprus has become a holiday hotspot

The glass of chilled Cypriot white wine was slid across the wooden table with a knowing smile. Towering over the counter with both hands stretched out, the bear-like winemaker waited while I took a sip.

Anticipating it to be sweet and sickly, I smiled politely and drank — only to discover something light, dry and, well, rather delicious.

Clearly delighted by my reaction, Charis —pronounced Harry — pulled out another six bottles, with a story to tell about each, plus olives, halloumi and bread.

Soaking up the sun: Limassol beach on the south coast of Cyprus

This was Gerolemo, a boutique winery in the pretty Troodos mountains above Limassol, on the south coast of Cyprus, where visitors are treated to small-scale, bespoke wine tastings.

‘We only make this to drink in Cyprus,’ Charis explained. ‘You have to come here to try it. We’d far rather focus on local grapes and produce less, which is better.’

And it is this search for quality that Limassol and the surrounding area has spent the past few years frantically focusing on — a far cry from the mass-market, sunbeds-lined-up-nose-to-tail resorts found on the east coast.

Famous faces such as Catherine Zeta-Jones, Elton John and Rod Stewart have all stayed on the island recently. Hollywood star Nicolas Cage, who is filming his new sci-fi martial arts film Jiu Jitsu in this tax-friendly country, is also suitably impressed.

Interest in this part of Cyprus —just over half an hour from Larnaca airport — is coming not just from the UK, but also from well-heeled guests from countries such as Russia and Germany.

It had been 13 years since my last visit, so my husband and I decided it was time for a (child-free) break to see this for ourselves. Our base was the recently opened Amara Hotel in Limassol. It distinguishes itself from the competition by having not one, but two, Michelin-starred chefs behind two very different restaurants on its beach-lined premises — Nobu Matsuhisa and Giorgio Locatelli.

The arrival of such high-profile cuisine has caused a stir, and on our first night we rubbed shoulders with the daughter of the country’s president, Nicos Anastasiades. Ino was celebrating her birthday (staff were too discreet to say which one) into the early hours.

The great and the good descended on the hotel, leaving their pillar-box-red and canary-yellow Ferraris parked outside. DJs worked the decks, waiters scurried around, and sommeliers advised, while the glitterati, in sequins, jewels and towering heels, partied hard (pausing to post about their beautiful lives on Instagram). 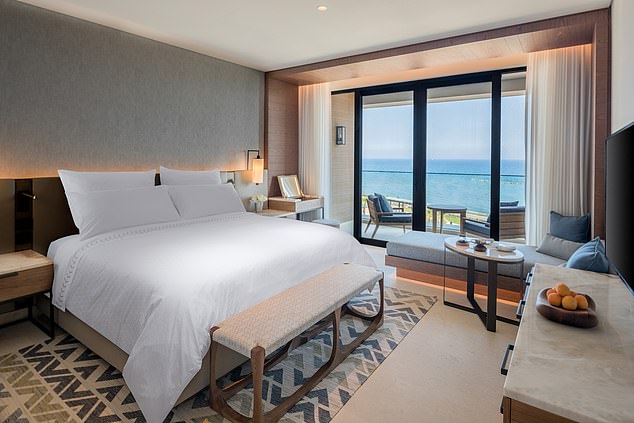 Caroline stayed at the Amara Hotel, which has two Michelin-starred chefs behind its two very different restaurants

Amara’s infinity pool is where, if you’re not willing to strike a pose at the water’s edge with a perfect tan and the tiniest of bikinis, then you’re not getting into the spirit.

The hotel is rightly proud of its coastal location, with each of its 207 rooms offering a 180-degree view of the sea.

Developers at Amara hit a snag when digging the foundations, uncovering a 50ft section of an ancient wall and well dating back to 3BC, from the Kingdom of Amathus.

Forbidden to touch them, they had to innovate, building their state-of-the-art spa around both, turning them into a feature to admire while being pampered and preened.

Cyprus has so many ancient ruins. One special site is the sprawling ruin of Kourion, a kingdom whose surviving remains date back to 300BC.

The mosaics from a 5th-century Christian house are remarkable, while the lovingly restored theatre overlooking the coastline acts as the backdrop for a lively season of performances throughout the summer.

The stage provides a lesson in acoustics — a whisper at its centre can be heard loud and clear from the highest tier.

Cypriots appear to love all things noisy, namely music. Restaurants vie for custom with the twang of a baglama (a tiny ornate guitar), or the bouzouki, which is almost as small. George Formby would be jealous.

In the mountain village of Omodos, septuagenarian Polys — sporting the bushiest of white moustaches — plucked away for hours, indulging a local family’s request to allow their young son to take up the microphone and belt out traditional songs. 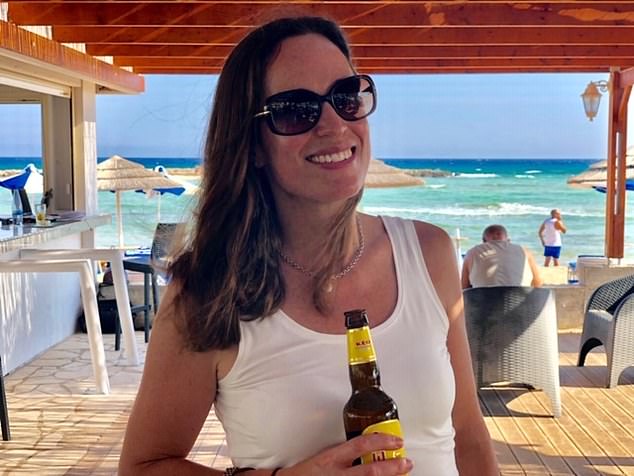 Relax: Caroline, pictured above, enjoys a cold beverage during her holiday to Limassol

The songs were so loud and performed with such gusto that other diners at Makrynari sat contented, not bothering to speak until there was a pause in the voluminous music. At a tavern in Old Limassol was the fabulous sight of Christos seated at a grand piano singing his heart out — only for us to realise that the original keys had been stripped out and replaced by a small electric Casio keyboard, a fan and an iPad.

He was as happy crooning Elvis as he was breathily performing Sting’s greatest hits, before moving back to his roots.

It seems the average Cypriot doesn’t take themselves too seriously and is determined to enjoy life. That was evident by the fact that every street, every beach, every restaurant and bar was filled with local voices alongside visitors.

Both are drawn to Old Limassol, an attractive maze of narrow streets and squares which, until a few years ago, was largely boarded up.

At its centre lies a fine medieval castle where Richard the Lionheart married Berengaria of Navarre, who somewhat unusually travelled on with her husband to the Third Crusade.

One of the most appealing aspects of Cyprus is there is a story at every turn.

With the influence of Byzantine monks, Arabs, Crusaders, Romans, Greeks, Ottomans and British all trying to take control — not to mention the Greek-Turk political divide — there is plenty of source material.

The difference now is that absorbing this fascinating history can be done in style, with a glass of something surprisingly tasty in hand.

Caroline and her husband flew from Heathrow to Larnaca on British Airways (ba.com) from £251 return. They stayed at the Amara Hotel, Limassol, with B&B doubles from £438 (amarahotel.com). Tours were arranged through the Cyprus Ministry of Tourism (visitcyprus.com).