Australians face giving up red meat under a net zero by 2050 climate change target – as much of the developed world questions if the goal is too ambitious.

That’s the grim warning from Queensland senator and former economist, Matt Canavan, and BAEconomics managing director Brian Fisher if the country proceeds with that environmental ambition, despite Australia’s carbon emissions representing a miniscule 1.4 per cent of the global total.

Both Prime Minister Scott Morrison and Labor leader Anthony Albanese have committed to either eliminating or offsetting carbon emissions by 2050, despite much of Europe walking away from the same target in the face of rising energy costs, after heavily relying on Russian gas.

Australians could be making big sacrifices for nothing, in a bid to curb sea level rises, as other major economies shirk their responsibility to alleviate global warming and keep temperature rises to 1.5C above pre-industrial levels.

Senator Canavan, a Nationals backbencher who is based in the beef cattle city of Rockhampton, said that under net zero by 2050, meat would become a luxury item.

‘I don’t think people would vote to have red meat banned,’ he told Daily Mail Australia.

‘Welcome to your net zero world where you’ll only be able to have a steak, chips and salad once every three weeks or so.

‘If you’re going down to your local RSL, there just won’t be red meat on the menu.’

Food prices would also surge, beyond already high inflation levels, as agricultural fertilisers were phased out.

‘I don’t think they’d vote to have their food prices skyrocket if modern fertilisers were banned – but they come from natural gas,’ Senator Canavan said.

‘What happens to our food supply?’

Senator Canavan, who is often a lone voice opposing net zero on the Government backbench, said those calling for more ambitious action on climate change often lived in wealthy electorates. 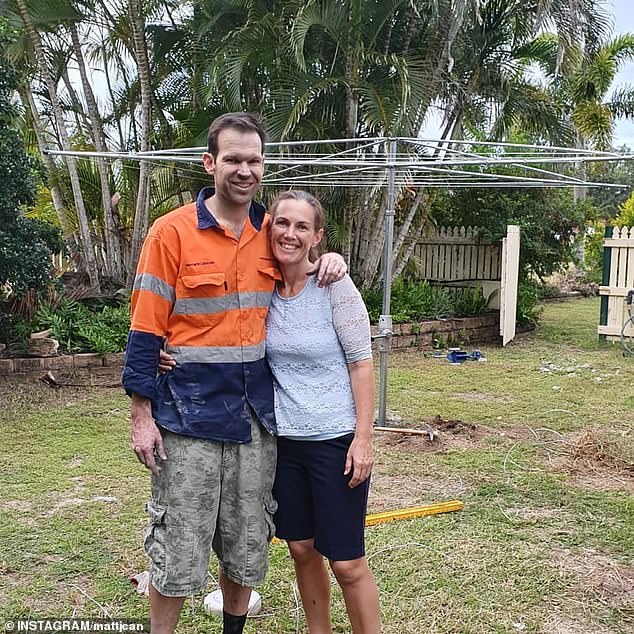 Senator Matt Canavan (pictured left with wife Andrea), a Nationals backbencher who is based in the beef cattle city of Rockhampton, said that under net zero by 2050, meat would become a luxury item

‘This is the hypocrisy here: the inner city people are championing net zero policies; they’ll be fine, they’ll just pay the extra prices for the eye fillet,’ he said.

‘Steak prices in Melbourne restaurants will be $100 and people will pay it.

‘It’s those that continue on with a high consumer lifestyle, and probably create more emissions than the average person through flying and travelling, who want everybody else to suffer.

‘So many of the “loud Australians” are based in inner-city electorates, and they tend to have a bigger megaphone.’

Climate change independents are polling strongly in inner-city, harbour-view Liberal Party seats in Sydney, including Wentworth in the eastern suburbs and North Sydney, and the wealthy inner-Melbourne electorates of Kooyong and Goldstein.

Dr Fisher said both major parties had failed to explain the cost of achieving the net zero target in less than three decades.

‘If you spend enough money on it, you can probably do it, but it’s really not that far away 2050,’ he told Daily Mail Australia.

‘The transformation we’re talking about to get to net zero is absolutely huge.

‘Basically, what you’ve got to do is you’ve got to turn around the Australian economy which has been dependent on fossil fuels forever, basically.’ 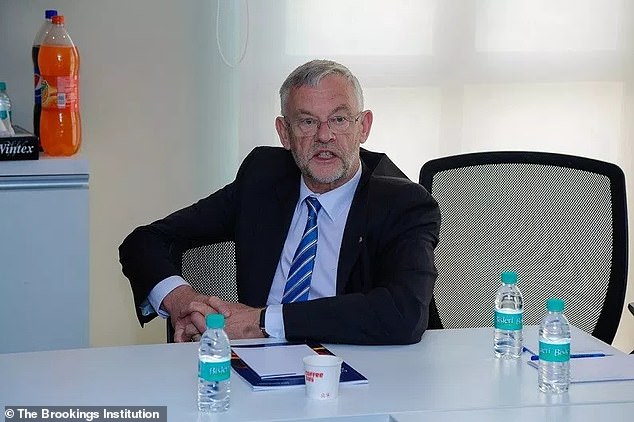 ‘If you look at methane, that means you’ve got to deal with burping livestock,’ he said.

‘That’s actually probably going to turn out to be pretty hard.

‘I don’t think the world’s population is going to turn vegetation overnight frankly.

‘I just don’t think that’s realistic so that means to get rid of those emissions, then you have to offset them somewhere.’

While Australia is one of the world’s larger greenhouse gas emitters per capita, the 494million tonnes it produced in 2021 is only a fraction of China’s 11.9billion tonnes, International Energy Agency figures show.

China produced fewer emissions for every resident, compared with Australia, but it was still responsible for a third of the world’s carbon emissions last year, as its carbon pollution increased in 2020 and 2021 following a strong economic rebound from the pandemic.

Senator Canavan, a former Productivity Commission economist, argued the net zero by 2050 goal was effectively dead because the likes of Germany and Italy were reviving coal-fired power stations to be less reliant on natural gas from dictator Vladimir Putin’s Russia. 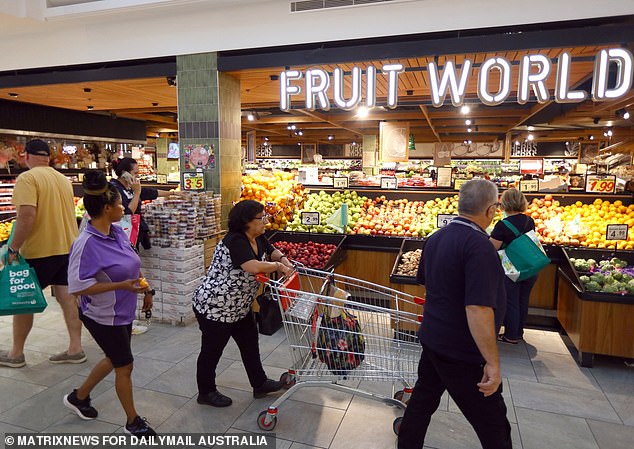 Food prices would also surge, beyond already high inflation levels, as agricultural fertilisers were phased out (pictured is a Sydney Woolworths supermarket)

The United States, which also has a net zero by 2050 target, is battling even higher inflation than Australia.

‘That doesn’t mean to me we should do nothing but it definitely means we shouldn’t go anything unless other countries are doing it too,’ Senator Canavan said.

‘There’s pretty much no-one going towards net zero right now because Europe’s having to fight Putin, America’s trying to control its inflationary pressures.

‘About the only country in the world that’s moving towards net zero is Afghanistan and they’re not doing it because they’re installing a lot of renewable energy.’

‘This has to have some impact on the speed with which we make progress towards net zero,’ he said.

‘Whether the targets are dead, that’s probably an overstatement but there’s certainly going to be some modification in terms of various countries in Europe’s ambition.’

Senator Canavan, a former resources minister, said adopting a net zero target in less than three decades would also make it harder for Australia and other democracies to defend itself against a more aggressive China.

‘It’s about trying to find a correct balance between reducing our carbon emissions and maintaining an industrial economy that can defend our nation, defend our democracy and I don’t think we’re getting that balance quite right in the West right now,’ he said.

The United Nations’ Intergovernmental Panel on Climate Change is calling for net zero by 2050, or a 45 per cent emissions cut by 2030 to keep temperature rises to 1.5C above pre-industrial levels. 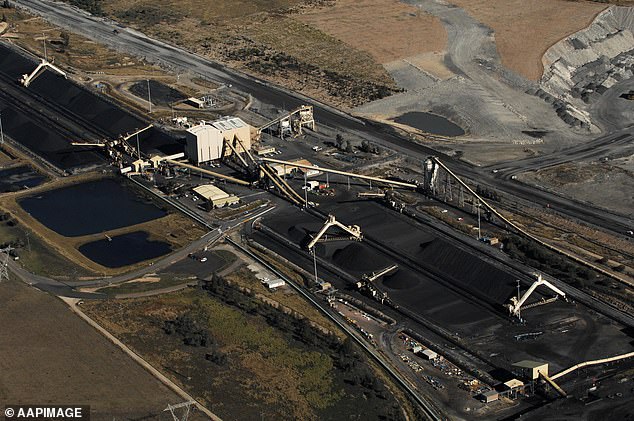 The United Nations’ Intergovernmental Panel on Climate Change is calling for net zero by 2050, or a 45 per cent emissions cut by 2030 to keep temperature rises to 1.5C above pre-industrial levels (pictured is an open cut mine in the New South Wales Hunter Valley)

‘The kind of action we’d need to keep to that just won’t happen in an environment where China and Russia and India are not fully co-operating with the rest of the world,’ Senator Canavan said.

Both Labor and the Coalition have ruled out introducing a carbon price, after former Liberal leader Tony Abbott won the 2013 election in a landslide by campaigning to scrap ALP prime minister Julia Gillard’s hated carbon tax.

Dr Fisher said companies would be unlikely to phase out the use of fossil fuels, like petrol and coal, unless a carbon price of $200 to $300 a tonne was imposed – a level more than 10 times the short-lived $23 carbon tax that existed in 2012 and 2013.

That would also mean passing on the cost on to consumers, which in turn would mean incredibly high inflation.

‘When you start to mitigate those things, you’re going to add costs, there is no escape from that,’ Dr Fisher said. 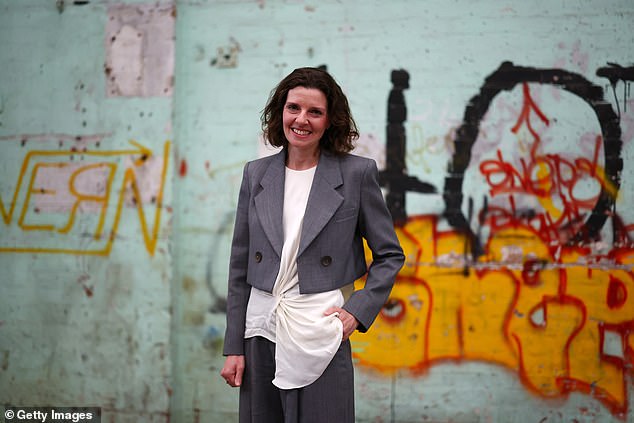 Climate change independents are polling strongly in inner-city, harbour-view Liberal Party seats in Sydney, including Wentworth (candidate Allegra Spender, pictured) in the eastern suburbs and North Sydney, and the wealthy inner-Melbourne electorates of Kooyong and Goldstein

Former Labor prime minister Kevin Rudd in early 2010 abandoned plans for an emissions trading scheme, with a floating price on carbon, after the Greens voted against it in the Senate with the Coalition.

But his successor Ms Gillard imposed a carbon tax, with a fixed price, after Labor lost its majority at the August 2010 election, forcing it to rely on the Greens and regional independents to form a minority government.

Political calculations about the cost of living could potentially see a future government abandon a net zero by 2050 target ahead of an election.

‘If you’re going to hit net zero, it’s costly regardless of what politicians tell you and as a consequence of that, there’s going to be a whole lot of political juggling to mitigate some of those cost pressures on certain parts of society,’ Dr Fisher said.

Senator Canavan said despite the political slogans, very few people would be prepared to make sacrifices to achieve net zero emissions, even in wealthy cosmopolitan postcodes. 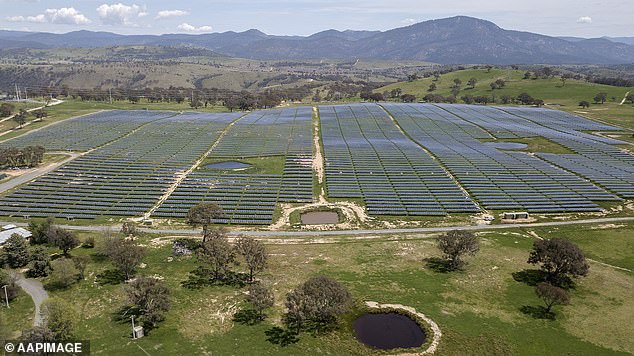 Both Prime Minister Scott Morrison and Labor leader Anthony Albanese have committed to either eliminating or offsetting carbon emissions by 2050, despite much of Europe walking away from the same target in the face of rising energy costs, after heavily relying on Russian gas (pictured is a solar farm near Canberra)

‘The actual number of people that truly understand this or advocate this in such a radical way is quite small, I don’t think there’s a large-scale support there in the community even in inner-city electorates for this type of radical action,’ he said.

Then there is the issue of mining rare earth minerals like lithium, used for electric car batteries, along with nickel, cobalt and copper.

‘There’s a real question about whether those resources actually even exist and that hasn’t been addressed,’ Dr Fisher said.

Australia’s share of global carbon emissions, from domestic use, stood at just 1.4 per cent in 2017, a report by the German-based Climate Analytics group showed.

‘The science says Australia can’t change the temperature of the globe on its own,’ Senator Canavan said.

But with a population of 25.7million Australia, which still relies heavily on coal for electricity generation, has some of the world’s highest per capita carbon emissions.

UK climate think tank Ember noted Australia had the world’s highest emissions from burning coal for electricity based on population, noting they were at levels five times the global average, ahead of China and India.

Australia’s 494milllion tonnes of carbon emissions in the year to March 2021 was one 24th that of China, even though Australia’s biggest trading partner has 56 times the population, or more than 1.4billion people.