Penrith star Izack Tago explains why he’s the ONLY player in the NRL who still uses a stone-age flip phone: ‘You have to click the button four times to send one letter on a text’

You’d expect a 20-year-old athlete about to play in one of the biggest games of his life to be on his phone a lot, but not Penrith’s Izack Tago – he’s still got an old-fashioned flip mobile that he barely touches.

The rookie back-rower turned centre – who will take the field against Parramatta in Sunday night’s grand final – has put himself on a social media and internet ban, unlike every other player in the NRL.

Izack Tago of the Panthers offloads to Dylan Edwards for a try during the round five match against the Canterbury Bulldogs. It’s a safe bet he didn’t put a video of it up on his Instagram story afterwards 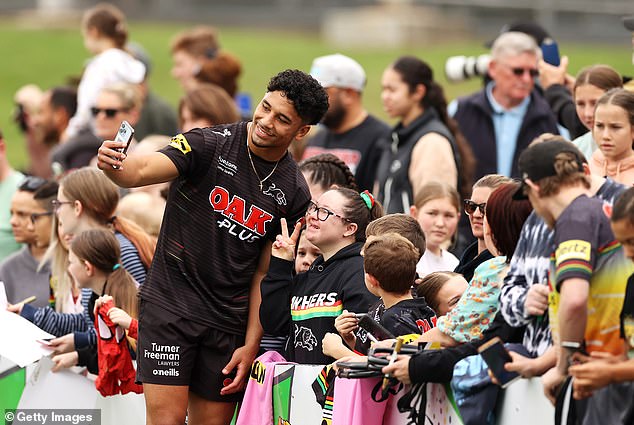 Tago using a fan’s phone to take a selfie during a training session earlier this week. Tago himself only uses a flip phone as he’s put himself on a social media and internet ban to better focus on being a professional athlete

But Tago isn’t like most stars who live on the internet and social media – and that’s where the flip phone comes in.

‘It’s one of those phones where you have to click the button four times for one letter,’ Tago told the Daily Telegraph.

‘So I don’t really message either, mostly so I’m not on my phone for long, but because it’s hard as to message someone.

‘So I have to either call, or even go visit, whoever I want to speak to. It makes my connections more genuine.’

It does make it hard for teammates to communicate with him, though – even Tago’s skipper Nathan Cleary can’t get a reply to a message. 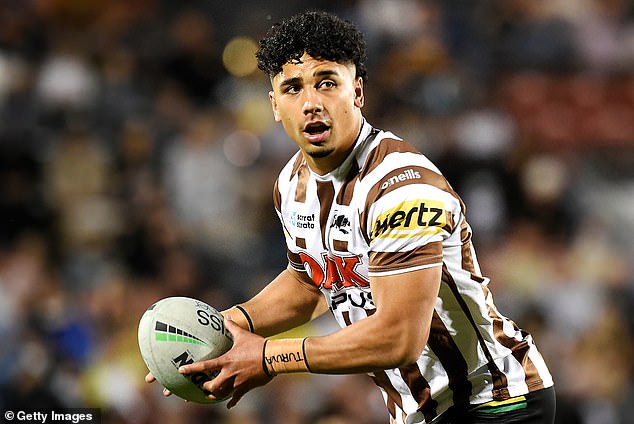 Tago says he now has to call or visit people he knows, and it’s made connections more genuine

‘It’s hard to get in contact with him outside of training because he is barely on his phone,’ Cleary laughed.

‘It’s a good thing, but it is very unique for such a young guy to take that initiative to take himself away from the social media world.’

The inspiration for Tago’s decision to ditch the smart phone and stay away from the internet originally came from his desire to keep his place in the Panthers team.

He wanted to limit his distractions from being a professional athlete – and that started with his phone.

‘It’s a bit like getting off social first but I just took the phone thing to the next level, I’m sort of an extremist in that sense,’ Tago said.

‘If I want to do something, I try to do everything possible to limit what I am trying to get rid of… so the flip phone keeps me off my phone. I can’t play games, accessing apps isn’t easy.’ 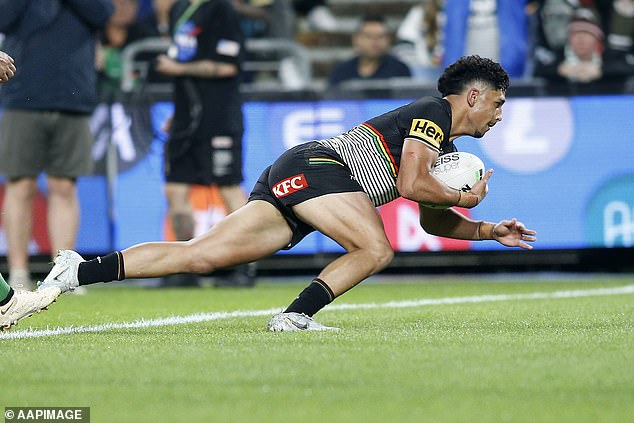 Tago is pictured scoring a try against Souths in the prelim final. Tago says life is better without a smartphone and if something is important enough he will find out eventually

Not having a smartphone means Tago misses out on a lot of footy news, but he figures if something is important enough, he’ll find out about it eventually.

‘It has the internet, barely, it’s hard-as to use too,’ he laughed.

‘But that’s another reason I have it, I really don’t like paying attention to the external noise or things like that.

‘So I never read any of it. I only ever find out about it at training.’