Why retirement was the biggest handicap for Britain’s best jockey

Hey-day: AP McCoy and his horse, Binocular, winning in Cheltenham back in 2010

Since retiring from racing more than two years ago, the former champion jockey, AP McCoy, admits he’s gained more than a little weight.

During his 23-year career, AP rigidly watched what he ate — a single gained pound could make the difference between winning or losing a race, so he limited himself to one meal a day — but suddenly he was free to, as he puts it, ‘have a bit of fun’.

‘Having been so disciplined all those years, I thought I’d just lose it a bit, let go and not worry,’ says 43-year-old AP.

‘I started having fried breakfasts — sausage, eggs, bacon — every morning, and if I went out I would always order steak and chips, instead of fish and vegetables like I used to.

‘If I was at home I’d polish off a packet of chocolate biscuits while watching the football, and I went from riding and exercising every day to doing virtually nothing — I didn’t even get on a horse for eight months.’

Throughout his racing career, which saw him win the champion jockey title 20 years in a row, his weight had hovered around 9 st 10 — at the lower limit of a healthy weight for his 5ft 10 frame.

However, after hanging up his saddle for the last time in 2015, he quickly put on more than 2 st.

Last summer AP, who became Sir Anthony McCoy OBE in 2016, was shocked to discover he couldn’t fit into a waistcoat he’d bought less than a year earlier to wear on TV, in his new career as a racing pundit.

Yet it wasn’t just his waistline that was suffering. Eight months ago AP decided to have an annual health check — similar to those he’d had as a jockey and always passed with flying colours.

This time he underwent a new blood test said to detect the risk of developing type 2 diabetes, the form usually associated with obesity and a sedentary lifestyle, long before any symptoms, including raised blood sugar, appear. 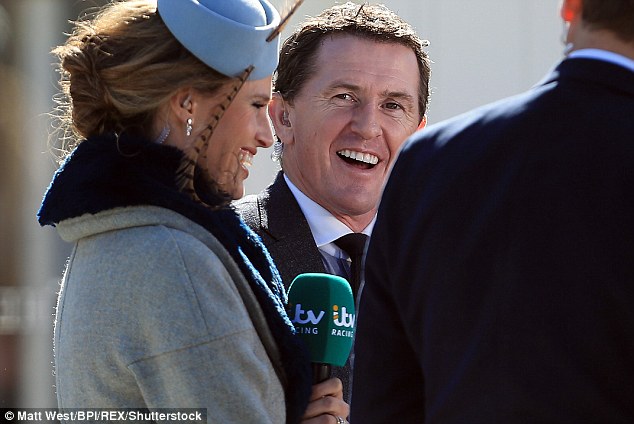 Oops! Last summer AP was shocked to discover he couldn’t fit into a waistcoat he’d bought less than a year earlier to wear on TV, in his new career as a racing pundit

Astonishingly, given that two years previously he was exercising every day and was pounds away from being classed as underweight — he is also teetotal — AP was told his results showed that unless he changed his ways he could soon develop the condition. His weight, which peaked at 12 st 7, had only just crept into the overweight range.

‘Somehow I had stopped thinking being healthy mattered — this reminded me it did, but it was surprising how quickly damage could be done,’ he says.

AP had seen first hand how serious type 2 diabetes can be — his mother Claire had been diagnosed with it at the age of 45. She went on to experience circulation and heart problems as a result — all of which contributed to her dying in her 70s, on Boxing Day last year.

‘If I hadn’t seen Mum go through it I might not have taken it so seriously, but I knew how bad it can be.

‘I decided to clean up my act and start imposing a bit of discipline again,’ says AP, who lives with his wife, businesswoman Chanelle, and their children, Eve, ten, and Archie, four, near Lambourn, Berks.

The new test measures levels of adiponectin, a hormone made in fat cells. The lower your levels, the higher your risk of developing insulin resistance, the precursor to type 2 diabetes where the body starts to become less responsive to the effects of insulin.

The manufacturers say their test can act as a wake-up call to help prompt people to take action and lose weight.

With Diabetes UK estimating there are 11.5 million people whose weight alone puts them at risk of developing type 2, could the manufacturers have a point?

The question is how useful it is to measure adiponectin. While a study published in BMJ Open Diabetes Research and Care in 2016 found that ‘adiponectin level is a powerful risk marker of incident prediabetes’, not all experts are convinced of the test’s usefulness. 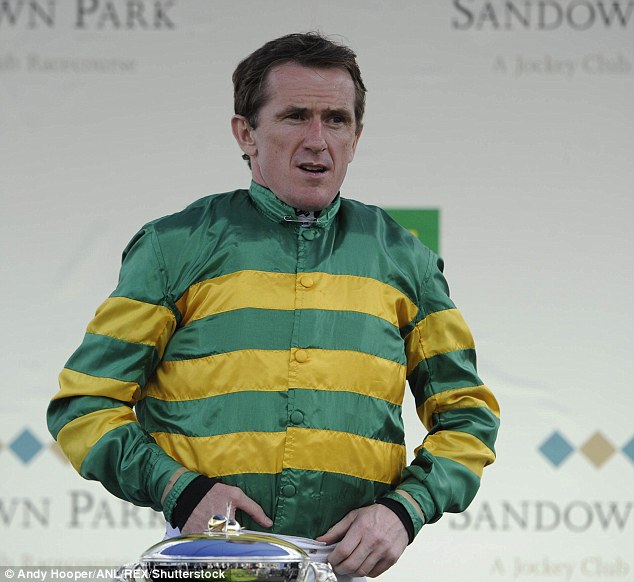 Weigh to go! The sportsman found that over-relaxing his diet dramatically affected his fitness

‘It is true that higher levels of adiponectin appear to be protective against diabetes,’ says Naveed Sattar, a professor of metabolic medicine at the University of Glasgow, who has researched the role of the hormone.

‘It is thought to help regulate glucose levels and have a role in the breakdown of fats.

‘Although it’s made in fat cells, when you have less fat you have higher levels in the blood, so it might be that fat cells in lean individuals make more of the stuff. Its levels go up or down depending on how much insulin you make to keep sugar levels down.

However, he adds, ‘if adiponectin was protective against diabetes, why not just give people adiponectin to protect them from diabetes?’

So far there is no conclusive evidence that this would help.

Furthermore, Professor Sattar says that adiponectin levels can also be affected by conditions such as heart or kidney disease.

Somehow I had stopped thinking being healthy mattered — this reminded me it did, but it was surprising how quickly damage could be done

Type 2 diabetes occurs when fat builds up in and around the organs — especially the liver — and affects the ability of insulin to keep blood sugar levels in check, explains Professor Sattar.

Initially the pancreas has to pump out more and more insulin to keep blood sugar in the normal range — this is insulin resistance. Ultimately type 2 diabetes follows when blood glucose levels rise beyond healthy levels, as the pancreas can no longer pump out enough insulin.

Typically type 2 is diagnosed when people have symptoms such as excessive thirst or going to the loo a lot. These are signs that the body is trying to get rid of the excess glucose.

However, by then damage will already have been done. High blood sugar can damage the blood vessels all over the body, which could lead to heart disease, sight issues and nerve damage, for example.

It is normally diagnosed with a urine test to check for glucose or blood tests — one which checks glucose levels, or the HbA1C test, which measures average sugar levels of the past three months.

The new test would work before blood sugar levels start to climb, says Susan Hammond, global sales manager of Randox, the company that developed the test.

She claims that levels of adiponectin will start to dip a year to six months before insulin resistance starts and before any damage is done.

Randox offers the test as part of a year-long package costing £480 (it includes a follow-up advice programme and retest). They say it could be made available to the NHS as a standalone test costing £10 to £15. 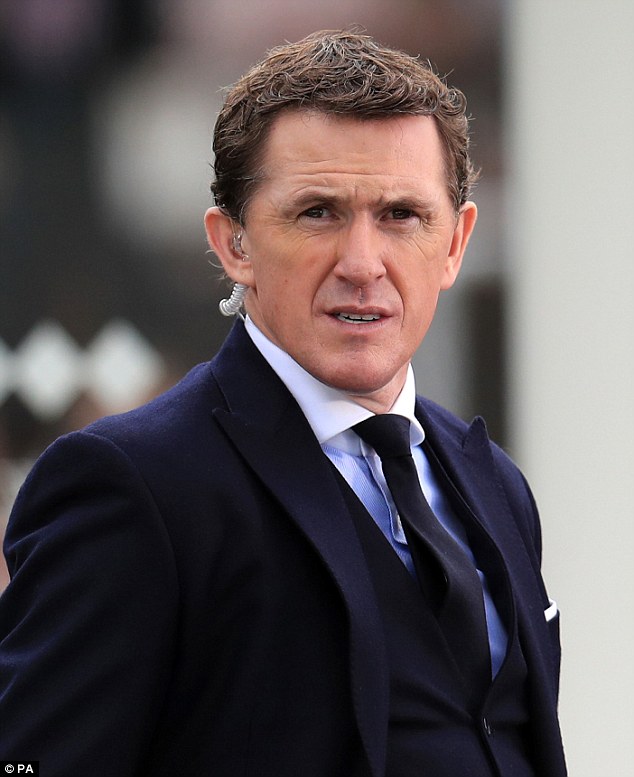 ‘Having been so disciplined all those years, I thought I’d just lose it a bit, let go and not worry,’ says 43-year-old AP, who has since reversed his weight gain

Emma Elvin, a Diabetes UK clinical adviser, says there needs to be more research ‘to determine if testing for adiponectin is a good way of detecting type 2 diabetes risk.’

For Professor Sattar a cheaper way to assess risk of diabetes is to look at a patient’s age, sex, history, postcode (social class is linked to type 2 diabetes) and ethnicity. ‘I would also want to know their height and weight,’ he says. ‘Using those we can get an 80 per cent accurate idea of someone’s risk of type 2 without even taking a blood sample.’

‘Where it might be useful is in pregnancy, when other tests such as HbA1C aren’t so accurate as your metabolism speeds up and sugar levels change –– in early pregnancy they tend to go down.’

He also argues that preventing diabetes does not mean taking a test, but requires sticking to a healthy weight and lifestyle.

AP, who paid to have the test himself, say the results gave him the spur he needed to find his discipline once more.

‘The results helped me get my life back together again,’ he says. ‘I started going to the gym four days a week and I stopped having sugar in my tea. I went from a packet of chocolate biscuits to one and had cereal, not a fry-up, every morning. Not major changes, but enough.

‘When I went back for another test a month ago, my adiponectin was better and my cholesterol, which had also been slightly higher than it should be, was back at healthy levels.’

He says he has now learnt his lesson. ‘For me it was a bit of fun at the beginning, letting it go a bit — although my wife didn’t like me bigger. She said: “I quite like fit men”. It was strange being in that position, thinking “Am I getting fat?”

‘I’m still having fun but just watching it a bit more — I’ve lost eight pounds in eight months. I’m quite happy now. I’m not living a boring life, but I’m looking after myself.’