It is an elegant craft, befitting the jet-set image enjoyed by this northern stretch of the Bodrum Peninsula of Turkey.

Stately yachts dot the bay in front of the Macakizi hotel. With the season in full swing, staff have their hands full, thwarting paparazzi efforts to snap models chilling over Whispering Angel rosé on the waterfront decking.

Turkish delight: The Macakizi hotel, pictured, opened in 2000 and has blossomed into 75 simple but comfortable rooms and suites with gorgeous sea views

During my visit, it is not models but an international gathering of architects, wine masters and intellectuals who are among the guests.

Rifat Ozbek, who designed the cushions for the hotel, is a regular visitor. From Chelsea Clinton to U2’s Andrew Clayton, these eclectic visitors are linked to gregarious owner Sahir Erozan whose charm gives the place a well-run but relaxed atmosphere.

Ever since Ahmet Ertegun, the late co-founder of Atlantic Records, bought a summer house here in the Seventies, Bodrum has been a magnet for celebrities and rock royalty.

‘She was a great character, and soon Istanbulli society was flocking to the hotel,’ says Erozan.

Today, Bodrum heaves with tourists, the harbour crammed with gülets for hire and the promenade lined with tourist tat.

The famed 15th-century Crusader Castle of St. Peter is closed for renovation but you can visit the curious villa-museum of one of Bodrum’s colourful residents, the late transvestite singer, Zeki Müren. Colourful residents can be traced back to ancient Bodrum, then known as Halicarnassus. King Mausolus, who ruled the city, married his sister and designed his own tomb.

The Mausoleum of Halicarnassus was 45 metres high, adorned with statues and known as one of the Seven Wonders of the World. Sadly it’s now little more than a large hole in the ground, destroyed by earthquakes and serial pillaging. 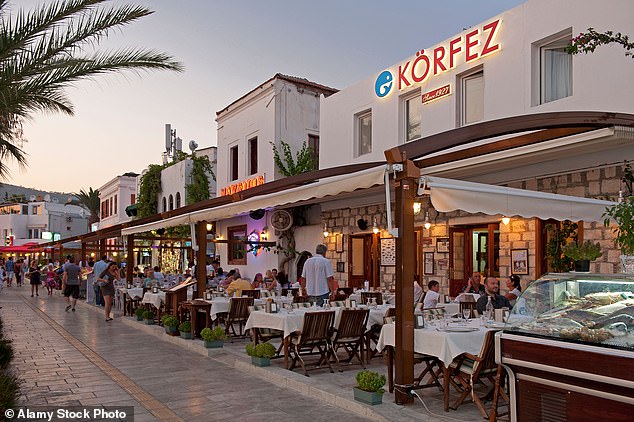 Today, Bodrum heaves with tourists, the harbour crammed with gülets for hire and many bars and restaurants

Chunks of its marble were recycled in the walls of the Crusader castle, while statue remnants can be found in the British Museum, along with the Parthenon Marbles.

The current Macakizi hotel, located far from the hubbub of Bodrum, on the opposite side of the peninsula, opened in 2000 and has blossomed into 75 simple but comfortable rooms and suites with gorgeous sea views.

They cascade down a hillside resplendent with oleander and bougainvillea to the water’s edge, while open-air bars, restaurants and a Turkish hammam, offer refreshment at each level.

Refreshment proves important on this trip, beginning with a visit to the award-winning Urla winery, three hours’ drive from the hotel.

Can Ortabaş, its owner, is famed for finding and cultivating the famous ‘lost grape’ of the region, Urla Karasi.

‘In Ottoman times, the area produced 72 million litres of wine a year but, since the fall of the Empire in the Twenties, the vines were untended. We are trying to restore the tradition.’ 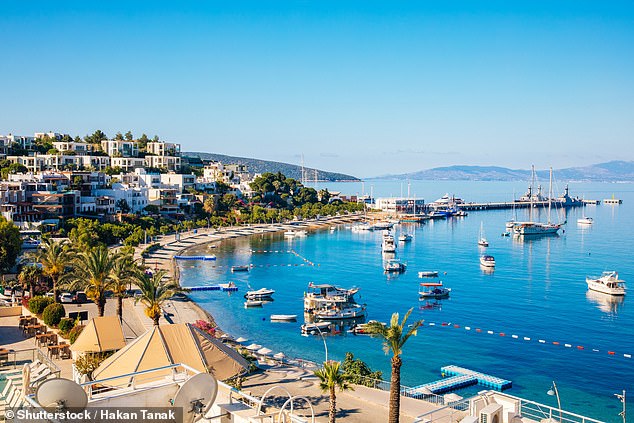 Urla wines are among those served at Macakizi. Under chef Aret Sahakyan, contemporary Turkish cuisine reaches its apogee. Days begin with lavish breakfasts, from healthy chia seed and goji berry compote, to naughty home-made pastries such as sesame-paste cookies.

Most guests do not venture beyond this haven of hedonism. But I head out to visit the seaside village of Gümüşlük which, I am told, retains a flavour of pre-tourism Bodrum. For this, we have the ancient city of Myndos to thank, whose ruins lie largely unexcavated, beneath the fields.

Here and there you find a section of wall, fragments of mosaic or half-buried pillars — meaning that development is restricted.

As Feti pilots our speedboat into the harbour, I see a village of little fishing vessels and unsurfaced roads.

A street lined with artisans’ stalls leads up from the harbour. Everything from leatherwork and woodwork, glassware and ceramics is to be found here. ‘It’s a place where people tired of Istanbul come for an alternative lifestyle,’ says Bahar, my guide.

Back at Macakizi, Chef is preparing a feast: a seven-course dinner starting with smoked paprika-crusted octopus with quinoa toast and ending, in the early hours, with an astonishing beetroot sorbet, strawberries and sumac-dusted meringue.

Gastronomy and fine wine, limpid waters and a party spirit… no wonder the glitterati come. The Cote d’Azur suddenly looks a little tired.

Double rooms at Hotel Macakizi from £382 per night, including breakfast and three-course dinner, (macakizi.com). Return flights from Gatwick to Bodrum with Easyjet, (easyjet.com), from £190.