While on a recent night out, 59-year-old health guru Gillian McKeith was photographed wearing a transparent skirt which showed off her knickers. In contrast, her 24-year-old daughter, who accompanied her, sported a very demure outfit.

Not surprisingly, McKeith’s appearance triggered countless spiteful online comments about her ‘embarrassing’ behaviour. Among the kinder observations were: ‘My daughter would kill me if I dressed like that’ and ‘She makes Madonna look like a nun!’

Here, mother and daughter explain what they think about that outfit and the caustic reaction it triggered . . .

Gillian McKeith, 59, (pictured right) received a flood of spiteful comments for her choice of outfit on a recent night out with her daughter Skylar, 24, (pictured left)

As I unpacked the new dress I had ordered online from Topshop, I had little idea that I was about to detonate a fashion bomb.

I’d bought it to wear to a premiere of Do Something, Jake — a film about a young introvert. All I could see was a fun, pretty, admittedly rather unusual outfit that was right up my street.

Yes, the lower half was a tad flimsy — but as both my daughters [Skylar, 24, and Afton, 18] will testify, when it comes to fashion, my mantra is the more daring and unusual the better.

It was only when I walked into the party amid a glare of paparazzi flash bulbs and raised eyebrows that I realised my skirt was a little more translucent than I had thought. In fact, it was entirely see-through.

Was I horrified? Not in the slightest. In fact, I thought it was terribly funny.

I felt fabulous, and if the skirt showed off far more of my upper thighs than I had intended, so what? The last time I looked there was no law against that.

Sadly, not everyone feels the same way.

A few online (and, unsurprisingly, anonymous) commentators suggested at the very least I had made a fashion faux pas, and that in future I should wear something more appropriate for my age. Well, that’s their opinion.

I’m a firm believer that there are no universal rules about fashion and I always dress to please only one person — myself. And often that means wearing clothes that are creative, artistic and a little bit different.

It’s the way I’ve always been. 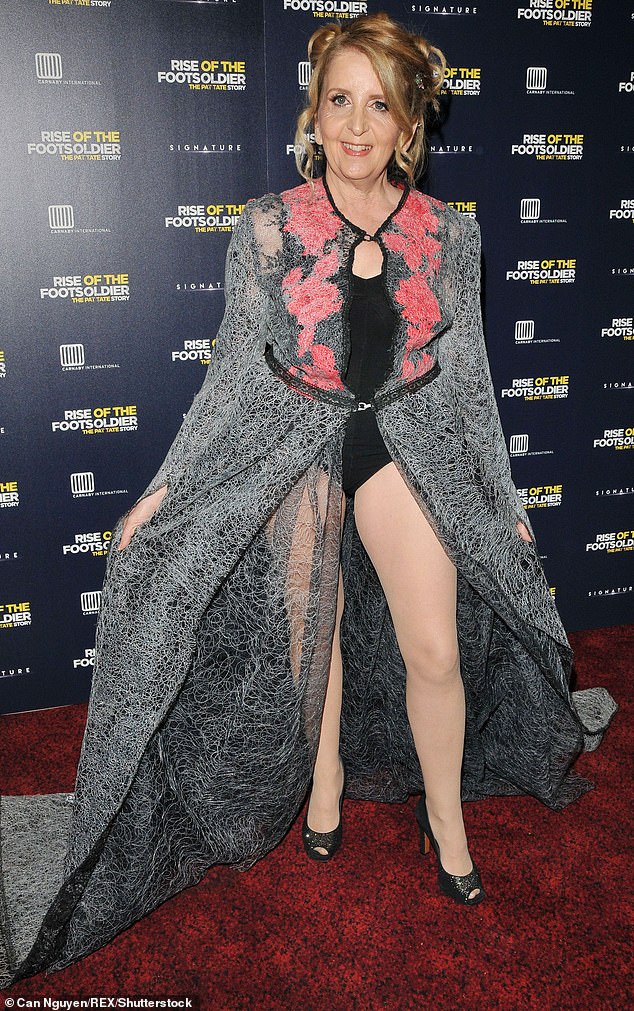 When I was younger, I made my own clothes, and when it came to miniskirts, the ones I wore were certainly mini. And my penchant for flashing a little flesh continued long after my two daughters were born.

I remember going for a night out when Skylar was about four and my mother asking me whether my skirt could get any shorter — exactly as if I were a teenager!

My work in television means having to dress more conservatively for the cameras, but at home it’s always been a different story. I love nothing more than trying out new designers — I particularly like up-and-coming British ones — and experimenting with new styles.

It’s a love I’ve passed on to both my daughters.

Skylar’s style is inherently more conservative — although she was the one who suggested I wear the dress that has caused all the fuss.

If I have passed on a flamboyant gene, it has gone to Afton. A year ago, we both went to another film premiere in outfits made from fabric and glue.

Don’t get me wrong: I’m not trying to compete with my daughters in the style stakes. I’m fully aware of my age, and I can honestly say that it doesn’t bother me at all. If anything, the older I get the more confident I am in my own skin. 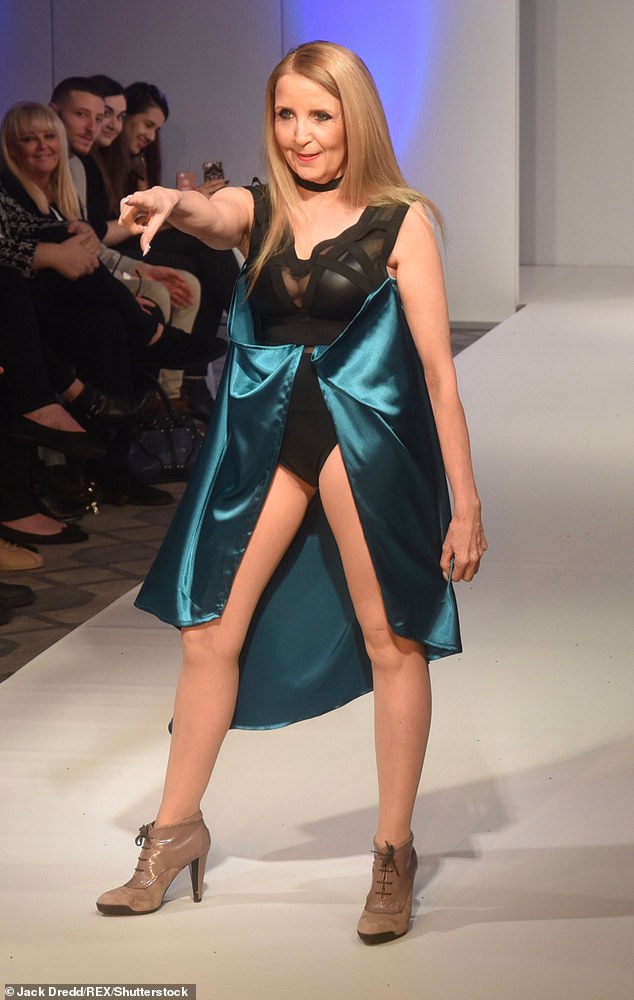 I’m always being told I’m breaking some unwritten rule that I should dress more decorously, a rule that I can’t help thinking owes more than a little to a degree of both sexism and ageism.

If a well-known, older man dresses flamboyantly, the sentiment seems to be ‘good for him’. But when it comes to women, society seems to cling onto this deep-seated notion that those of a certain age must behave and dress in an appropriate manner.

When it comes to my own wardrobe, I really don’t care what anyone thinks, and I’ve told my daughters since they were old enough to listen that the more you care about what other people think the less you can be who you are.

In fact, a lot of people at the film premiere I attended came up to me and told me they loved my dress.

Most of them were complete strangers, and I like to think that they felt they could approach me because my clothes say I’m sociable and fun. Not that I wore them to send any message at all. I wore them because I love fashion and I like doing things my own way. And I don’t intend to stop. 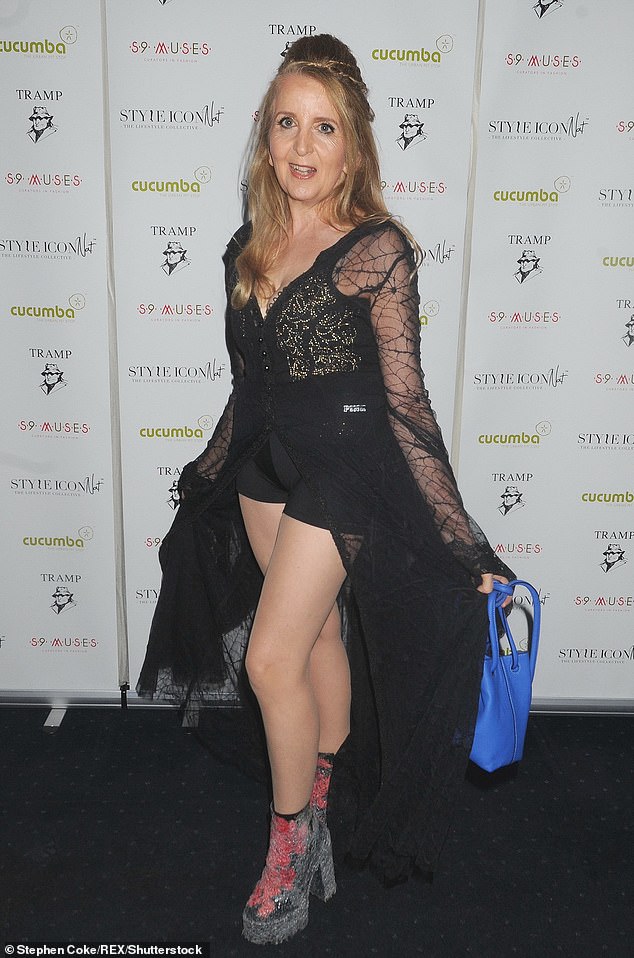 Just the other evening, Mum came bounding into my bedroom to look for a pair of high-heeled boots that I’d borrowed to wear to a friend’s party.

It happens most days: I’m such a fan of mum’s dress-sense that I’m always raiding her wardrobe.

Most of her outfits end up making their way into my wardrobe at some point, along with the crazy, colourful glam-rock boots she wore to the film premiere last weekend that we were photographed at.

But when it comes to evening wear, my style is a little more conservative. 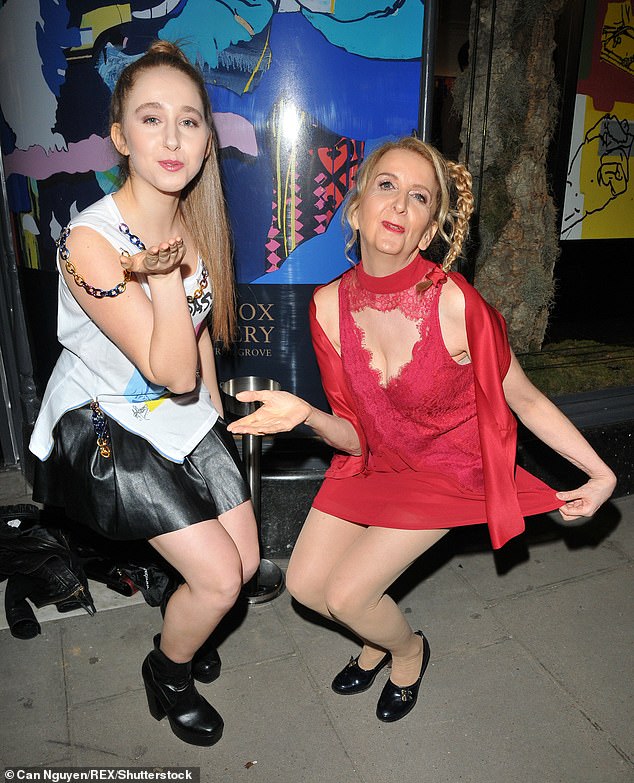 Skylar says her mum (pictured right with Afton) isn’t the traditional type, so she isn’t surprised by her daring fashion choices

So it’s unsurprising that it was Mum’s daring choice of outfit — as opposed to my blue number — that caused tongues to wag.

To me, she looked great in the dress — a leotard bodice layered over with a see-through chiffon skirt. It showcased her enviably toned legs. Admittedly, it’s not a traditional look for a woman of 59 — but then my mum isn’t exactly the traditional type.

In truth, the outfit had Mum’s character written all over it.

I can vouch for the fact that the skirt certainly didn’t look quite as transparent in real-life as it did in photographs, but I doubt Mum minded. In fact, I’ve a suspicion it made her like it more!

Mum may be nearly 60 but, at heart, she’s still a teenager.

And while she’s never exactly been a modest dresser, I have seen her style evolve to become a lot more fun and experimental.

For Halloween last year, she wore a leotard under a cobweb dress, and she’s no stranger to wearing tiny shorts or a see-through dress on a night out. 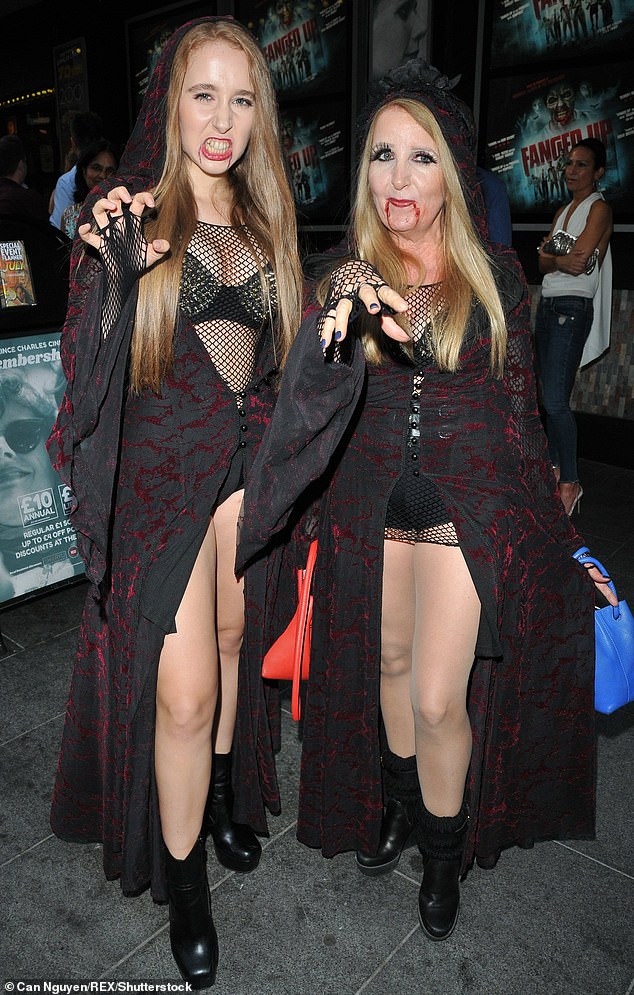 And while I haven’t inherited her flamboyant streak, I think she looked fabulous.

Mum’s youthful outlook is one of the many things I love about her. Mum, my sister Afton and I have always been close and we quite often hit the town together, whether it’s to dinner or even, from time to time, a nightclub.

For my 18th birthday we went to Mahiki, the London nightspot frequented by Prince Harry in his bachelor days. Most people were in their 20s, but Mum was the life and soul of the party.

Her mantra is ‘Do and wear whatever makes you happy’ — a sentiment I think she embraced ever since she was diagnosed with scoliosis, a medical condition which makes the spine twist and curve. Rather than let a deformed back define her, she recognises she still has every right to look wonderful.

I wish people would realise this when they criticise her for doing things a bit differently.

Of course, reading nasty comments about Mum upsets me. But she doesn’t give a hoot. The idea that your age should dictate what you wear is anathema to her. And my sister and I wouldn’t have it any other way.