The Socceroos have announced a second trans-Tasman match as part of their World Cup preparations, with Graham Arnold’s team to host New Zealand at Suncorp Stadium on September 22.

The clash with the All Whites – who failed to qualify for the tournament in Qatar this November after losing their recent playoff 1-0 versus Costa Rica – will come three days before Australia fly to Auckland to face the Kiwis at Eden Park on September 25.

Both friendlies will mark the 100-year anniversary of the first ever senior men’s international fixture between the two nations.

Along with celebrating the centenary of the first trans-Tasman game, which was held on June 17, 1922 and won 3-1 by the Kiwis thanks to a Ted Cook brace, the fixture marks the first time the teams have met in over 10 years.

It is also the first time senior international football has been staged at Eden Park, the traditional home of the All Blacks.

The Socceroos will play two friendlies against New Zealand in September as they ramp up their preparations for the World Cup in Qatar this November (pictured, goalkeeper Andrew Redmayne during Australia’s victory over Peru) 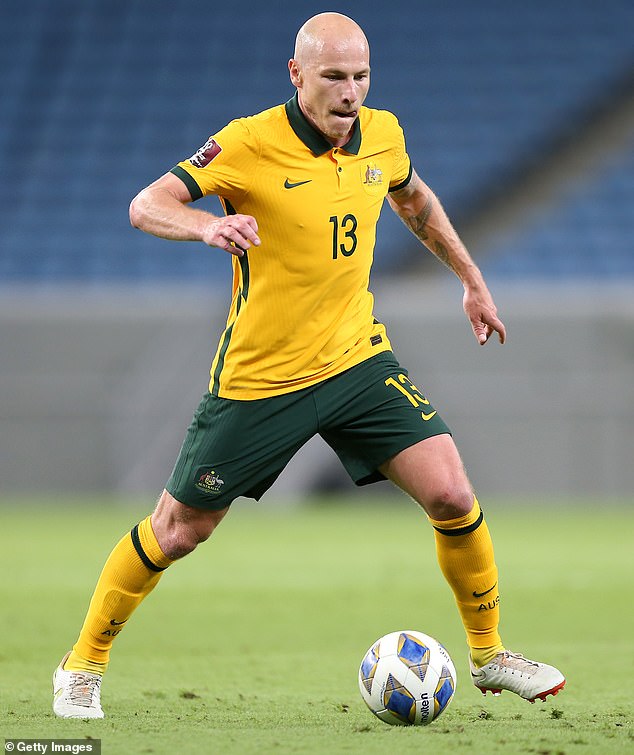 The friendlies in Brisbane (September 22) and Auckland (September 25) will also mark the 100-year anniversary of the first ever senior men’s international fixture between the two nations (pictured, Socceroos star Aaron Mooy)

The Socceroos last played a game in Brisbane in November of 2018, a 1-1 draw versus South Korea in what was the first home game of Arnold’s tenure of the national squad.

The Socceroos’ two matches against New Zealand will be part of Australia’s warm-up for November’s 2022 World Cup in Qatar.

‘I think we will treat the matches against New Zealand as farewell games. It will be a specially important match because in those matches we are going to be celebrating the 100-year birthday of the Socceroos,’ FFA CEO James Johnson told the Sydney Morning Herald.

‘The matches against New Zealand will be a celebration of a fantastic 100 years of Socceroos history, and also let’s farewell and wish the boys all the best going into Qatar.’ 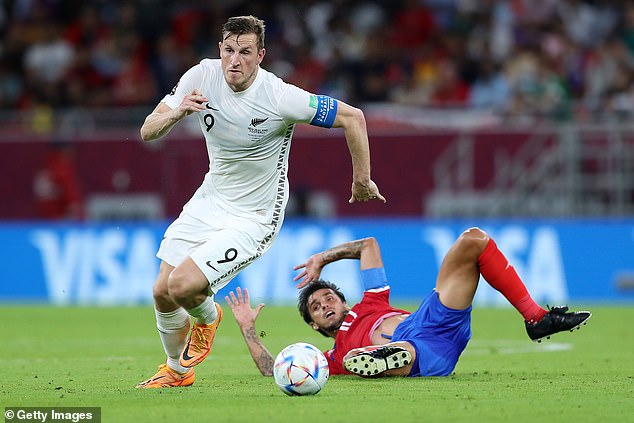 Newcastle United striker Chris Wood will be the key man for the All Whites (pictued, playing Costa Rica last month in Doha)

Tuesday’s announcement was made in Brisbane along with confirmation the Matildas will also play a match at the iconic sporting venue against Canada on September 3.

Tony Gustavsson’s team had already confirmed they will play the Olympic gold medallists in Sydney on September 6.