The three most scandalous letters in the NRL: Why the foul-mouthed abbreviation ‘FEC’ has been front and centre of two of footy’s latest controversies

Two of the biggest scandals currently enveloping the NRL have accidentally unlocked a quiet coded protest players have been using on social media – the simple hashtag #FEC.

The three letters have been used as a kind of siege mentality method of standing up against perceived injustices by footballers including Penrith star Jarome Luai.

Now, with the recent Nathan Cleary spear tackle suspension and puzzling show cause notice issued to Newcastle’s David Klemmer, the meaning of the acronym has become clear.

Klemmer charges into the line against the Bulldogs. He has been asked to please explain why he refused to leave the field when a trainer tried to sub him off late in the game

In typical NRL fashion, the meaning is pretty crude: F*** Every C***, an ‘us against them’ rallying cry.

Klemmer is currently fighting to save his job at the Knights after he was caught on camera refusing to leave the field in the club’s loss to the Bulldogs when directed by trainer Hayden Knowles.

The fiery forward responded with a string of expletives at the staffer when given the directive, sparking plenty of conversation about why he had been stood down for this weekend’s match against Wests and asked to show cause.

It is widely known that fired-up forwards will often protest being substituted and that Klemmer’s actions were neither new nor grounds for being dumped.

However, the consequent digging by media outlets discovered the use of the term FEC by a Knights staff member to sign off from a conversation about Klemmer with another player, News Corp has reported.

Then, just this week, Jahrome Luai posted a cryptic Instagram post with his halves partner Cleary and the large letters FEC. Cleary had just been suspended. 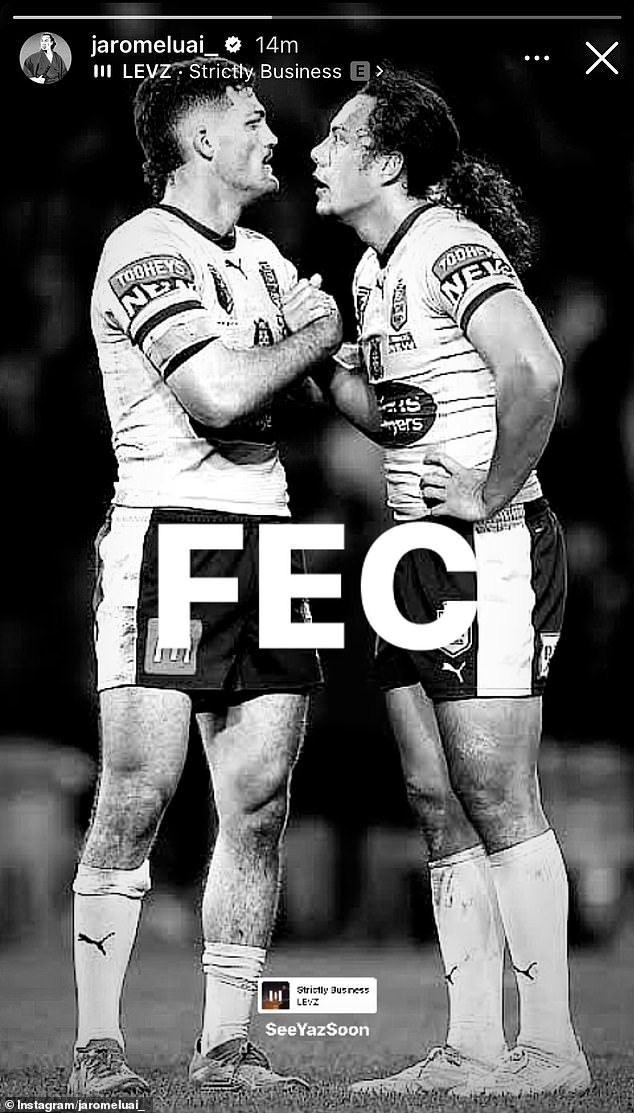 Suddenly the mystery was not so mysterious.

Go back 12 months and Luai used #FEC on an image of himself and Panthers teammate Brian To’o during their maiden State of Origin series in an example of siege mentality at its finest.

One journalist is either completely blind to the meaning of FEC, or – more likely – has dropped an excellent take that could end up proving pretty embarrassing for Penrith players.

Peter Lang is a long-term rugby league journalist with The Western Weekender in Penrith and he has called for the crowds to chant ‘FEC’ to ‘support’ Cleary and Luai when they return. 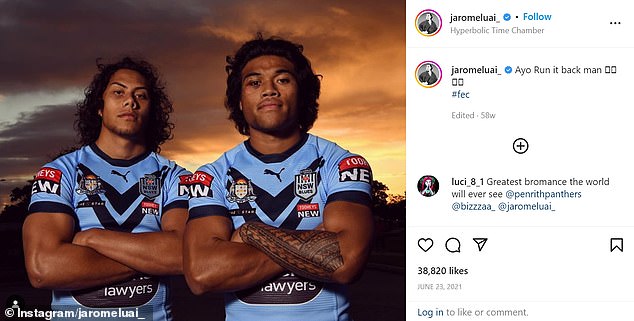 ‘I took another look at the photo and felt inspired.

‘The dream team will be back for week one of the Finals. Two ultra-competitive blokes who will use the disappointment of being injured, of being suspended, to make sure that the rest of the competition pays for it when they return.

‘I’d love to hear a chant go up from all Panthers supporters when the two of them run out of the tunnel in about six weeks’ time.

‘Don’t worry they’ll know what it means… and so will you.’