Winter can be a difficult time for runners, with the lack of daylight and sub-zero temperatures making that box set and glass of wine more tempting than thirty minutes spent jogging in the cold.

The problem is, not exercising during winter could contribute to a number of health problems, including seasonal affective disorder (SAD) – a type of depression linked to a lack of vitamin D from sunlight, as well as having less serotonin and dopamine in your body – the chemicals that make you feel good.

But if, like me, you find the sight of a treadmill inside a dimly lit gym tedious, and the fear of the middle age spread even harder to pallet, then there really isn’t much other option than getting outdoors and braving the cold.

Rod Ardehali (pictured), a MailOnline journalist and avid runner, highlights why winter training shouldn’t be confined to dimly lit gyms thanks to the body’s ability to heat up during exercise – even in the cold conditions, it can produce up to a kilowatt of heat

Thankfully, Professor Mike Tipton, a researcher in extreme environmental medicine at the University of Portsmouth explains that the amount of heat the body produces during running is more than enough to off-set the frostier conditions.

This means, even if it is freezing outdoors, you won’t be chilly for long because of the increase in metabolic heat generated from burning energy.

Professor Tipton explains: ‘If you go out for a run, most people are producing 500 watts to a kilowatt of heat, which is a lot of heat.

‘There are not very many circumstances even in light clothing where you won’t warm up when producing that amount of heat, so you can go out and exercise in these conditions.

‘At rest, the body’s basal metabolism produces about 90-100 watts of heat. When running, depending on effort and fitness levels, this can increase to a kilowatt of heat – and at the maximum levels of human endurance it can product up to twice that.’

So according to Professor Tipton, who studies the physiological and psychological responses to adverse environments, provided you’re working hard enough, sub-zero temperatures is not a good enough excuse to skip the run and binge on Netflix. 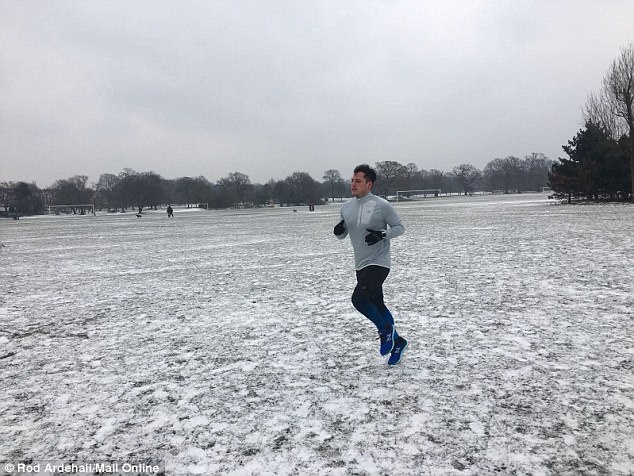 Even if it is freezing outdoors, you won’t be chilly for long because of the increase in metabolic heat generated from burning energy will warm your extremities.  Provided you’re working hard enough, sub-zero temperatures is not a good enough excuse to skip the run and binge on TV

But, he does have some tips for runners who want to maximise their winter efforts without succumbing to the cold.

‘The best forms of training in the winter is continuous exercise where you’re producing plenty of heat.

‘What I would warn against is non-continual exercise such interval training. For example, if you ran for five minutes and walked for five minutes, you would get very cold, very quickly because you would stop producing heat.

‘And with damp clothing in windy conditions you’ll get cold very quickly – so I’d be much more inclined to recommend continuous activity.’

That means High-Intensity Interval Training (HIIT), the staple of many runners’ regime gets the thumbs down because of the cooling effect associated with being static.

Having put his advice to the test over two separate snowy runs, the benefits of continual running over interval training are obvious.

A steady or fast run along my normal route has me comfortably warm within a mile or so.

The next day, HIIT training, where I run at about 80 per cent effort for a minute before slowing down to a walk or half-pace jog has me immediately warm and then suddenly quite cold again. It’s not a comfortable experience at all. 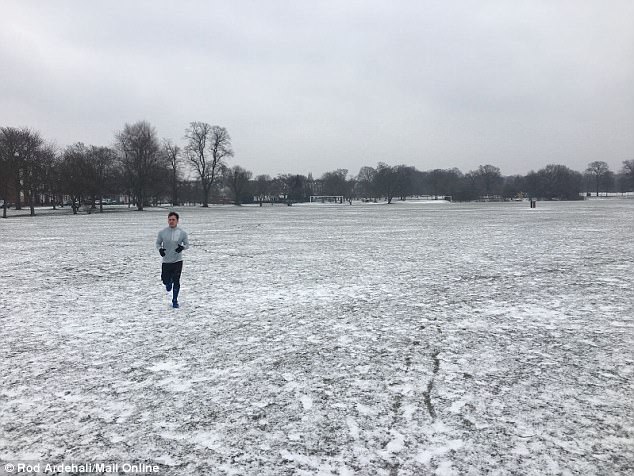 High-Intensity Interval Training (HIIT), the staple of many runners’ regime gets the thumbs down because of the cooling effect associated with being static in cold weather

Dress for the occasion

That’s where the correct clothing comes in. The urge to throw on as many layers as possible before your run, coupled with that potential kilowatt of heat produced while exercising, can quickly become a hot and uncomfortable experience.

It’s thought a lack of sunlight disrupts an area of the brain called the hypothalamus.

As a result, production of a hormone called serotonin – which affects mood, appetite and sleep – can be affected.

Lower levels caused by a lack of sunlight can lead to depression.

A pole commissioned by Innolux of 1,000 people aged 25-65 around the UK showed, when asked about the change of seasons from summer to winter:

Our eating habits also worsen, with 58 per cent of us indulging in more carb heavy foods during the winter months

Exercise also becomes more of a struggle, with 36 per cent of us less likely to make it to the gym during winter.

NHS guidance recommends getting as much sunlight as possible, exercising regularly and if appropriate, antidepressants.

The best thing a winter runner can invest in, alongside the correct pair the trainers, is suitable clothing. Moisture wicking thermal fabrics means you won’t fret about frost. While gear that has reflective elements is invaluable for post-work night time runs.

Plus, you won’t be overburdened by numerous layers of damp clothing that soon turn chilly in the cold.

On my winter runs I throw on a pair of trainers, thermal tights, a moisture wicking fleece, reflective windbreaker and gloves. That’s all you really need for these conditions.

It’s an easy trap to assume the more layers the better but if you’re toasty leaving the house, think about how you’ll feel half-way through your run when you’re producing 500 watts of heat on top of your four layers and battered old hoodie.

George Rendall, founder and coach of Mile 27, a popular running collective in London, said: ‘Running outside in winter is all about preparation. Consider investing in reflective clothing and a head torch, particularly if you’re running in poorly lit areas or next to busy roads.

‘Base layers – tights and tops – are a lightweight option for keeping yourself warm.’

While adding a word of caution for those days when ice becomes an issue.

‘If the roads turn icy, search online for some local trail routes to explore!’ 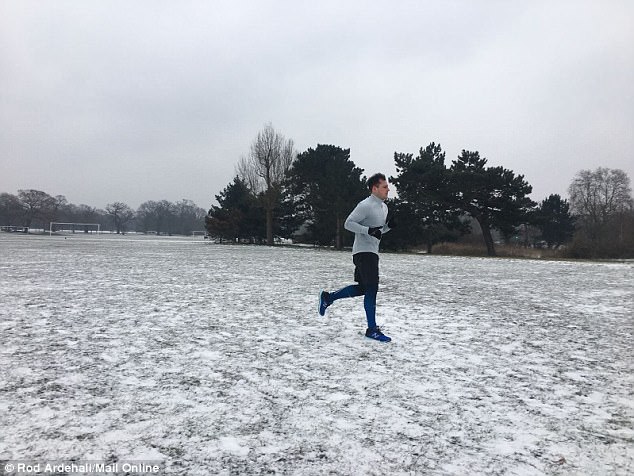 It’s an easy trap to assume the more layers the better but if you’re toasty leaving the house, think about how you’ll feel half-way through your run when you’re producing 500 watts of heat on top of your four layers and battered old hoodie

Another common mistake made by winter runners is to neglect hydration.

‘Many people don’t realise how easy it is to become dehydrated in the cold because they might not be sweating as much,’ explains Professor Tipton.

‘But there’s no moisture in the air and the steam that comes from your mouth is fluid being expelled, so it’s important to keep taking on fluids.’

A 2015 review into the effects of fluid loss on physical performance in the Journal of Sport and Health Science found decreased gross efficiency, decreased speed, decreased time to exhaustion, and decreased sport-specific skills all linked with dehydration, so don’t forget to replace lost fluids.

Running collectives like Rendall’s, who organise sessions with like-minded people have flourished in recent years because of the community element involved.

Training in packs, being encouraged while encouraging others onto new personal bests and goals is a great way to stay motivated and break up the monotony of winter runs.

A 2014 study by Public Health into the effects of ‘mass community participation events’ such as 5k Park Runs showed a 10 per cent increase in speed from runners’ first attempt to their best effort across the whole spectrum of entrants.

So in the end, whether you fancy yourself as the next Mo Farah or are just an enthusiastic amateur like me, the body’s ability to generate heat means you really shouldn’t sweat the cold when it comes to running outdoors in the winter. 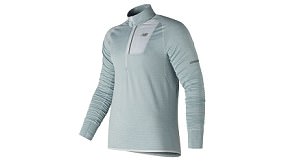 NB Heat Half Zip, a staple of my wardrobe 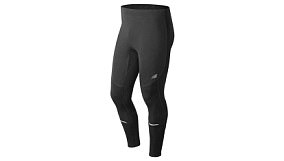 NB Heat Tights, a must for winter runners 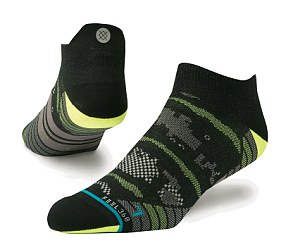 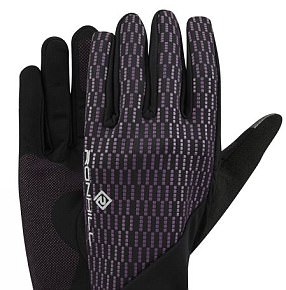 This half zip gridded fleece is a staple of my running wardrobe thanks to its ability to wick away sweat while holding in heat. Plus it’s reflective patches give me confidence on those post-work evening runs.

Gone are the days when running tights were sneered at by hardened bare-legged joggers. These are a must for every winter runner needing protection from heat-sapping winds.

You may not think fitness watches are winter specific but come those cold nights when motivation is running low, the personal coaching mode, heart rate monitor and activity tracker on the Fitbit Ionic provide enough data and incentive to keep newbies and professionals alike in the zone.

It’s very easy when picking the right base layer or fleece to overlook the extremities. But the hands and feet will feel the chill the most so invest in a good pair of performance socks like these. Padded, vented and reflective, they’re a seriously outstanding piece of kit for something so small.

Wind blocking gloves are really useful but the best feature here is the touch screen capabilities. There’s no surer way to ruin a runners’ stride that having to take off gloves mid-jog to change song or answer a call. These gloves take the hassle out of that and come with reflective options too.