‘This ice cream is amazing,’ says Stan, smiling from ear to ear, half his gelato smeared across his face in a broad sweep of strawberry and vanilla.

I couldn’t care less about the messy state of my seven-year-old son, because we are sitting in a plaza in the historic Italian city of Verona. And we are thoroughly enjoying ourselves.

As anyone with school-age children will tell you, the hunt for the perfect family holiday can be perilous. My husband and I have tried many a destination in a bid to keep all of us — nine-year-old Frank, as well as Stan — entertained. Not always with success.

Blue is the colour: Claire’s family stayed at Cisano San Vito, on the south-east edge of Lake Garda

A chic week in Paris? ‘Too much walking, too many paintings,’ according to our sports-mad boys.

A football-themed Easter trip to Barcelona? Brilliant fun for 75 per cent of the family. Utterly boring for me.

But then, friends boasted about Eurocamp’s ability to keep whole families entertained and it sounded plausible. This family break specialist offers 180 parks across Europe. One of them, surely, would be right for us.

We plump for Cisano San Vito, on the south-eastern edge of Lake Garda, in northern Italy.

We arrive to find a scene certain to make any parent happy: a sturdy mobile home with full cooking facilities (no messing around with tent pegs and gas-burners) and its own private bathroom. Under trees and with a wide deck, the two-bedroom air-conditioned accommodation is within walking distance of the lake itself. 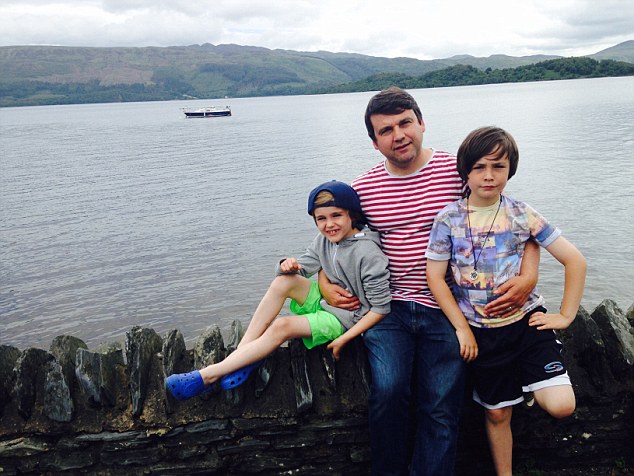 Three pools, with a host of giant waterslides and a lively kids’ club (with mostly free activities, including arts and crafts, swimming and cycling) are all a short stroll away.

Verona is only 18 miles away — and this year, it is commemorating the 400th anniversary of Shakespeare’s death. The Bard, of course, set Romeo And Juliet in Verona.

We settle in quickly. By the second evening, the children have somehow managed to hook up with a whole gang of new pan-European friends (British, Dutch and German). Never mind that they don’t speak each other’s languages — they bond over a shared love of Lionel Messi and water pistols.

And while they make the most of the pool (after raiding the on-site supermarket for inflatables), I am able to snooze under the Italian sun. Bliss.

When Frank and Stan tire of swimming, there are football training sessions, sandcastle contests and ping-pong tournaments — while I dream of Verona, all lofty church spires, Montagues and Capulets, and European elegance. 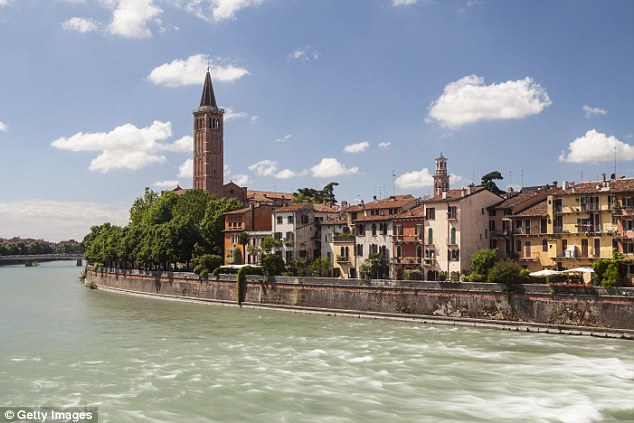 Small yet perfectly sized: Verona is not a huge city, but it has a very picturesque charm

Prising the boys away from the park is not easy. It is only the bribe of premier ice cream that swings it.

Verona is not big. It is not Milan or Rome — and it certainly doesn’t have the clutter and chaos of Naples. But what it lacks in size, it compensates for in grandeur.

We sample a rich array of centuries in the space of a few hours — driving in past medieval walls and over bumpy, cobbled streets.

The famous balcony at Casa di Giulietta leaves me a little cold — perhaps unsurprisingly, as it is a 20th-century addition to a 13th-century mansion on the Via Cappello. Romeo did not come a-wooing here.

But the Roman amphitheatre, on Piazza Bra, feels more authentic, and splendid value at £16 for a family of four to eat. As the children run around and pretend to be gladiators, we marvel at the pink marble and the sheer scale of the place. Souvenir swords in hand, we take our pick of cafes decorating the square outside, and cool off with iced limonata and stellar ice cream.

As the boys chat away, no doubt plotting their next waterslide adventure, we sit back and enjoy a rare moment of calm. And when Stan asks for a second gelato? Well, who am I to say no.

Travel Facts: Plan your own family escape to Italy