Why these natural birth control methods are ridiculous

A viral tweet that appears to list ‘natural birth control options’ is being slammed by doctors as unsafe and outright dangerous.

The tweet, which has since been deleted, contains a graphic that recommends consuming several fruits and herbs including papaya, figs and ginger both prior to and after unprotected sex.

It suggests that using the plants instead of traditional contraceptives – like the pill, the patch or an IUD – will prevent pregnancy and even cause ‘self-abortion’.

But Dr Tarun Jain, medical director of Northwestern Medicine Fertility and Reproductive Medicine Oakbrook Terrace, told DailyMail.com that these remedies are ineffective at best and deadly at worst.

The tweet, which had more than 14,000 likes, listed 10 supposed natural birth control methods.

Some of the suggestions are not harmful – such as papaya, figs, ginger and wild yams – but certainly won’t prevent pregnancy.

‘It’s fascinating because, in the tweet, they give dose-like recommendations,’ said Dr Jain.

‘I don’t know where they came up with these claims but I’m not aware of any studies that show that they prevent pregnancy.’

However, others suggestions are very dangerous and even toxic.

Pennyroyal is often used in pesticides, and can cause multi-organ failure and death, according to Memorial Sloan Kettering Cancer Center in New York City.

It has been known to induce miscarriages, but such doses are lethal and can injure or kill the mother as well as the fetus. 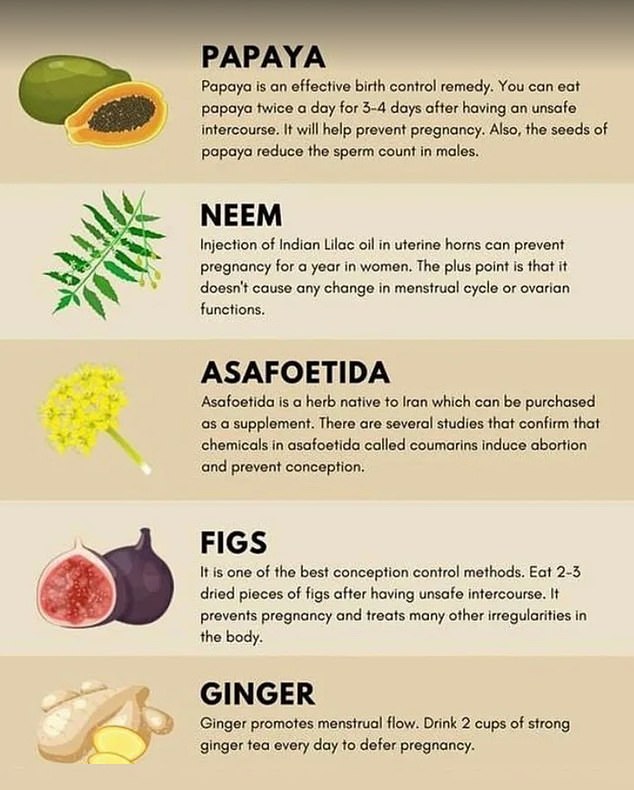 Some of the suggestions are not harmful – such as papaya, figs, ginger and wild yams – but certainly won’t prevent pregnancy 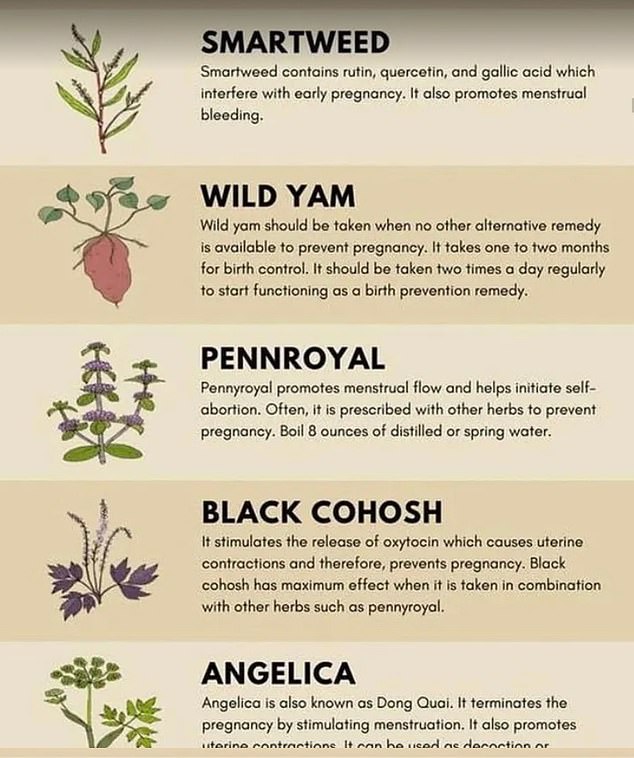 Other suggestions, like consuming the herb pennyroyal, can result in multi-organ failure or an induced miscarriage

Research has linked ingesting large amounts of the compound with liver toxicity and increased risk of cancer.

Additionally, when it comes to black cohosh, the National Institutes of Health says that there have been several cases of liver damage reported in people who use products that contain the plant.

‘It’s dangerous to consume something that could even induce such an effect,’ said Dr Jain. ‘Who knows what else it could do?’

Not long after the initial tweet went up, several users responded, slamming the information as incorrect and dangerous.

‘Stop misinforming people, these do not work as contraceptives and it’s cruel to make people think they do,’ one user wrote. ‘ALSO don’t forget about STDs!!!!’

‘As a botanist I can tell you this tweet with 1000s of shares could result in the deaths of women,’ user James Wong tweeted. ‘It needs taking down, fast.’

This is not the first time that suggestions of ‘natural’ contraceptives have spread across social media.

Several Instagram accounts have posted photos of fruits or plants with the hashtags #naturalbirthcontrol #herbalcontraceptive and #naturalcontraceptive.

‘These are not based on science, and these are dangerous recommendations,’ Dr Jain said.

‘Such information should not be propagated. There are many other great alternatives based on science that are very effective.’