The remarkable story behind a photo of a battered rubbish bin sitting on a kerbside has astounded thousands of Australians.

The red-lidded bin, held together with gaffer tape, belongs to an Adelaide woman who put it out for collection on Monday – for the first time in 18 months.

Trudy Conroy, 56, took that long to put out her bin because that’s how long it took her to fill it.

The red-lidded bin, held together with gaffer tape, belongs to an Adelaide woman who put it out for collection on Monday – for the first time in 18 months 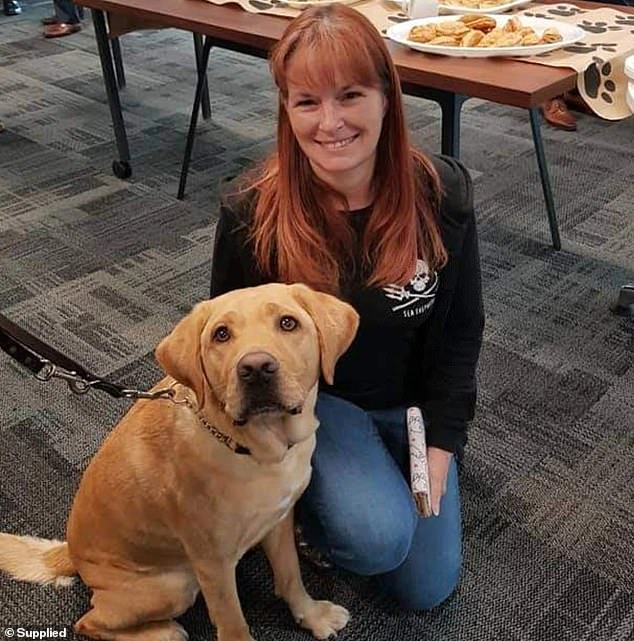 Trudy Conroy, 56, treats the bin as a last resort. ‘Every time I have something I think “where can this go other than the red bin?”‘

That’s right, Ms Conroy took a year and a half to fill her standard 140-litre waste bin, whereas many Aussies struggle to contain their garbage in the same-sized bin each week.

1- Does it have to be thrown out? Would anyone else find it useful? There are ‘buy nothing’ Facebook pages and lots of things can be ‘rehomed’. If it can’t be given away, research recycling options.

2- Planet Ark’s Recycling Near You is an awesome resource!

Enter your post code and what you want to recycle, it’ll give you options for recycling paths.

3- Consider using less packaging – lots of eco friendly places now sell in bulk so you don’t end up with packaging.

‘I am proud of it actually,’ Ms Conroy, a data analyst, told Daily Mail Australia.

‘But next time I want to go for two years before I fill it I reckon.’

Instead of tossing what most people consider rubbish into the bin, Ms Conroy treats it as a last resort.

‘Every time I have something I think “where can this go other than the red bin?”‘

She bought a composter which takes anything organic including food scraps and paper.

She believes most people over-fill their bins just because they don’t know there are other options.

‘Hell yes, people are really surprised when they realise you can put most of your rubbish somewhere else.’

For her that means recycling, composting, buying in bulk, donating and finding places that will accept used goods like old printer cartridges or unwanted CDs.

She is a big fan of Planet Ark’s website Recycling Near You.

‘If you pop in your post code and what you want to recycle, it’ll give you options for recycling paths.

‘Many things I wouldn’t have thought would be able to be recycled like plastic biscuit trays, they can go in the kerbside recycling bin.’

‘I was really happy when I found out the kitty litter can go in the green bin.

‘Before I found out, that would have been the main thing going in my red bin.’

She has two cats, Max and Jake, who she admits don’t much care what she does with it. 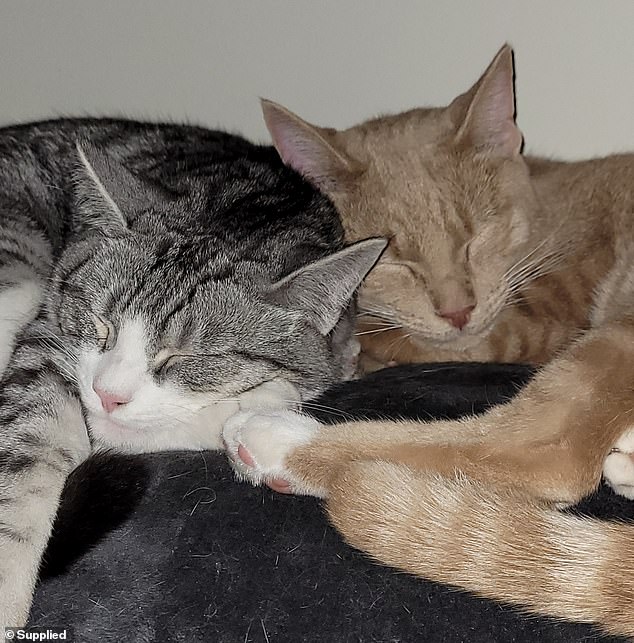 Ms Conroy said she was happy to learn that her cat’s kitty litter can go in the green bin, though she admits her cats – Max and Jake (pictured above) – don’t care where it goes

Ms Conroy’s neighbours do care though, especially as she’s letterbox-dropped them offering to pick up recyclable items.

Helping her neighbours recycle helped her make friends in her Adelaide street.

‘One lady baked me some pasties to say thanks,’ she said.

So if Ms Conroy can get rid of almost anything, what was in her bin in the end?

One of the main ingredients was waxy microwave popcorn bags.

‘I eat quite a lot of that,’ she admitted.

She reluctantly put an old pillow in the bin –  only after trying to give it away or even just the stuffing inside it.

‘I got no takers. I was heartbroken.

‘I thought this is going to take up so much space.

‘There were also odd bits of packaging, things I cant recycle, like twisty ties.’