Why this Thai restaurant is eternally busy

The finest food often comes from the shabbiest places, dishes that delight in spite of their less-than-salubrious surroundings – that wobbling oyster omelette, devoured in the fetid, sewer-scented backstreets of Bangkok. Or tacos al pastor, grabbed from little more than a dingy hole in the wall, gobbled among the fag smoke and diesel fumes of a Mexico City street.

I’ve eaten chana masala squatting in a grubby shack perched, precariously, on the edge of a Madhya Pradesh trunk road, the chickpeas seasoned with chilli, fried onion and the deafening clatter of a thousand Tata trucks. And ma-po tofu, studded with soft chunks of pig’s brain, from the sort of Chengdu food cart you wouldn’t want to bump into on a dark night. In fact, the best ceviche I’ve ever eaten, indecently fresh and immaculately seasoned, was gobbled with glee in a Lima ‘restaurant’ that consisted of a few wonky tables plonked down in the chef’s nondescript sitting room. 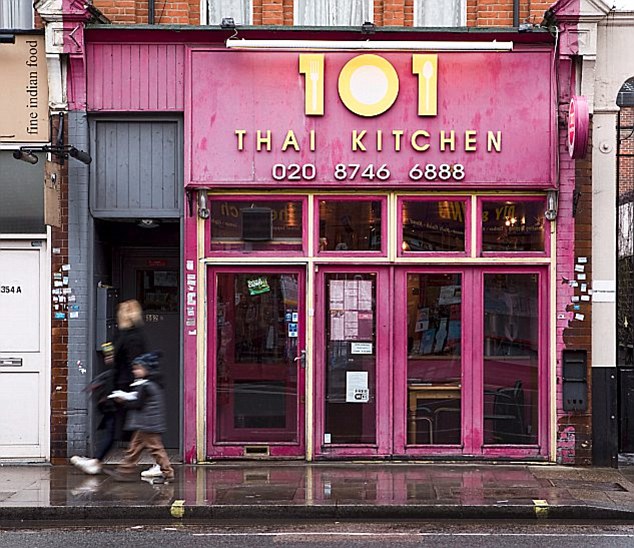 101 Thai Kitchen in Hammersmith. Basic it may be but it’s scrupulously clean and eternally busy

So while I occasionally crave the soft-carpeted opulence of Wiltons, say, or The Wolseley’s high-ceilinged splendour, I always favour good food over fussy fittings. Which is lucky, as 101 Thai Kitchen, a small Thai restaurant on Hammersmith’s King Street, is unashamedly utilitarian. Tables are made from cheap pine, the chairs seemingly swiped from a Milton Keynes conference centre. Walls are daubed in various shades of garish pink, and clad in token Thai prints, along with a few stock photos of over-scrubbed food. A television sits high up in one corner, transmitting a heady mixture of Thai soap operas and frantic cooking slots. There’s a small bar, with a large, Coca Cola-branded fridge and a hand-sanitiser by the door. As ever, diners sit beneath portraits of the Thai king, both late and current.

Basic it may be but it’s scrupulously clean and eternally busy. Because this is a place that serves up some of the best Thai food I’ve eaten in London. No edges are smoothed here, and there’s little concession to timid Western palates. Take their lab ped, the classic northern salad, here made with duck. Meat, offal and skin are all tossed together. So soft liver meets the crunch of roasted rice powder in a dish where the dried chilli burns slow and fierce. Yet a sharp acidic slap of lime, along with tangle of coriander and a handful of mint, lifts every mouthful. Thai food is about balance, of the sweet, hot, salty and sharp. This dish has it all.

But it’s the dishes of the south, where chillies are used with reckless abandon, that really shine. I once spent a few days down there with David Thompson, author of the magisterial Thai Food, and a man who trained the new generation of chefs behind the likes of Som Saa, The Smoking Goat, Farang and The Begging Bowl. We crammed in about 20 meals a day, perched on precarious plastic chairs at tiny street stalls, or sat on fragile benches in threadbare curry shops, our tongues swollen with capsaicin, our faces plastered with sweaty delight.

And here, in the heart of Hammersmith, one spoonful of the sour prawn curry transports me straight back. It has a bracing sharpness, and a sly pungency too, the discreet whiff of the drain. There’s cauliflower in there, and snake beans, bamboo shoots, and a brutal chilli paste that is tempered by the sour. Again, blissful balance, with a back note of pure edible menace. 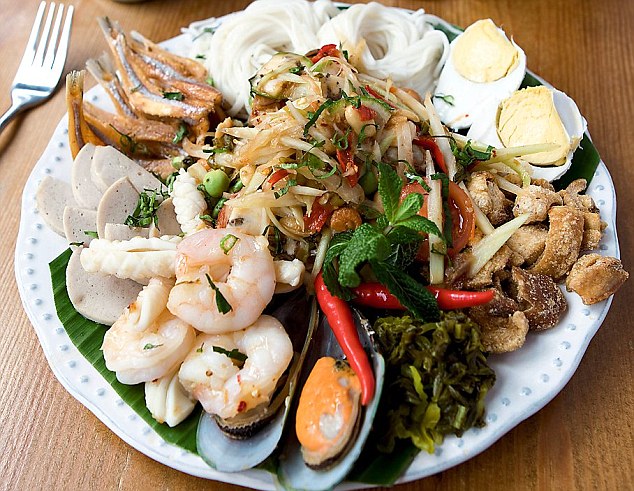 Fans of som tum, that green papaya salad from the northern Isarn region, can choose from a heady 11 varieties

Kua gling is another southern classic: minced pork dry-fried with green peppercorns, lime leaves and industrial quantities of chilli. So much that it has to be taken slowly, one mouthful at a time, followed by a fistful of sticky rice. And a cooling bite of lettuce, a curl of pork crackling, a handful of herbs (classic Thai accompaniments), all served in a cheap metal bowl – something, anything, to mop up the infernal heat. Yet while the spicing may be vicious, there’s a freshness to the dish and a herbal complexity that lifts it far beyond the merely painful.

But it’s not just about the burn. Plump, home-made Isarn sausages, served with fresh chillies, peanuts and coriander, have a beautiful fermented tang, a sharpness that contrasts wonderfully with the farmyard honk of pig. Chewy, sweetish salted beef is mild but addictive, while fans of som tum, that green papaya salad from the northern Isarn region, can choose from a heady 11 varieties, ranging from the basic, with dried shrimp, right through versions with pickled crab, pla ra (a super- fermented fish sauce), Thai white sausage and salted duck egg. As you’d expect, flavours are big, but the balance is sublime.

Add in the incredible value of the place, along with swift, efficient service, and it’s easy to see why I’m in there most weeks. 101 Thai Kitchen might not look like much. But when it comes to the food, hold on to those hats. This place will blow you away.

Lunch at Itsu with my son. Chicken noodle soup. As ever. Then dinner at Bellamy’s with my mother. Smoked salmon, then veal kidneys in mustard sauce. Ever fine.

BP banquet with my father on the way to Northumberland. Prawn sandwiches, scampi fries.

Braised beef shin and mashed potato for lunch. Then quail, and lobster and scallops in sublimely buttery sauce for dinner. Wonderful.

A fine chicken pie. And banoffee pie. Plus an excess of Vacherin for lunch. Dinner, nachos and cheeseburger in front of Wind River. Good food, good film.