When TV maths whizz Professor Hannah Fry was diagnosed with cervical cancer last year, aged just 36, following a routine smear test, she, like many women in her situation, barely paused to consider her treatment options.

‘The tumour was the size of a gobstopper,’ she told a documentary for the BBC’s Horizon last week. ‘In that moment, I just wanted it out.’

Hannah, who has two young daughters, underwent a radical hysterectomy, which removed her uterus, cervix, both ovaries and fallopian tubes. Surgeons also advised her they would have to remove the lymph nodes in her pelvis.

These tiny, bean-shaped structures, also found in the armpits, neck and chest, are a crucial part of the immune system. They filter fluid to and from all cells in the body via the lymphatic system, a network of tiny tubes and vessels. But this means that they can also be a conduit for cancer cells, allowing them to spread around the body. This is why they are removed.

When TV maths whizz Professor Hannah Fry was diagnosed with cervical cancer last year, aged just 36, following a routine smear test, she, like many women in her situation, barely paused to consider her treatment options 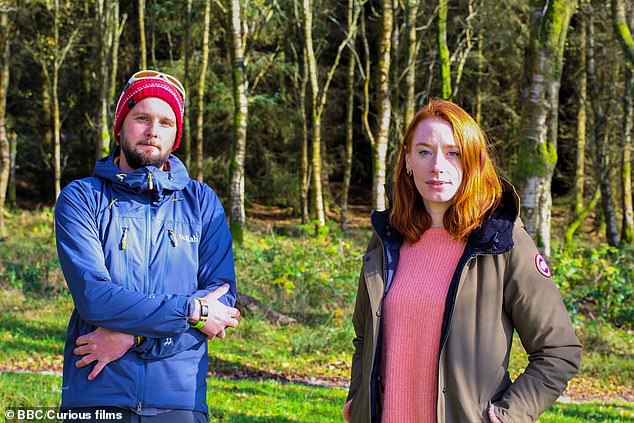 Hannah, who has two young daughters, underwent a radical hysterectomy, which removed her uterus, cervix, both ovaries and fallopian tubes. Surgeons also advised her they would have to remove the lymph nodes in her pelvis 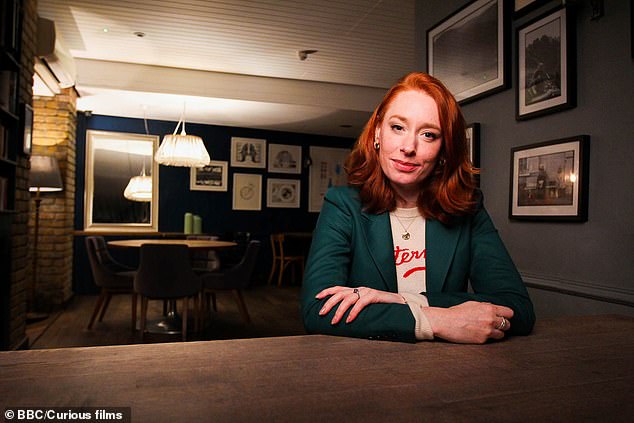 In many gynaecological cancers, the nodes in the pelvis are one of the first places they migrate to.

Hannah was, on the face of it, lucky. Although several nodes were swollen, they weren’t cancerous. If they had been, her chances of survival would have been dramatically reduced. But what she had not anticipated was that she would be left with a debilitating, lifelong problem as a consequence of the surgery: lymphoedema.

The condition, which causes legs or arms to swell severely, is thought to affect about 400,000 people in the UK, most of them following cancer treatment. As many as one in four women who have a radical hysterectomy go on to develop it, while it also affects women who have lymph nodes in their armpits removed as part of breast cancer treatment.

Men who have radiotherapy in the groin for prostate cancer are also at risk.

And the symptoms can, for Hannah and many others, be worse than those of cancer itself.

Removal of lymph nodes effectively blocks the system, so lymphatic fluid can build up in the arms or legs, causing them to balloon. Some people find one limb swells much larger than the other, and the condition can be distressing as well as uncomfortable, having a huge impact on mobility, self-esteem and mental health.

Over time, the skin in affected limbs starts to toughen and the tissues become thicker and more scarred. Excess fat is also retained, which will stubbornly remain regardless of diet.

How quickly this happens varies from person to person, but it can take several months or many years. Not only does it cause worsening mobility problems, but it can make people more susceptible to life-threatening infections of the skin and sepsis, a potentially fatal reaction to infection. 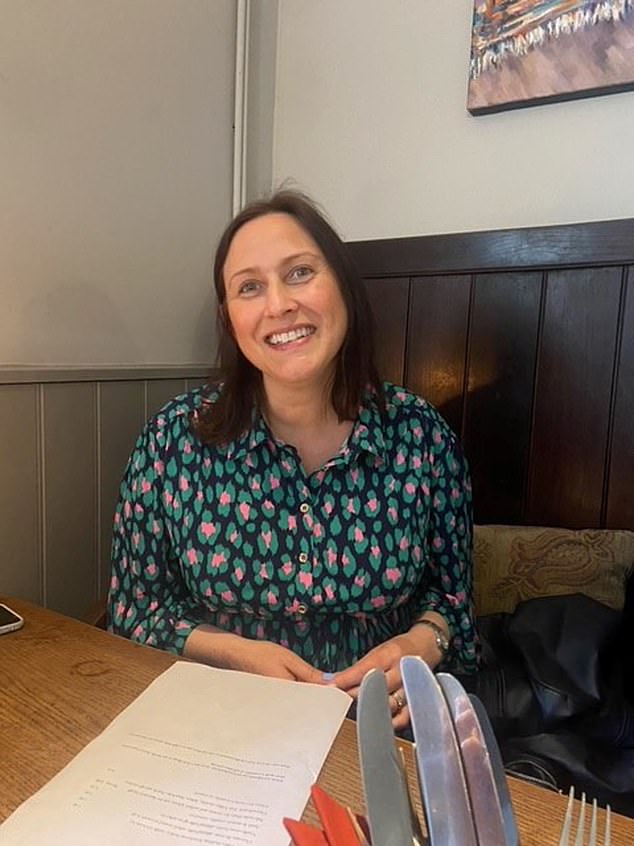 In Hannah’s case, it was her right leg that was affected. ‘It feels very sensitive to the touch, full and tight,’ she said. ‘It’s not painful – it’s just really uncomfortable. Is it too much to ask that I wasn’t left with a lifelong chronic condition?’

This is, unfortunately, part of a wider problem in the NHS. Treatment for cancer focuses on the disease itself and then on preventing its return. But the consequences of treatment – such as limb swelling, hair loss and issues like sexual dysfunction – often take a back seat. Cancer charity Macmillan found that 40 per cent of cancer survivors say they feel ‘abandoned’ once their active treatment ends.

A range of treatments are available that seek to manage lymphoedema and reduce the swelling, however. NHS guidance is to first try compression and a very gentle form of massage, known as lymphatic drainage, to help stimulate the circulation and reduce the fluid build-up. GPs can refer those suffering from the condition to lymphoedema clinics, which can fit compression garments – tight-fitting sleeves for the legs, or stockings for the arms, which must be worn for most of the day. 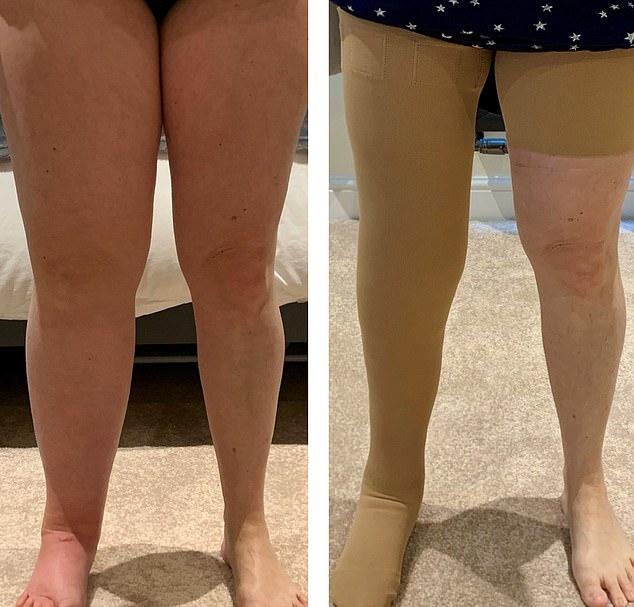 Ms Iles underwent surgery following her cancer treatment to alleviate the symptoms of her lymphoedema. Her right leg and ankle swelled up, left, before her latest treatment

These come in various grades of pressure and are designed to limit the amount of fluid that can build up. They also encourage fluid along the limb towards the torso, where active, undamaged lymphatic channels may then help drain it away. None of these offers a cure, and they work best in the early stages of the condition – once there is a build-up of fat and more fibrous tissue, neither compression nor massage will work.

There are alternative treatments available that offer a more long-term solution, but they are rarely performed, if at all, on the NHS. Prof Fry is one of the lucky ones who sought treatment at the privately run Oxford Lymphoedema Practice. Her surgeon, plastic surgery specialist Alex Ramsden, says between 60 and 70 per cent of his patients have developed the condition following gynaecological surgery. ‘One of the most extreme cases I’ve treated had one leg which had swollen to three times the size of the other,’ he says. ‘Patients often say they’ve had all this care and attention for their cancer, but when they develop lymphoedema they’re told, “Sorry, there’s no cure, here are garments to wear for the rest of your life.”

‘It’s common for people to get very upset and more traumatised by the lymphoedema than the cancer. And yet there are alternative treatments.’

The treatments vary according to the severity of the lymphoedema. As Prof Fry was in the relatively early stages, she benefited from reconstructive surgery called lymphaticovenular anastomosis. The £15,000 procedure, which can be carried out under local anaesthetic, involves creating a bypass that allows lymphatic fluid to drain out of the affected limb and into a vein.

Doctors first carry out a scan called a lymphography, which involves injecting a dye that glows under infrared light, in order to map out the lymphatic channels, which sit within a centimetre of the surface of the skin. The veins of the leg are also mapped out in an ultrasound scan. Several small areas are identified where the lymphatic channels and a vein are situated close together.

A small incision is made in each place, and the surgeon diverts a lymphatic tube into the vein – using stitches thinner than a human hair to join tiny tubes less than a millimetre in diameter. Patients can walk out of hospital the same day.

Mr Ramsden says that ‘around 85 per cent’ of patients will benefit from this, particularly if it can be carried out within six months to a year of a lymphoedema diagnosis.

Those who have progressed slightly further can opt for a procedure called a lymph node transfer. This involves removing lymph nodes and their surrounding blood vessels from another part of the body and implanting them into blood vessels within the affected leg or arm.

The operation, which also costs about £15,000 and must be performed under general anaesthetic, does come with a one in 100 risk of developing lymphoedema in the area the lymph nodes are removed from. And compression garments still have to be worn for several months afterwards to allow the transplanted lymph nodes to have an effect.

But a recent trial revealed that 36 patients having the surgery had much less swelling and infection than another group which was treated with only compression garments and physiotherapy.

The last option, which is the best treatment for people with advanced lymphoedema who have a lot of fat build-up, is a form of liposuction called suction assisted protein lipectomy.

Tiny incisions are made on the affected limb, and a suction device used to remove the fat. The procedure can extract four or five litres of fat – far more than cosmetic liposuction – and requires a general anaesthetic and a stay of several days in hospital. Patients will need to continue to wear compression garments in the longer term to stop the fluid and fat returning, but it does significantly reduce the swelling and improves mobility.

One patient to benefit from this is Vicky Iles, who had a hysterectomy and lymph node dissection – which removes selected lymph nodes to check for cancer cells – in 2010, when she was diagnosed with cervical cancer.

Several months later she developed lymphoedema in her right leg, which gradually swelled until it was 41 per cent bigger than her other leg.

The 49-year-old mother-of-two, who lives with husband Richard in Bristol, had liposuction at the Oxford clinic in January which removed five litres of fat. ‘This wasn’t about vanity,’ she says.

‘It was about being able to live my life normally. I’d had a terrible infection, which left me on intravenous antibiotics for six weeks. I was referred to a specialist NHS centre at St George’s in London but I had to wait 13 months, by which time the infection had gone.’

The doctors then suggested putting Vicky on antibiotics for life, which she didn’t want.

She adds: ‘When I went to the clinic in Oxford it felt, for the first time, that I was speaking to someone who understood the condition and wanted to help.

‘I have spoken to women who have struggled to even get compression garments on the NHS, and my doctors never even mentioned that there were surgeries available.

‘It’s really a postcode lottery – we’re supposed to just be grateful that we’ve survived the cancer.

‘For me, cancer was a short-lived thing and eradicated quickly. But lymphoedema has been with me now for 12 years and it’s been a daily battle.’

When the condition was at its worst, Vicky changed the way she dressed, using skirts and dresses to hide the asymmetry in her legs.

‘I struggled going to the shops or out anywhere – I’d have to make sure I could sit down somewhere,’ she says.

‘As the fluid built up, my mobility decreased and eventually I was crawling up the stairs. My self-esteem really took a hit.’

Since her op, Vicky says: ‘Everything is so much easier now. I can now walk up the stairs instead of crawling on all fours.

‘I am excitedly looking forward to city breaks as I will now be able to walk to see the sights, something that I would not have been able to do prior to my procedure.

‘I will always need compression garments and will never be completely free from lymphoedema, but the surgery has improved my life immeasurably.’

NHS guidelines say that specialist centres should offer liposuction on a case-by-case basis to patients whose condition has not responded to treatment with compression and massage. But in reality it is rarely offered.

Neither lymphaticovenular anastomosis nor lymph node transfers have been assessed by NHS watchdogs, despite being performed internationally with good results.

Mr Ramsden says NHS trusts have failed to see the condition as a priority. ‘It basically comes down to resources,’ he says. ‘Lymphoedema is often viewed as a complication of treatment, when it’s actually a consequence of it.

‘We know that some people will be at a higher risk of developing it – those who have had most of their lymph nodes removed – so we should be screening those patients to check for early signs of the condition so we can intervene with treatment before it progresses.’