Why Victoria’s Covid-19 cases DOUBLED in just one day to a record high of 51,356 infections

EXPLAINED: Why Victoria’s Covid-19 cases DOUBLED in just ONE day to a record high of 51,356 infections – and it means everyone can breathe a sigh of relief

The doubling of new COVID-19 case reports in Victoria to 51,356 is based on the delayed reporting of cases that are up to a week old, according to the state’s health minister.

But Health Minister Martin Foley has told reporters only about a quarter (5923) of Saturday’s positive RAT results were from the latest 24 hour reporting period.

The doubling of new COVID-19 case reports in Victoria to 51,356 is based on the delayed reporting of cases that are up to a week old according to Health Minister Martin Foley (pictured, a health worker administers a PCR test in Melbourne)

‘We’ve had, as we expected, a very big response to the pent up demand that we knew was out there,’ he said.

‘That doesn’t mean that the new daily case figure has doubled in the course of 24 hours. What it means is it’s give us a realistic picture of transmission in the community.’

Victoria is the first jurisdiction to introduce a hotline and online reporting system for RATs, with the system going live on Friday.

It was set up after the PCR testing regime came under extreme pressure, with suspected cases queuing for hours to get tested and results taking several days to come through.

Despite this, Saturday’s figures include a further 24,928 cases identified through PCR lab tests, of which more than 89,000 were conducted.

Mr Foley gave assurances that the spike in numbers would stabilise over time and give a more accurate picture of the spread of the Omiccon variant. 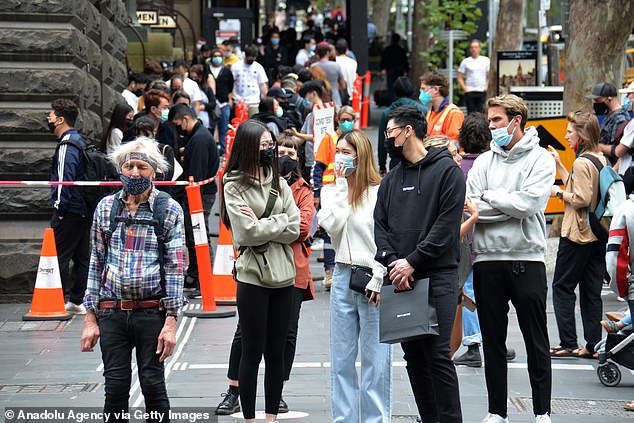 ‘This is in many respects exactly what we wanted to happen,’ he said.

Of those, 109 people are in intensive care and 22 on ventilation.

It is expected the RAT reporting system will be able to handle more than 50,000 positive results a day, but the mostly self-administered tests are still proving difficult to find in pharmacies and supermarkets.

Anyone who tests positive using a RAT will be classified as a ‘probable’ case and must isolate for seven days and notify their contacts. They will receive the same clinical and financial support as PCR confirmed cases.

The Victorian government has ordered 44 million tests and some state-run testing clinics are handing out RATs for asymptomatic people to use at home.

Bookings are also open for children five to 11 to be vaccinated, with 25,000 appointments taken up in the 24 hours after bookings opened and the program to begin Monday.

Restrictions have also been reintroduced, including density limits of one person per two square metres for indoor hospitality and entertainment venues.